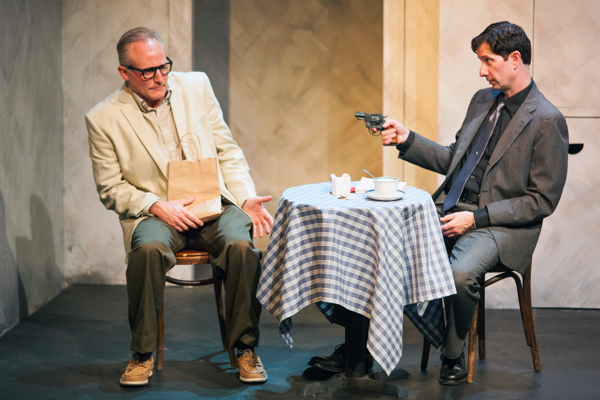 In the second part of its fourth year, the St. Louis Actors' Studio production of the LaBute New Theater Festival succeeds in providing exceptionally well-articulated pieces that push realism to an exaggerated effect. Theatergoers expecting part two of this year's festival to be a continuation of part one are in for a surprise, and in this reviewer's opinion it's a good one.

In part two, the relationships and situations are hyper-real. Interpretations of myths and stories we've shared, some for hundreds of years, are brought to life in contemporary, essentially realistic situations that are pushed to the edge of plausibility and beyond. The combination is a little heady at times, but enticingly so, like a decadent dessert layered with unexpected flavors.

Life Model, by Neil LaBute, directed by John Pierson, opens both parts of the show, and once again features intriguing performances by Bridgette Bassa, as the model, and Jenny Smith, as the artist. Does the act of putting pencil to paper make one an artist, no matter the quality of the output? Is the act of disrobing, of taking one's clothes of for money, a form of prostitution, no matter the purpose or what follows? I don't know if it was familiarity or continued exploration by the actors, but I found my second viewing of the piece to be more aggressive and pointed in a way that enhanced the viewing. The arguments are well formed and the conclusion clear, though without a definitive winner.

American Outlaws, by Adam Seidel, also directed by Pierson, considers the logical ramifications of associating and working for organizations that exist outside the law. David Wassilak is a hired gun, Eric Dean White is a CPA paying off his gambling debts with a little money laundering. The two men inhabit their stereotypes while creating believable characters, towing a fine line that builds moderate suspense. White is humorously nervous and uncertain, Wassilak is calm, cool and collected. Both men are in love with White's wife, only one of them can have her.

A Show of Affection, by Laurence Klavan, directed by Patrick Huber, is a satisfying take on the vampire myth. There's a surprising twist to these vampires in that they only prey on loved ones. The significance might not immediately sink in, but realization comes with a tinge of sadness. Dad Wassilak, Mom Emily Baker, and their twin children, Bassa and Ryan Scott Foizey, are about to celebrate Thanksgiving dinner but are distracted by strange goings on in the neighborhood. Vampires are taking over, and the family is not left unscathed. Baker leads the way with a flawless take on a woman transformed. From the arch of her eyebrow to the lilt in her voice, the affectations are unnaturally natural; and Bassa and Foizey follow her lead to humorous effect. The short piece is sitcom funny and the performances artfully exaggerated.

The final piece in the festival, Blue Balls, by Willie Johnson, directed by Huber, is equally comic and uncomfortable. Foizey is the twenty-something, wheelchair-bound son of White’s date. He might be a touch bitter, he is definitely in the mood to push White's buttons. Foizey's character would be sympathetic if he wasn’t so determinedly contentious, while White is appropriately milquetoast. Huber and Foizey keep the character from being completely obnoxious, and White finds dimension in the boyfriend. The sparring between the two, Foizey's constant jabs and White’s continued deflections, is sharply directed and convincingly performed.

The four plays in the LaBute New Theater Festival: Part II, in performance at the St. Louis Actors' Studio through July 31, 2016, are individually compelling. Presented together, they create a provocative show. If part one of the festival looked at relationships from multiple angles, part two looks at them through a carnival glass prism.