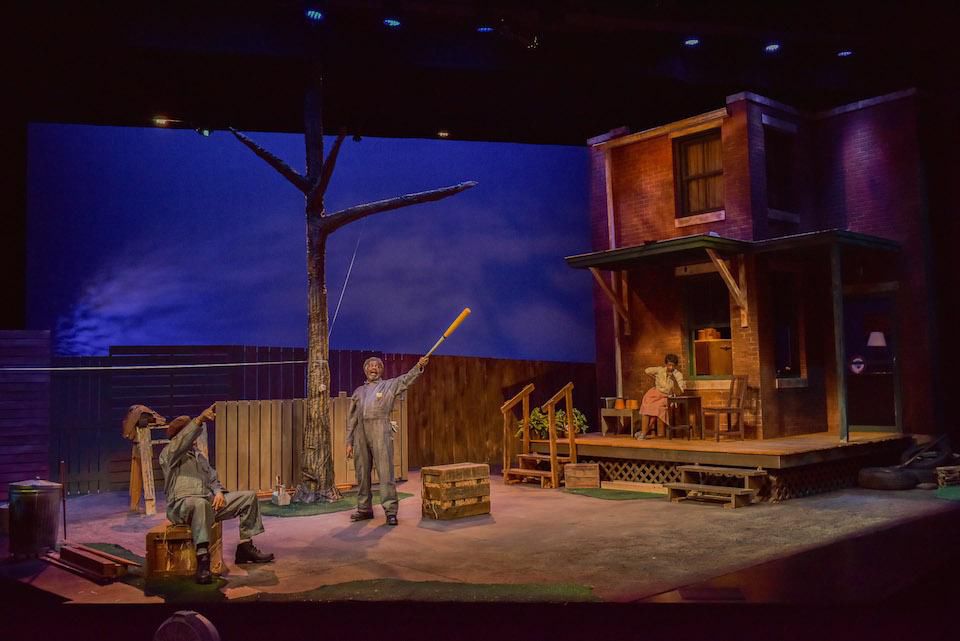 In 'Fences' the realities of racism and segregation leave a bitter taste, resulting in a moving production

The Black Rep continues its exploration of acclaimed playwright August Wilson’s canon with a finely wrought, hard-hitting production of Fences that explores the lingering impact of racism through the eyes of Troy Maxson. Heavy with dreams dashed and deferred and the cumulative anger of years of abuse and disrespect, the play is pointedly sharp and unflinchingly resolute.

A star in the Negro Leagues, Maxson was too old to play for a Major League Baseball team when the game eventually integrated, a fact he continues to challenge many years after his last plate appearance. He presently works as a garbage man in Pittsburgh and lives in a modest home with his wife Rosy and teen-aged son Cory. Cory is athletically gifted like his father and has a chance to be recruited by a university coach. Maxson has another son, Lyons, from a previous relationship, and a brother, Gabe, who frequently visit the family.

Angry and distrustful, Maxson is also incredibly selfish and shortsighted, with a penchant for throwing the N-word around as he shares his Friday night bottle with best friend, Jim Bono. There’s trouble brewing in Maxson’s world and change he isn’t ready to accept. Despite his many protestations, and soliloquies delivered to the angel of death, Maxson seems determined to stick to his stubborn, wayward ways. What he’s failed to consider are the consequences in this world.

The talented cast successfully inhabits their characters, the times, and their socioeconomic realities, creating an evocative period piece that resonates with contemporary audiences. Many of the issues Maxson rails against are still present in the U.S., though some progress has been made. However, Maxson’s refusal to explore the benefits or possibility of college recruitment with Cory seems a critical error even to Bono and his wife Rosy. The expertly crafted play contains multiple similarly binding threads, leading to an explosive climax and bittersweet resolution.

The relationship between the three older characters, Maxson, Bono, and the long-suffering Rosy, provides the heart, soul, and much of the heartache of the show. Ron Himes is full of fire and vinegar as the irascible but not unlikeable Maxson. His moods swing wildly and at times foolishly as he refuses to consider those around him, or how his actions may impact them – their relationship and future. He is a man so afraid of losing his tenuous grip that he effectively stifles those around him.

Robert Alan Mitchell is on-point as Maxson’s best friend Bono. He’s loyal and always looking out for Mason’s best interest, even when his friend rejects the advice. Aware of his friend’s indiscretions, Bono cautions him to be careful and take care of what he has. Naturally, their relationship becomes strained as Maxson digs in his heels. Linda Kennedy may be small in stature, but her Rosy is the only one who can really stand up to Maxson. She is flirtatious and fiery, but always demanding respect and focused on what’s best for her son. When she finally puts her foot down, the consequences reverberate for years. The tension is as real as the circumstances and the entire ensemble responds, following the leads and ensuring Lorna Littleway’s vision is realized.

Steven Maurice starts out a bit stiff as Lyons, but as the play unfolds his characterization grows on you revealing a kind, quiet soul with unexpected resiliency. Brian McKinley is bold, brash, and eager to excel as young Cory. A generally obedient and respectful son, he reaches his breaking point with eloquent fire. Lena Sanaa Williams is engaging as the young Raynell. Her character is light and optimistic, signaling the potential for a better life ahead, and Williams fills her role with a sunny, curious disposition. Finally, Richard Agnew shines as Maxson’s brother Gabe. A bit addled and slow after getting injured in the war, Gabe is genuine and slightly underplayed to good effect. His closing lines hit you with raw authenticity, creating a powerful coda to the story that finds bittersweet hope in bitterness and anger.

Unsettling and uncomfortable at times, Fences, running through January 21, is a moving, evocative drama that reminds us of our human foibles and shortcomings while offering a hopeful conclusion. The cast turns in remarkable, memorable performances as August Wilson pulls bittersweet hope from the bitterness and anger over the personal cost of segregation and lingering racism.