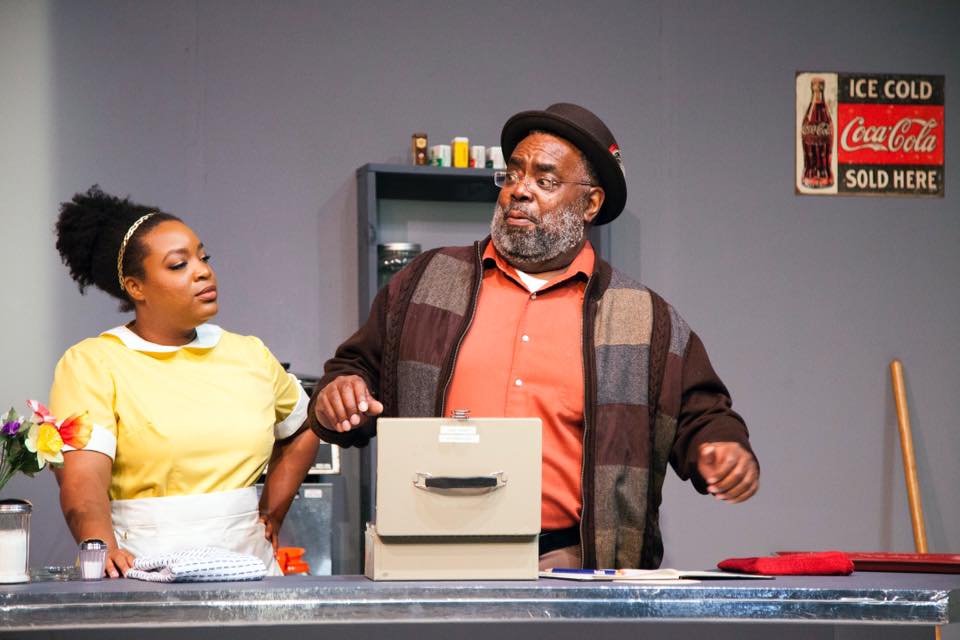 With its effective production of Two Trains Running, Clayton Community Theatre once again demonstrates a commitment to serious scripts and relevant drama. August Wilson's tale of the trials and tribulations of a poor black neighborhood in Pittsburgh is set in 1969, but much of the story feels familiar and current. The capable cast will have you shaking your heads in a knowing way at more than one scene as the show moves crisply and clearly to its satisfying, hopeful resolution.

Memphis Lee owns a small, fading diner in the heart of a depressed Pittsburgh neighborhood that's frequented by a number of local regulars. There's Wolf, a numbers runner using Memphis' pay phone as one of his offices. Holloway, the neighborhood philosopher and historian, has an opinion on everything but just one piece of advice. Hambone, an unsettled man driven to distraction by his demand to be paid a fair price for his labor, forms an uncertain alliance with Sterling, a young, restless man just out of prison and looking for some way to get ahead. Local funeral home director West pops in often, his is the only thriving business in the area. They are all taken care of by Risa, Memphis' lone employee and the one character who is always working, a young woman with troubles of her own.

The diner regulars visit for coffee, beans and cornbread, and the local news. This area of the city is being gentrified and businesses are closing everyday. Memphis has been fighting with the city and the opportunistic West, he demands a fair price for his business and won't sell until he's satisfied. Several of the younger men who stop by are constantly looking for work or money making schemes and the future is looking pretty bleak. But all hope is not lost in Two Trains Running, for Memphis is a man of considerable fortitude and perseverance and he is willing to step through multiple hoops if it will get him a just reward. For a change, this black man won't be cheated by loopholes or a system that feels stacked against his interests. Though he still must leave behind everything he worked for years to establish, he can do so with his head held high.

Archie Coleman is engaging and charismatic as Memphis Lee, his character ever chatty, with a quick temper that flashes hot but is complemented with passions mellowed by time. He is a man of principle willing to stand up for his beliefs. In a time of tumultuous change, he remains constant and committed to his sense of right and wrong. Jazmine K. Wade counters him with quiet consistency as Risa. She is not beyond talking back or sticking up for herself, but she's carefully guarded always skeptical. Risa is a bit of a mystery that's never fully revealed and Wade keeps our interest while providing contextual depth to each storyline.

Eric Lindsey and Minware Tutu are confident and ambitious as Sterling and Wolf, adding depth to characters too easily played as stereotypes. Don McClendon is perceptive with a dry and cutting wit as Holloway, but there's a visibly caring heart behind his jabs. Jeremy Thomas is sympathetic as Hambone, eliciting compassion from Risa and the audience, and displaying humility and virtue beneath his tattered clothing and unkempt hair. Finally, Jaz Tucker is smooth and particular as funeral director West. Paying as much attention to the mood of the room as he does to hygiene, he strolls around with a sly, knowing smile, much like the fox in the henhouse. Together, the actors create a picture of a community that feels at once familiar and real.

Director Nada Vaughn guides the slow moving show through its pace with a sure hand. Tension slowly mounts and at times it seems that all hope is truly lost, that tragedy is about to befall the characters, but the resolution is surprisingly sweet. There were a few unfocused moments but, generally, the show keeps your interest without being over dramatic and with changes grounded in everyday reality. There are no chase scenes and no major conflicts between the characters, just an accumulation of small acts, callous commentary, and everyday kindness that rises together to provide a satisfying tale.

Two Trains Running, in performance through October 22, is a tenderly rendered peek through the looking glass to a not so distant past, and a solid production by Clayton Community Theatre. The show explores economic opportunity, inequality, and racial discord with a reserved approach that feels so authentic it cannot help but underscore the continuing relevance these issues hold.