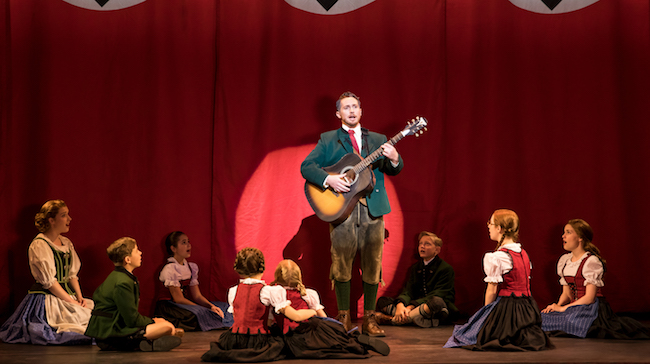 In times of political discord, ‘The Sound of Music’ fills audiences with hope and courage

The Fox Theatre presents Networks Presentations national touring company of Rodgers and Hammerstein’s The Sound of Music in a stirring production that puts emphasis on the characters and their choices, creating a show that feels more intimate and personally motivated. The result is the same buoyant, hopeful musical audiences have come to love, but with darker edges and more tension.

Maria can’t quite fit in with the structured routine and muted conversations of the convent, so the Mother Abbess sends her to serve as governess to the von Trapp family. When she arrives, Maria finds that Captain von Trapp, the children’s widowed father, has duplicated the regiment and discipline of his troops with his offspring. There’s a distinct lack of laughter and song until Maria shakes things up, and the family dynamic plays out against the backdrop of the Nazi occupation of Austria and the Captain’s refusal to support the regime.

Maria, played with joyful exuberance and abundant energy by Jill-Christine Wiley, quickly captivates the audience and the children. Her voice has a clear, crisp tone that’s youthful and light, easily capturing the character’s sense of wonder and reverence. Maria’s joie de vivre is countered by Mike McLean’s serious tone as the Captain, a man who hides his pain and tender heart behind a stern, sometimes stiff exterior. The two actors harmonize well and there are visible hints at the sparks between them, culminating in a dance that puts their obvious affection in full view.

The von Trapp children are delightful, each emphasizing their personality through posture, movement, reactions, and mannerisms. Kelsie Ward is the almost grown up Liesl and she and Chad P. Campbell shine in the flirtatious “Sixteen Going On Seventeen.” The other children, Landon Brimacombe as Friedrich, Maya Karp as Louisa, Arick Brooks as Kurt, Katie Grgecic as Brigitta, Amarylis C. Miller as Marta, and Sophia Massa as Gretel, bring distinction and charm to their roles. Brooks has a lovely, clear falsetto, Grgecic is almost too clever for her own good, and the sometimes shy, sometimes bouncy Massa steals several scenes with appropriate aplomb.

The supporting cast is equally capable, and it is through these secondary characters that we see much of the political and social underpinnings of the show. Melissa McKamie is self-absorbed and scheming as the Captain’s almost fiancé, Elsa Schraeder, but she’s casually complicit and not as cruel as sometimes portrayed.  Jake Mills as Max Detweiler is the ultimate opportunist, willing to point his moral compass in the most profitable direction. Both characters are essentially likeable, which only heightens their inevitable conflict with the resolute Captain.

In contrast, Lauren Kidwell is kind, concerned, and surprisingly relatable as the Mother Abbess. She and Wiley are completely in sync and surprisingly friendly during their duet on “My Favorite Things.” Kidwell and the other nuns, including Webster University grad Melissa Weyn as Sister Sophia, fill the air with gorgeous hymns and both “Maria” and “Climb Every Mountain” soar as a result of their finely tuned harmonies and Kidwell’s reverberating high notes.

Music director Michael Uselmann provides excellent arrangements that suit the actors’ voices. He balances the accompaniment well, ensuring the instruments always complement and never overpower the songs, and entertains with brisk interludes. The set, lights, sound, and costumes are all perfectly attuned to the show and create stunning transitions as they slide in and out of place on the large stage. The elements come together while ensuring the focus is on the songs and story, enhancing the intimate feel of this large production.

The unfurling of the Nazi banners as the von Trapps perform at the closing music festival, the location from which they will make their daring escape, remains visually powerful, briefly silencing the audience. The impact of the moment is alluded to throughout the play, from Rolf and the family butler exchanging sharp salutes, to Elsa and Max trying to convince the Captain to join the Nazis for financial and social benefit, to the terse exchange between the captain and the men sent to induct him into service. These moments have an intensity that effectively underscores the serious ramifications of the choices the von Trapps make. McLean is steadfast in his role, ensuring the Captain stands tall and convincingly holds to his principles.

At its heart, The Sound of Music is about love and the sacrifices we willingly make for love. Maria loves god; but she loves freedom, the children, and caring for others to the point that being a nun isn’t the right choice for her. Captain von Trapp loves his country and home but will not succumb to Nazi control, and he isn’t willing to love someone who doesn’t share his beliefs or resistance. He needs Maria as much as the children, who are desperate for real love and affection from their father. The musical reflects and reinforces these ideas with beautiful melodies that linger and songs that are consistently popular even to those who don’t know the musical.

Strong directorial choices in the national tour of The Sound of Music draw focus to the underlying themes of personal choice and courage, but the love of god, family, and country remains in the forefront. The musical ran for one-weekend only at the Fabulous Fox Theatre in St. Louis. While audiences in attendance were quite appreciative, it’s a shame the run wasn’t longer so others would have the chance to see this more personally pointed and thematically relevant version of the beloved musical.