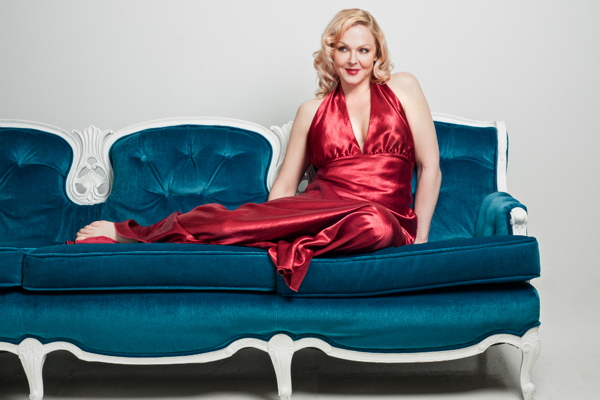 The Blue Strawberry was packed the other night (Wednesday, February 12th) for the return engagement of singer Storm Large. (Yes that's her real name.) I'd missed her previous visits to St. Louis, but I'd heard wonderful things about her and I was keen to see her show.

The Strawberry's web-site offered a couple of clips of her songs, and they gave me the impression that her style was more folk/rock than cabaret; perhaps she'd be more at home in a larger venue (the Pageant?). But from the instant she comes on stage it's clear that Ms. Large can make herself at home anywhere! She is quite amazing!

An attractive youngish woman, she appears in a black jump-suit--simple, but sexy. Her hair is ash-blonde but with a hint of . . . pink? No it's an aura of amethyst that hovers in her hair. She's backed by her band, Le Bonheur--piano, drums, guitar, bass guitar--with whom she shares wonderful quick wit and camaraderie. She herself occasionally plays baritone uke.

As the songs flow out we see the vibrant LIFE in this gal! She opens with a fierce bluesy number about how "This is a man's world". She is so freshly uninhibited! Her banter is awash in words that your maiden aunt might not like, but they are so natural, so honest--as inoffensive as those grandmothers in a rural Irish pub who pepper their chat with "feckin' this", "feckin' that".

She commiserates with heterosexual men in this age where the gender "game" is fraught with sharp-toothed man-traps which threaten prison or cancelling. It's a scary time for men. She herself? I think she doesn't like to be categorized so she prefers to call herself "sexually omnivorous" rather than to embrace that more political label "bi-sexual". She likes women too, she says, "because we're so delicious!" But she so enjoys and so wisely understands the gender game of men and women--with all its joy and its complex troubles--and especially when it's "catch and release". She talks so openly and honestly (and wildly comically) about all this.

Most of the songs in the evening are her own. They cover a wide range from the slow, soft, sweet "A Woman's Heart" to the deadly serious and political wail of "Everybody Knows", in which "the poor stay poor and the rich get richer" while "Old Black Joe is still pickin' cotton". Everything from "Lightning Never Strikes Twice", a dark waltz in a minor key, to the goofy and adorable "My Vagina is Eight Miles Wide". She does a beautiful version of Cole Porter's "It's All Right With Me". She can belt, she can shout, she can charm and seduce you with lush low tones. She can startle with a high note like a trumpet squeal--or even like a flute. She can twist a note into a growl. (She also whistles impressively!)

It's a high-energy show. She moves with astonishing grace. She makes such lavish, gorgeous use of her arms. She clearly loves and enjoys her body. After all, as she says, "it's her billboard".

Two of my favorite songs, though, were quieter ones:

Storm Large utterly owns every song she sings. But beyond the songs the bright jewel at the heart of this evening is the singer herself--a smart, free, honest and deeply insightful woman who is simply more alive than anyone you ever saw. I was reminded of songwriter Fran Landesman who gave an evening of cabaret here some years ago. Like Ms. Landesman, Storm Large writes lyrics showing at once both her deep engagement in life and her sardonic objectivity towards it.

Brought to us by The Presenters Dolan, Storm Large appeared at the new Blue Strawberry on February 12 and 13. For informtion on upcoming shows, visit the Blue Strawberry web site.