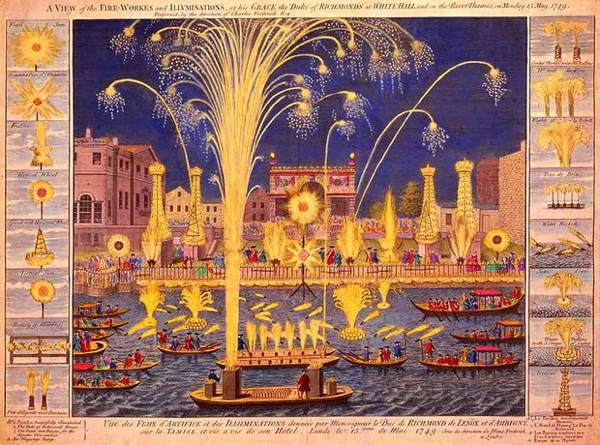 After a couple of weeks of "big band" music from the late 19th and early 20th centuries, the St. Louis Symphony Orchestra downsizes this weekend (December 6-8) as guest conductor Richard Egarr leads the band in a program titled "Baroque Fireworks." Think of it as sherbet after a big meal.

"Baroque Fireworks" is an appropriate name for more reasons than one. To begin with, one of the works you'll hear was actually written to accompany a massive display of the real thing: Handel's "Music for the Royal Fireworks." Commissioned by Britain's King George II in 1749 to celebrate the end of the War of Austrian Succession--a typically pointless series of conflicts that ended with the Treaty of Aix-la-Chappelle the previous year--the music was intended to accompany a massive public fireworks display scheduled for April 27th.

How massive? "A 400-foot wooden pavilion was constructed for the occasion in London's Green Park," writes Kali Blevins at WDAV's "Of Note" blog. "George's Comptroller of his Majesty's Fireworks for War as for Triumph -- I kid you not -- organized a fireworks display involving nearly 10,000 rockets and 101 cannons."

That much firepower required some very loud music, and (as Ms. Blevins notes) Handel was reportedly not happy when he was told that the music should be "heavy on the military instruments (i.e. brass, woodwinds, and percussion), and 'no fiddles.'" Handel would later add strings for the version we'll hear this weekend, but at its premiere the "Royal Fireworks" music was played by a band of 54 wind instruments (trumpets, horns, bassoons, and oboes) plus a battery of kettledrums and side (snare) drums.

That premiere was not a huge success. As described in 2016 program notes for the Utah Symphony, "the royal fireworks turned into a royal fiasco, owing in part to a convergence of bad planning and bad weather."

Display areas were poorly lit, the fireworks were incomplete in their spectacle, and a stage pavilion burned down in the middle of it all. The sense of disaster ruining a moment of triumph was so strong that accounts of the debacle noted 'only two persons were killed' in the ensuing melee.

Not your ideal opening night but maybe a fitting "tribute" to a long, convoluted, and pointless war which, like so many such wars, probably served only to exhaust everyone until they could prepare for the next one.

Handel's music, happily, has proved to be a great success. Running a little under a half hour, it's upbeat and celebratory, filled with what Shakespeare's Othello, in his famous "Farewell to Arms" speech, calls:

the shrill trump,
The spirit-stirring drum, th' ear-piercing fife;
The royal banner, and all quality,
Pride, pomp, and circumstance of glorious war!

It's the aural equivalent of real fireworks, in short, with no danger of a conflagration in Powell Hall.

The other pieces on the program are celebratory as well. Not in the "bombs bursting in air" style, perhaps, but more in the "joy to the world" vein. Which seems appropriate for this time of year.

The concerts will open, in fact, with music written by Handel for a different British monarch and a different celebration: the "Water Music," commissioned by George I for a 1717 party on the River Thames. It was apparently quite a splendid affair, according to a contemporary account in The Daily Courant, Britain's first daily newspaper:

On Wednesday Evening [17 July 1717] at about 8, the King took Water at Whitehall in an open Barge... And went up the River towards Chelsea. Many other... Persons of Quality attended, and so great a Number of Boats, that the whole River in a manner was cover'd; a City Company's Barge was employ'd for the Musick, wherein were 50 Instruments of all sorts, who play'd all the way from Lambeth... the finest Symphonies, compos'd express for this Occasion, by Mr Handel; which his Majesty liked so well, that he caus'd it to be plaid over three times in going and returning.

We have, alas, no idea of exactly what pieces George and his fellow royal pleasure-seekers heard that night. "No definitive score of Handel's Water Music survives and it's impossible to know exactly which movements the King heard, or in which sequence," write Yvonne Frindle and David Garrett in their program notes for this concert.

Although it's now believed the musical numbers were mixed together, the Water Music has long been grouped into three suites based on the featured instruments: the horn suite (in F major), the trumpet suite (in D major), and the flute suite (in G major). For this performance, Richard Egarr has chosen from the trumpet and horn suites and added a part for timpani.

The piece that comes in between the "Water Music" and "Fireworks Music" will likely be less familiar, since the SLSO hasn't played it since 1989. It's the Sonata à 5, HWV 288, for solo violin and two oboes along with strings and harpsichord. Written during Handel's time in Italy (1706-1710) it is, according to Mr. Egarr (as quoted in this weekend's program), "a fantastic and hugely under-exposed masterpiece from the 22-year-old genius, fired by his time spent in that amazing musical playground." And he ought to know, having made a critically praised recording of it, along with Handel's Op. 3 Concerti Grossi, back in 2007. The violin soloist this weekend will be the SLSO's Associate Principal Second Violin, Kristin Ahlstrom.

For the rest of the evening, the focus shifts to Handel's equally famous contemporary J.S. Bach with performances of his Brandenburg Concerto No. 5 and Orchestral Suite No. 3.

Like many of the great composers of their time, Bach often worked for the government. The two works that represent him this weekend were composed when he was the music director and resident composer at the court of Prince Leopold of Anhalt-Cöthen from 1717 to 1723. The prince was fond of what Paul Schiavo described, in program notes for a 2012 performance by the SLSO under Nicholas McGegan, as "lively secular instrumental music," and Bach filled the bill nicely with both the suite and the concerto.

Although the solo instruments in the concerto are ostensibly the violin and oboe (roles filled in these concerts by Angie Smart of the SLSO's First Violin section and Associate Principal Flute Andrea Kaplan), the fifth Brandenburg Concerto includes a large and flashy harpsichord part that would have been played by Bach himself back in the day. That's because Prince Leopold had just obtained a fancy new two-manual harpsichord made in Berlin by Michael Mietke, official provider of keyboard instruments to the royal court, and undoubtedly wanted to show it off. This weekend, Bach's role will be taken by Mr. Egarr, who is an accomplished harpsichordist and often conducts from the keyboard, just as Bach did.

The Orchestral Suite No. 3 was also likely a hit with the prince, being an appealing collection of dances preceded by a short "French overture" (the name referring to the form's origins in the ballets of Jean Baptiste Lully) with its characteristic majestic opening followed by a lively main section. Bach's mastery of counterpoint gives the music a bit of weight, but even so, the terpsichorean roots of this work are as obvious as they are delightful.

Those roots are especially apparent in the last two movements, the lively, foot-stomping "Bourée" and "Gigue." The former was a dance that was especially popular at the court of Louis XIV of France, eventually morphing into a classical ballet step known as the pas de bourèe. Not that I'd recommend trying to do one from your seat in Powell Hall.

The Essentials: Richard Egarr conducts The St. Louis Symphony Orchestra, along with violin soloists Kristin Ahlstrom and Angie Smart and flute soloist Andrea Kaplan in Baroque Fireworks. Performances are Friday and Saturday at 8 pm and Sunday at 3 pm, December 6-8, at Powell Symphony Hall in Grand Center.