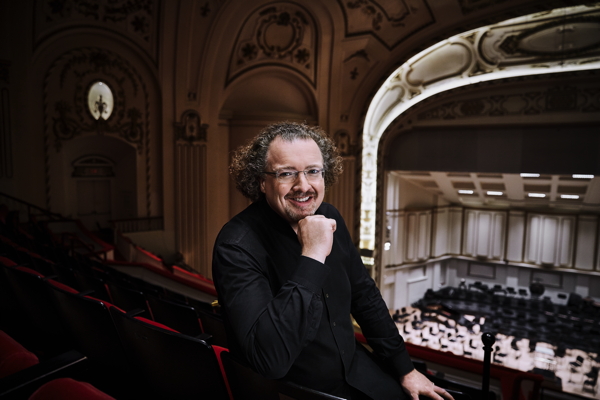 'Genius has no gender': Part 1 of a conversation with Stéphane Denève

The St. Louis Symphony Orchestra (SLSO) may have suspended its current season because of the COVID-19 threat, but the 2020/2021 season is scheduled to go forward as usual. In February, I sat down with SLSO Music Director Stéphane Denève to talk about the new season. Here's part 1 of that conversation, with minor edits for clarity.

CL (Chuck Lavazzi): I was looking through the season press release and the first word that came to my mind was "innovation." The SLSO has certainly been doing innovative and different programming over the years, and like every orchestra, has been doing community outreach and looking to attract a younger audience and an audience that doesn't often come to the concerts. It seems to me that the 20/21 season really hits those targets.

SD (Stéphane Denève): Yes, it's fascinating to make a season in America. It's my second season as music director, and it's such a jigsaw puzzle. There are so many things you have to think about. For me the most important thing is to respect a variety of styles. It's like a bouquet with many types of flowers.
I feel as an artist that I'm not just a museum curator--just respecting the pieces from the past. We are doing live performance art, so I want to give the audience a fresh take. I love communication and I want this season to amplify the communication between the audience and myself. I feel kind of at home now here, so this is something that is the start of a dialog.

CL: I know one of the things a lot of people have been talking about is the prominence in the new season of women composers and music about women. What prompted you to do that?

SD: Well, I noticed that the world of the classical symphony orchestra is changing and I more than welcome it, because more equality was long overdue. And I look at the DNA of this orchestra and notice that the St. Louis Symphony Orchestra is one of the first major orchestras to be composed of more women than men. Also our resident conductor is a woman [Gemma New], our CEO is a woman [Marie-Helene Bernard], our Chorus Master is a woman [Amy Kaiser], and some of our Principal players have been women. So I saw it as a way of celebrating this.

This season is a way of saying that the world is changing, we are making it better, and let's try to elevate voices that need to be elevated while maintaining the highest standards. Thirty years ago when I was first starting out as a professional musician it would have been impossible to program a season like this with so many female composers and conductors, but now it's the new normality. Nobody thinks about how many musicians in the orchestra are female.

CL: It's taken for granted.

SD: Yes, it's taken for granted. And now the next thing is to take for granted equality with composers of today. We won't change the past but we can change the future and shape it, and it's happening.

CL: Speaking of composers of today, I know the last time we talked you described the kind of contemporary music you wanted to present, and the kind of newer works you have been presenting have been very appealing, at least from my point of view. They've had real emotional content.

SD: Thank you. I have to say the feedback so far has been extremely encouraging. Many of the new pieces I have brought this season have had a very warm welcome. People are saying the music is very melodic, very emotional, very involving at first hearing. And that is without compromising at all because it's all music that I'm very passionate about and that I love to conduct.

I hope all the audience is reconnecting to the idea that it's good to discover something new. It may move you to tears like the good old Tchaikovsky 6th. It's a simple idea, but it's just a matter of selecting music that I hope will be shared by many people.

CL: I was also noticing that there are some works in the new season that are not brand new but that aren't often heard. I was happy to see "La tragédie de Salomé" by Florent Schmitt, for example, because you so rarely see any of his work.

SD: It's funny, actually, what makes some composers disappear and reappear. For some composers it's really unfair, and he is one of those--like Zemlinski and Roussel. Honegger is another of those who was very famous before the Second World War and then became less played--I don't know why.

But with the Florent Schmitt, I'm very pleased because not only is it a great, exciting symphonic poem but on top of that it's very important. Because without it, there would be no "Rite of Spring." "La tragédie de Salomé" was dedicated to Stravinsky and was really an inspiration for him. I wouldn't say he copied it, because it was just in the air and Stravinsky loved that piece.

We will also play "La peri" by Dukas--the full ballet, not just the fanfare.

CL: Yes, it's a lovely piece and I'm really looking forward to hearing it and other things in the late 19th/early 20th century French repertoire. I was listening to Chausson's B-flat major symphony on the way over here and thinking it would fun to hear that live.

CL: Yes, the "Symphony on a French Mountain Air!"

SD: Yes, Jean-Yves Thibaudet said he wanted to play that with me someday.

CL: Something for the future then, I guess. I was also glad to see one of my favorite Dvorak symphonies on the schedule, the Eighth.

SD: Yes, coupled with the Symphony No. 3 by Florence Price. When he visited the USA, Dvorak said the music of America should be based on the Negro spirituals and therefore jazz, which you hear in her symphony. She has really a special voice of her own, and I wanted to couple it with Dvorak. We couldn't do the Ninth because we just did it recently.

CL: I was kind of disappointed that there was no Clara Wieck on the program.

SD: Yes, but we have Fanny Mendelssohn and there are so many others. Who knows what Alma Mahler might have written if her husband hadn't forbidden her to compose? We do have the proof now that it was because the music world was so dominated by men that didn't allow women to express themselves. Now you see female composers on an equal footing with men. And I think it's a very good thing that we see that genius has no gender.

Next: "Stéphane's Seats," the "Crafted Series," and other ways to be festive.