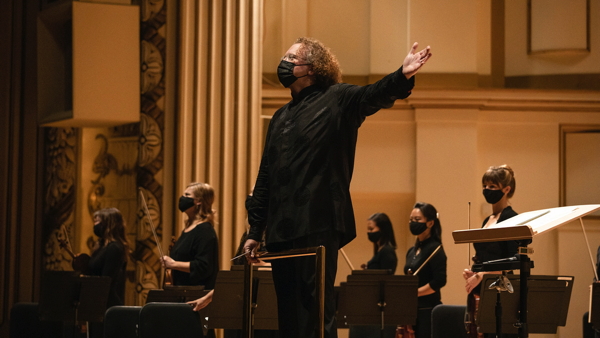 Review: the SLSO gives voice to the unspoken

Two contemporary Estonian composers highlighted the return of live classical performances at Powell Hall on March 26-28. As commentator Tim Munro noted in his beautifully tailored program notes, Estonia is about one-quarter the size of Missouri--and sadly, we must ask ourselves how many Missourians are familiar with Estonia or if it was ever mentioned in their education. But the power of serious music of any genre springs from its ability to bridge the chasms of geography and cultural divides. This program knit our world just a bit closer.

Ester Magi, who will celebrate her 100th birthday in 2022, was inspired to compose her 1990 work "Vesper" after imagining evening prayers uttered not by a choir of voices and words, but by a choir of stringed instruments. In so doing, the vast range of the string family produces a canvas for each listener to overlay his/her individual spirituality. Given that we are in the season of Easter, Passover and the approaching Buddhist Vesak festival, such an opportunity proves itself particularly meaningful. Although at first hearing Magi's lyrical flow could perhaps be said to lack definition, seemingly adrift in a sea of sound, one could also argue that it is fitting for hymns without words to allow the soul of the listener to wander at will.

A bit differently from Ester Magi, Arvo Part's "Cantus in memoriam Benjamin Britten" (Song in Memory) focused narrowly on the reflection of the loss of a great composer. Yet like Magi, opting to leave words behind, Part's score is highly charged, bold and dramatic, much like Britten's music, yet stamped with its own uniqueness. Conductor Stéphane Denève delivered faithfully the deep emotion infused in Part's writing, bringing to life the stark and angular downward movement of a melody that challenges the soul. Special commendation goes to percussionist Alan Stewart, the only non-string player on the program, who provided the clanging chimes called for by the score, and whose instrument requires far more skill than many of us realize.

Boldness--and tenderness--also marked the concluding work on the program, the "Chamber Symphony in C minor" by Dmitri Shostakovich, orchestrated by his friend Rudolph Barshai from his String Quartet No. 8. After years of struggle trying to comprehend the tragedies of war and the less-than-promised results of revolution, as well as setbacks in his personal life, Shostakovich intended this work as perhaps his own epitaph, deriving its overarching melody from the letters DSCH of his own name. But it is important to remember that the the composer's primary dedication was to "victims of fascism and the war." Although the work was written in Dresden, the scene of intense Allied bombing during World War II, ironically the second movement draws from a Jewish folk song, underscoring the universality of the dedication. Again, Stéphane Denève skillfully delineated the carefully drawn melodic lines and intense emotion that clutch this work. The powerful articulations of the strings in both the rapid and slower sections belie the fact that no percussion is used.

The program opened with one of the masterworks, Johann Sebastian Bach's "Concerto for Two Violins in D minor," which featured the SLSO's own Kristin Ahlstrom and newly-appointed Assistant Conductor Stephanie Childress as duo violin partners. This is an energetic work that needs to spring forth with a life of its own. Interestingly, the slower second movement seemed to capture the vibrancy of the work best, with a tempo that seemed just right. This is only a suggestion, but given the serious nature of the program, a bit more brightness in the outer movements might have added a nice contrast. In any case, the talent to mold the interpretation, in any direction, was certainly present.

In today's brave new world, education cannot be entrusted solely to educators, but is the responsibility of all of us. Music Director Stéphane Denève seems sincerely dedicated to providing background and insight for listeners from all backgrounds, providing both oral and written information for listeners of all backgrounds. In his introductory notes, he even addressed the issue of why we are sometimes drawn to sad music for its purgative effects. Education provides the backbone of music appreciation, and we should be grateful that the Saint Louis Symphony holds that commitment.

Information on upcoming concerts, both digital broadcasts and live events at Powell Hall, is available at the St. Louis Symphony Orchestra web site.