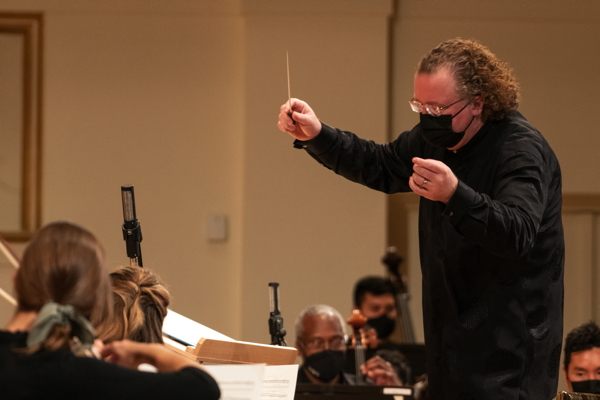 The sublimity of nature and the glory of the animal kingdom combined to create a haunting and mesmerizing program at Powell Hall April 1-3, as the St. Louis Symphony continued its return to live in-person performances. In works by Aaron Copland, Arthur Honegger and Charles Camille Saint-Saëns, the sounds of singing birds, coursing water, braying donkeys, dancing elephants and rattling bones of dinosaurs soared through Powell Hall. But we also got to hear the sounds of the sun rising in silence on a summer morning and the elegance of a swan lost in contemplation.

Martha Graham asked Aaron Copland in 1942 to create music for a ballet set in Appalachian country. Two years later Copland presented the world with perhaps his most endearing work, "Appalachian Spring." But was the music an ode to springtime in Appalachia, or to a bubbling spring, or both? In any case, the music itself springs into the soul. In 1970 Copland arranged his original suite for a pared-down orchestra of 13 players, which was the version heard at these concerts.

Anyone who has heard a small opera orchestra knows that managing a smaller ensemble can sometimes pose even greater challenges than a full symphony; the tiniest discrepancy between a couple of instruments can be much more easily heard. Yet Music Director Stéphane Denève wove the thirteen voices together effortlessly, producing a warm and resonant sound. Although the strings formed the rich backbone of Copland's impressionistic score, it was the woodwinds--flutist Jennifer Nitchman, clarinetist Scott Andrew and bassoonist Andrew Cumeo--who breathed life into the music. Their skill made their instruments sound like living creatures inhabiting a rustling forest beneath a tranquil sun. Pianist Peter Henderson provided both rhythmic delineation as well as melodic emphasis, demonstrating why the piano is such an expressive musical instrument.

Arthur Honegger's "Pastorale d'été" (Summer Pastorale), written for a larger ensemble, featured one more wind instrument, the French horn, portraying the languor of a warm summer morning. Roger Kaza performed with a beautiful smoothness and warm tone that did indeed evoke the golden warmth of the sun. Honegger drew inspiration from the French poet Arthur Rimbaud, whose poetry is unrivaled for its sensuality and haunting images. Ironically, when the work was premiered in 1921 in Paris, the conductor was none other than Vladimir Golschmann, who would later emerge as a legendary conductor of the St. Louis Symphony.

The program concluded with a complete change of pace, "Le Carnaval des animaux" (Carnival of the Animals), one of Saint-Saëns' most engaging works, both a celebration of the animal kingdom and a celebration of the orchestra. Pianists Alessio Bax and Lucille Chung took center stage as piano soloists--as a phenomenal pianist himself, Saint-Saens wryly included "The Pianists" as part and parcel of the parade of animals. A kingly lion, donkeys, fish, elephants and bony fossils also formed part of Saint-Saens’ grand tribute to the wonders of the living creatures who share our world with us.

Bax and Chung made a magnificent duo, working together almost as one four-handed performer.  The two were evenly balanced, both with each other and with the orchestra, and seemed to know the score intimately. They added a vitality and energy to the performance that is particularly needed at this moment in world history. Principal cellist Daniel Lee gave an exquisite performance of "The Swan," ably supported by the piano duo. His control of the bow and solid strength are a joy to watch as well as hear.

One of the great strengths and joys of Music Director Stéphane Denève is his commitment both to the masterworks and to contemporary works, but he has already demonstrated within a short time a solid resolve to program only works of quality. That does not mean disallowing innovative and even avant-garde works, but it means that newer works and premieres must demonstrate intrinsic worth and originality. Denève seems to understand that a symphony orchestra in today’s world must educate listeners of all ages, and will need to prepare and stretch their musical boundaries. To have a conductor with such a commitment in our midst is a great boon to our entire city and region and will surely result in increased community support.

Information on upcoming concerts, both digital broadcasts and live events at Powell Hall, is available at the St. Louis Symphony Orchestra web site.