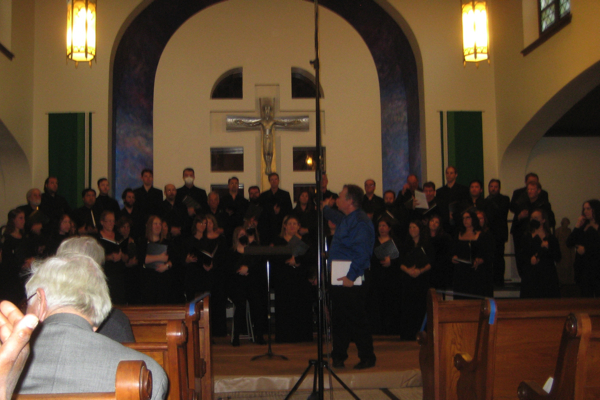 This past Sunday (November 13, 2022), for its second concert of this season, the Saint Louis Chamber Chorus and its artistic director, Philip Barnes, gave its first-ever public concert at the chapel of Ursuline Academy, although the SLCC is no stranger to the venue, as the group regularly rehearses there. The theme of this concert was “Water to Wine”, with an obvious Biblical subtext of Jesus’ transformation of water into wine at the wedding at Cana, as told in John 2, although not all the musical selections were on the sacred side. Mr. Barnes slightly adjusted his regular audience welcome by delivering his remarks before any of the music began, rather than after the first selection, with a particular admonishment to silence all cell phones, because of the modest size of the space. No phones went off to my hearing during the performance, so his request worked.

The thread through this program was the Renaissance-era composer Orlandus Lassus, with his motet “Vinum Bonum” and his full mass setting based on that motet, the “Missa Vinum Bonum”, each receiving its first SLCC performance at this concert. The motet served as the ‘overture’, with Its text juxtaposing very secular sentiments in praise of “A wine good” alongside the evocation of the John 2 tale. The SLCC delivered “Vinum Bonum” at full throttle, with Mr. Barnes invoking the more contemporary rock music metaphor of a “wall of sound”. It certainly hit harder in the relatively intimate space of the Ursuline Academy chapel, a much smaller space compared to, for example, the St. Louis Abbey, the venue of the SLCC’s opening concert.

The second ‘set’ inhabited more secular regions, with three works on the theme of water. Two folk songs featured here, “O Waly, Waly” (a.k.a. “The Water So Wide”), in an arrangement by Timothy Salter (born in 1942, so 80 years young this year), and “The Water of Tyne”, in an arrangement by William Gillies Whittaker (1874-1944). The third selection hailed from the 20th century, Samuel Barber’s setting of a text by Louis Bogan, “To Be Sung on the Water”. This set made for a nice, more restrained contrast to the opener. This reviewer heard some slight deviations in the opening stanza of “O Waly, Waly” to the printed program text, but as multiple versions of the text exist, no harm done.

The program presented the Lassus “Missa Vivum Bonum” with its six sections not as a single unity, but instead interspersed with other works through the concert. The ‘Kyrie’ and the ‘Gloria’ featured in the concert’s first half. The work set the standard text of the Mass Ordinary, without particular references to wine (or indeed water), but rather used the music of the “Vivum Bonum” motet as the melodic inspiration. The ‘Kyrie’ resumed the “wall of sound” feel, as proved to be the case generally for each of the movements (with one exception).

The subsequent set returned to more secular and light-hearted realms, with four selections with wine at their center. Here, Mr. Barnes ceded the podium to the SLCC’s two assistant conductors. First up was Orin Johnson, for ‘God’s Bottles’ by the American composer Randall Thompson (1899-1984), a selection from his longer work “Americana”, and set for female choir. Its text derives from – get ready – a Prohibition-era temperance tract by the National Women’s Christian Temperance Union. (To quote Anna Russell, “I’m not making this up, you know”.) ‘God’s Bottles’ was by far the funniest selection of the afternoon, as communicated in the music’s staccato nature rather than the words themselves. The audience showed its understanding by its laughter afterwards.

For the remainder of this set, Caroline Ibnadeljalil conducted three British works, “The Red Wine Flows” by Robert Lucas Pearsall (1795-1856), “Down Among The Dead Men” by Ralph Vaughan Williams, and “Which Is The Properest Day To Drink?” by Thomas Arne. Balancing the Thompson, the Pearsall and the Vaughan Williams works featured just the SLCC’s men. The Pearsall also received its first SLCC performance at this concert. The opening lines of the Vaughan Williams proved appropriate now by happenstance, on various levels of current world matters: “Here’s a health to the King and a lasting peace / To faction an end, to wealth increase”. The Arne returned the choir to full strength for this celebration of the joys of libation. (No prize for guessing the title’s answer.) Ms. Ibnadeljalil’s conducting style was notably much more restrained compared to Mr. Barnes and to Mr. Johnson. All three conductors achieved successful results, each in his/her own way.

Mr. Barnes returned to the rostrum to close the first half of the concert with the ‘Gloria’ from the Lassus “Missa”, which again returned to the relatively full-on sound of the “Kyrie” and the opening motet. The program notes mentioned the antiphonal layout of the movement, although the choir was on stage on a single set of risers, with choir one house left/stage right and choir two house right/stage left. A technical glitch unintentionally provided the afternoon’s other comic moment when the microphone gave out during Mr. Barnes’ spoken introduction, at which he simply dived into the work.

After intermission, the ‘Credo’ from the Lassus “Missa” began the second half of the concert. The ‘Credo’ features the most extended text of the work, befitting its status as “the central movement of the Mass”, to quote Mr. Barnes’ notes. The ‘Crucifixus’ sub-section provided some contrast to the ‘wall of sound’ ethos. Before the music, however, Mr. Barnes gave a heartfelt paean to live music-making and its need for live audiences, especially in light of the COVID-19 pandemic and its impact on live concerts and several musicians in the choir, and audience willingness to venture out again.

The next ‘set’ revisited the realm of wine, with a pair of works performed ‘attacca’ (essentially without pause). First was the “Trinklied” by Felix Mendelssohn, a setting for male choir of a selection from Goethe’s “West-östlicher Divan” (“West-East Divan”), itself inspired by the Persian poet Hafez (or “Hafiz”). Upping the boisterousness factor was E.J. Moeran’s “Good Wine”, from his “Songs for Springtime”, sung very heartily by the full choir.

The next ‘set’ featured the ‘Sanctus’ and ‘Benedictus’ movement of the Lassus “Missa” as bookends for the program’s other ‘novelty’, “I Am The True Vine” by Margaret Vardell Sandresky (born 1921), a setting of text from John 15, and a fitting metaphorical fit for this concert’s theme. Mr. Barnes acknowledged that Margaret Sandresky was a new name to him, as was the case with this reviewer. Ms. Sandresky’s setting is very much on the mellifluous side, and an effective interlude between the Lassus movements. It would be interesting to learn more about Ms. Sandresky’s music, if for no other reason than she appears to fit an extraordinarily select niche, of active centenarian composers.

The penultimate work on the official program brought the return of a past SLCC co-commission, “Aequam Memento”, by the British composer David Matthews (born 1943), premiered by the SLCC in April 2004. Matthews set the ‘Ode’ by Horace from Book II, Poem 3, which begins with the line ‘Aequam memento rebus in arduis servare mentem’ (‘Remember in difficult times to keep a clear head’). The text encompasses a call to enjoy life, including wine, while it lasts, while also ultimately saying ‘memento mori’. Matthews hews to a fundamentally tonal language here, albeit a somewhat densely chromatic tonality in this work, at least. At least to this listener, the tonal realm seemed overly consistent, in that the musical mood did not shift noticeably between the work’s “enjoy life” and “life comes with an expiration date” sections.

The final movement of the “Missa Vinum Bonum”, the ‘Agnus Dei’, was the exception to the ‘wall of sound’ sense of Lassus’ work, with a modest tamping down of the volume in places. In that light, it made sense to perform the movements of Lassus’ “Missa” separately, with suitable contrasting works in between. But in hindsight, at the risk of sounding like a minor quibble, a more spacious venue might have allowed the Lassus to bloom more. To continue with oenophile metaphors: with its fairly short sonic cutoff, the Ursuline Academy’s acoustic sounded the equivalent of a crisp, dry white wine. (Admittedly, another 40-50 audience patrons might have assisted. The audience numbers filled the main pews quite well, but the side pews had a fair bit of open real estate.)

Speaking of imbibing, the encore returned to more secular realms, a warm arrangement by past SLCC singer Jon Garrett of the traditional song “Drink to me only with thine eyes”. After the concert’s end, a regular concertgoer of the SLCC, and of many other classical music events in the region, remarked: “That was good. Always is”.