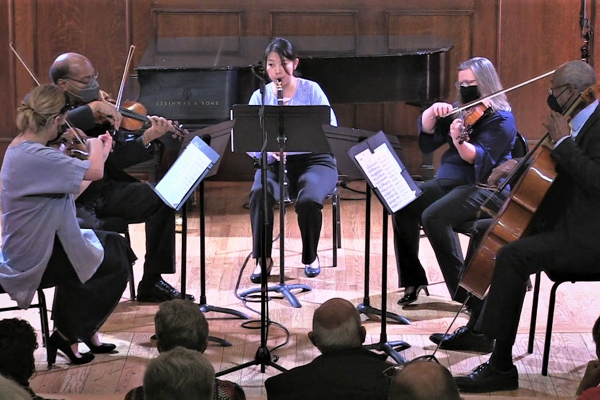 One of the many beauties of chamber music is that as we find ourselves fragmented and isolated in today's world, music performed on acoustic instruments and in small intimate groups seems to acquire an even deeper significance for us, and the growth of chamber music organizations and ensembles in the US and around the world gives testimony to this. Listeners young and old find themselves fascinated with the concept of humans bringing music to life through instruments built by human hands. Emanating from both hands and lungs, wind instruments are particularly infused with the vibrancy and spontaneity of live performance. The Chamber Music Society of St. Louis capitalized on that energy with its most recent concert, themed "The Winds Blow Back," on November 7th, 2022.

It would be difficult to imagine a more active and energetic group than the Society, which has enlarged the musical life of St. Louis since its founding in 2008. Executive and Artistic Director Marc Gordon, ably assisted by a hard-working board and a constellation of accomplished professional artists, has labored to produce programs that are not only stimulating to the ears, but also to the mind. Perhaps one of the greatest contributions of CMSSTL--and one that should never be underestimated--is its commitment to education as an arm of its community outreach. The decline of our educational system makes it imperative that all of us as citizens do our part. Education does not take place only in schools; it should be part of the fabric of our very lives. Each organization that contributes to this process should be lauded.

Renowned conductor Leonard Slatkin partnered with a diverse group of wind artists--rounded out at times with violin, cello, string bass and percussion--in a remarkably varied program consisting of three works. In keeping with the Society's commitment to education, Slatkin introduced each work and gave just the right amount of commentary on the history and significance of each. Opening with two works from the late 1800s, the program began with the "Petite Symphonie" of Charles Gounod, a Romantic work tinged with a bit of Classical elegance. The "Serenade," Op. 44 of Antonin Dvorak, dated slightly earlier than Gounod's work, expresses the freedom and playfulness of folk music, yet is nevertheless imbued with the innate spark of emotion that inhabits all of Dvorak's music. Following the intermission, the program concluded with a rousing rendition of Igor Stravinsky's "The Soldier's Tale Suite," from "L'histoire du soldat," premiered in 1918.

Although all three works were written within a span of about 40 years, it was remarkable to note the evolution that had taken place by the time of Stravinsky. Elements of jazz and ragtime flavor the Suite, combined with pounding and ever-changing rhythms (Slatkin noted that this work was universally feared by conducting students at Juilliard), yet like the Dvorak "Serenade," folk songs and dances also echo through the twists and turns of the music.

Each of the assembled performers on this program is a star in his/her own right. The Stravinsky Suite alone provided ample evidence of that; mathematical prowess is required for the rocketing rhythms that shoot from the score as surely as finger and breathing prowess are required for their performance. Although the auditorium at the 560 Music Center is spacious, each performer projected beautifully and lyrically. Moreover, each instrument could be heard uniquely. Part of the beauty of wind instruments is their diversity--flute, clarinet, oboe, bassoon, trumpet, horn, tuba and all the rest each adding its own color and shading--and thankfully their radiancy was never lost in the hall. Interestingly, only the Gounod Symphonie included the flute, but nevertheless Jennifer Nitchman ably displayed her skills on the instrument. It is always a treat to hear double wind instruments played well, and oboists Philip Ross and Xiomara Mass, with bassoonists Henry Skolnick and Peg Bumb provided shining examples. Percussionist Tom Stubbs demonstrated that talented drummers are also keenly aware of phrasing and melody as surely as wind and string players.

The Dvorak Serenade added a cello to the score, interpreted with warmth and strength by Davin Rubicz, and the Stravinsky Suite included violin, cello, string bass and percussion. Bassist David DeRiso performed with a round and resonant tone that we always love (but don't always receive) from the instrument, and violinist Hannah Ji performed brilliantly as a soloist in the score. Roger Kaza, Tricia Jostlein and Victoria Knudtson performed with liquid and fluent skill on French horn, as did trombonist Jonathan Reycraft, and clarinetists Jane Carl and Tzuying Huang played with an unwavering singing tone. Trumpeter Tom Drake similarly played with skill, rapidity and solid intonation.

One of Leonard Slatkin's great gifts as a conductor lies in his ability to seemingly merge and be at one with the performers. He is able to play an ensemble as his own instrument. Of course all great conductors strive to achieve this, but with Slatkin it is a hallmark and always present. Although the works on this program were scored for smaller ensembles, they still presented formidable challenges to conductor and performers alike. Those challenges were well met and conquered by all.

As the Chamber Music Society of St. Louis continues to expand its audience, its repertoire, its outreach and its sponsorship of talented artists, we are all the richer. Under Marc Gordon's guidance and direction, it is clear that the organization holds an unwavering commitment to community involvement and to maintaining its ideals.