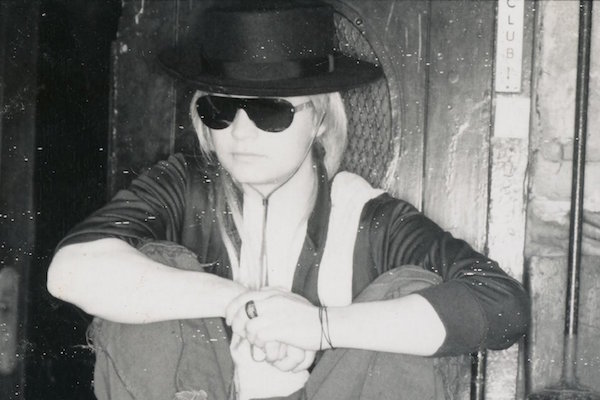 Writer and director Jeff Feuerzeig's film Author: The JT LeRoy Story chronicles one of the more elaborate and bizarre literary deceptions of the twenty-first century. The facts are well known, if convoluted. Laura Albert invented West Virginian JT (Jeremiah Terminator) LeRoy and published Sarah, a popular novel about his dysfunctional life, under this pseudonym.

When pressured to produce JT, Laura imposed on her partner Geoff's half-sister Savannah to impersonate JT and, further, concocted a persona for herself as Speedie, JT's British manager. Many more layers of lying and duplicity attend to Laura's and JT's ingratiating "himself" with publishers and prominent film and television directors. And then, beginning in 2005, The New York Times discovered and revealed the truth.

The anchor throughout the chronologically organized narration is Laura Albert, alone on camera as she relates details of her deceit and encounters. Enlivening the fast edited presentation are animated sequences, numerous shots of audiotape interviews with captions on screen to clarify, home movie and archival footage of celebrities, and a few interviews. But as happens too often when the director is also the writer, Author: The JT LeRoy Story runs too long, at least by 15 to 25 minutes. The middle section, in particular, becomes repetitive, focused on a who's who of rock stars and other celebrities who befriended Laura and fell for the hoax. Because we don't hear their newly informed perspective, only those blinded by fame will care much about the litany of those duped, including Bono, Courtney Love, Madonna, David Milch, Asia Argento and Gus Van Sant.

What would most have benefited the documentary is an analytical voice -- beyond that briefly provided in the last segment -- addressing Laura's psychological and physical tragedies, those events early in her life that prompted her inventions and behavior. Coming very late in the film, it feels almost tangential to the story rather than, as it is, the critical key to Laura. Relying primarily on Laura's description of numerous intricate details often made me feel I'd entered a maze of imaginative but torturous design. Moreover, I repeatedly wondered how much of what Laura related today was fabricated. Without a critical, objective voice guiding the exploration, this is left as an open question. Author: The JT LeRoy Story offers a fascinating but perplexing experience. At Landmark's Tivoli Theatre.