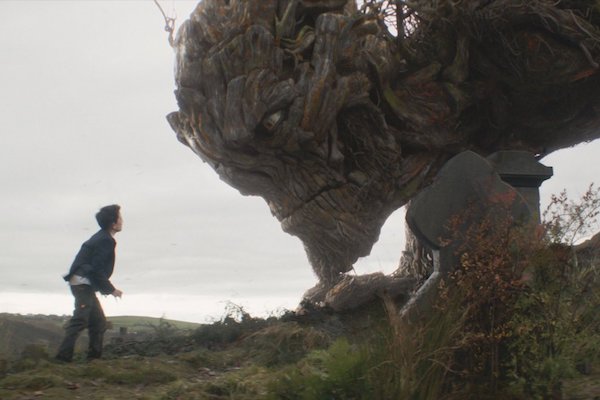 The word "monster" alone might keep you from this film, that and the trailer of a walking, talking tree, bearing down on a small boy. Also, the plot involves a dying mother. Don't let any of these things keep you away. A Monster Calls transcends its title and delivers its promises.

Conor O'Malley is bullied and pitied at school. He's small. His luminous mother is dying. His grandmother is unwarm, acknowledging that the only thing she has in common with that small boy is his mum, her daughter. One of the things that mother and son have in common is art: they both draw.

Wise beyond his 12 years, Conor creates drawings to deal with his anger at his mother's approaching death. His drawings of scary creatures and adversarials line his walls. And, then, after a close-up on Conor's pencil, its sounds captured audibly, the vinous tree appears to Conor at 12:07 a.m. The Monster promises to visit on three successive nights with three stories, after which the boy must tell the fourth story. He must tell the truth.

A Monster Calls is based on the children's novel and script by Patrick Ness. Under the amazing direction of J.A. Bayona, the Spanish director of The Impossible, Jim Kay illustrated the monster with the sense of the man Conor will become. Liam Neeson voices the Monster as part papa and part terror. Bayona married animation to live action, juxtaposing fantasy and reality, and creating red skies right out of Brigadoon and Kagemusha.

Felicity Jones carries the press of the sick mother beautifully, sadly. Sigourney Weaver bears the weight of Grandma. But the movie -- only his second --belongs to delicate Lewis MacDougall. A Monster Calls is nothing -- and everything -- you would imagine.