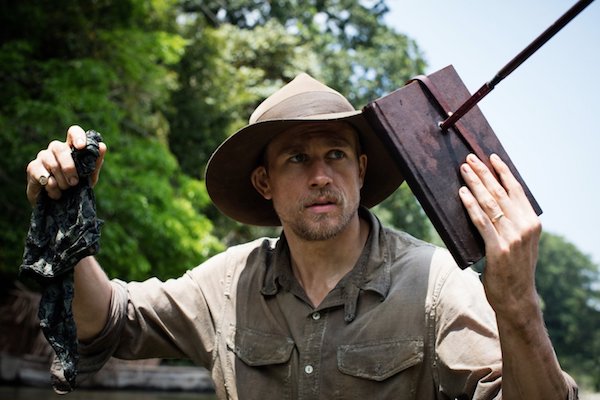 British Major, and eventually Lieutenant Colonel, Percy Fawcett became famous for his exploration of the Amazon in the early decades of the twentieth century. He undertook his first expedition in 1906 for the prestigious Royal Geographical Society to prove his mettle and to redeem his family name after his alcoholic father gambled their honor away.

Fawcett became enamored of, even obsessed with, the Amazon, returning for six more expeditions before he disappeared there in 1925, along with older son Jack. Based on a manuscript he read, Fawcett argued for a lost, well-developed city he dubbed Z, or Zed as the Brits pronounce it. Director James Gray's biopic The Lost City of Z does a serious disservice to Fawcett's varied, trying experiences, making a fascinating story sluggish, erroneous, and dull.

The representation qualifies as its Disneyfication; that is, Gray makes it much quieter, with fewer insects and birds, and with "Hollywood" dangers such as a ridiculous black panther that merely hisses. In addition, these men move so easily through the dense jungle. See Werner Herzog's Aguirre, the Wrath of God for a correction. Gray also gets the compass return wrong and takes great liberties with Henry Costin, Fawcett's companion after WWI, not before. These and other errors (finding the upriver source as they go downstream, corn grown in neat rows) go well beyond poetic license to betray what such explorers encountered and endured.

Music intrudes, clashing with the mood of scenes. The actors mumble or are so badly miked that it's repeatedly difficult to understand them, or to see them in cinematographer Darius Khondji's overly dark compositions. The many stylistic annoyances would be more forgivable if screenplay writer Gray got the story right or if Charlie Hunnam as Fawcett brought anything approaching charismatic, fanatical passion to the role. The same applies to Robert Pattinson as Costin, who looks like he wishes he were in another movie. As Fawcett's wife Nina, Sienna Miller has the best presence in a thankless role, as usual for the wives left behind.

Redeeming moments occur only during abbreviated debates over the male/female double standard, explorer James Murray's lies, and Geographical Society debates over what Fawcett calls narrow-minded convictions, regarding Amazonians as primitives. But overall The Lost City of Z is an inane rendering of a much more complex story. At Landmark's Plaza Frontenac and Tivoli Cinemas.

Addendum: I don't usually interject my travel experiences, but in this instance, I must since I've been to the Amazon twice. I'm not an expert but do know the environment as it is experienced, and for this reason I found The Lost City of Z laughable when I wasn't groaning. I've also lived three times in England, taught there a year and a half and worked in London. I have an easy time with British accents from almost every area, so the dialogue difficulty is not because of problems with the accent. Technically, this is a badly executed film and very disappointing as an explorer biopic.