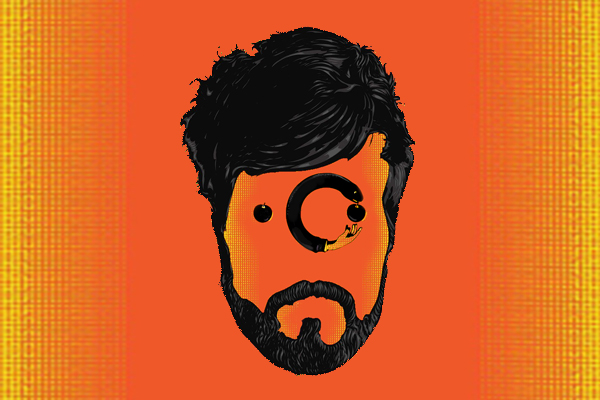 In advance of Whoa Thunder's upcoming release of the flexi-single "Hop To It," Melinda Cooper (of Town Cars and The Union Electric) sat down for a chat with Brian McClelland and Mic Boshans about the new line-up, weird pop, and ego-cooling collaboration.

Mic: So Whoa Thunder is Mic Boshans on drums. Joe Taylor on keys and back-up vocals and samples. Syrhea Conaway on bass and vocals. Dan Meehan plays guitar. Brian plays guitar and sings and writes songs. We all work collaboratively.

MC: How does that feel?

Brian: It feels great -- I've never had that. This band's gone through two full line-ups. It started out with me and two girls that didn't know how to play yet, they were my friends at the time but I was trying to teach them to play instruments so it was like two non-musicians and me. My first experience was as a solo act. But this lineup, everyone's their own front-guy. They're all big names in the scene and I just lucked into this lineup. It's all people we were hanging out with anyway and we're all good friends. So it's an ideal situation with ideal musicians.

MC: It makes a big difference.

Brian: It's a huge difference, it finally became a band at that point. As soon as we got this lineup, I debuted the band. I made a record on my own but this is a whole new thing.

Mic: It's a really fun group of people to work with. Everybody has a sense of humor -- we all take our crap seriously but nobody takes themselves too seriously. It's a lot of fun making music with this crew.

Brian: And we travel well.

Mic: Yeah, yeah. Touring is a lot of fun. We haven't been out long enough to get on each others nerves yet.

Brian: Give us a week...call our booker tell 'em we're ready.

MC: Are you recording right now or do you have anything in the can?

Brian: We have a single we're going to release at the Dressy Bessy show. It's our first recording together and it's called "Hop To It." It's a flexi vinyl single -- we have it back and it's ready to go and we're ready to give it to the radio station, but we've been trying to figure out how to release it. We didn't want to steal and thunder from Andy on his Dutch Courage release. It would be kind of a dick move, right?

Mic: Did both of you just make a Whoa Thunder joke?

Brian: Well, you know what I mean. You don't want to try to throw yours on there as well.

MC: Yeah, that'd be kind of a dick move.

Brian: So we've got a single we're super excited about. We've got to put together a video now cause I do videos too. But the hardest thing to do is make a video of your own band. It really is. I can't. I'm just so blocked about it. I really want to make something great. But man, I can make videos for everybody else all day long. Just like with Middle Class Fashion; I was in that band so long and it took so long to put videos together that we only made I guess three videos in the five years I was in that band. Getting back, we have this recording we're super proud of.

Mic: I love the way it turned out. When we got the flexi test press in the mail, I was surprised by how good it sounded. It sounds as good as a record. And I'm really happy with the recording -- Matt Meyer really worked out.

Brian: Matt Meyer, yeah, he produced and recorded it for us.

Mic: It has a really different sound than the previous Whoa Thunder record because it's a full band and we put the song together collaboratively -- everybody has a voice on it. You can hear all the super voices of the band. It jives very well.

Brian: You really can, especially Joe's stuff in the instrumental bridge. There was just a slight shuffle that kind-of went along with the rest of the song, but as we started to learn it, Joe just turned it into a barroom-piano, old-fashioned barrelhouse vibe. I think it turns on a dime there and adds a whole different flavor that's distinctly Joe Taylor. And then with Mic's mad scientist vibe, yeah, the keys and the drums are %110.

Mic: I'm really happy with the drum sounds. I feel like this recording has a lot more heft to it than the previous Whoa Thunder recordings.

Brian: Well, previous Whoa Thunder recordings all started out as midi drums that I was programming. I was in love with the beats from Tegan and Sara's "So Jealous" record which almost every song is all the same beat over and over again and I love that energy -- it's propulsive that's why every song on the first Whoa Thunder is like that beat. But "Hope To It" is actually built around a beat that Mic started playing.

Mic: I forgot about that.

Mic: It's got a nice groove to it.

MC: So I've done basically what you're doing now going from recording all by myself, and I love the air that you get in the songs when you have other people adding into them and you can actually just sit back and see what happens.

MC: Do you have a problem letting go a little bit, saying "Ok, I wrote it like this but you take it and do what your going to do."

Brian: Not really with that first album, You're Under Attack, my "record record." But at this point I'm trying not to demo demo. When I would make a demo I would make a whole arrangement with all the instruments and all the harmonies. Then I would get attached to the demo so when I would give that to the band, what came back would never quite match up with what I really wanted. So I'm not trying to have a vision vision. I'm trying to create the song...

Brian: Yeah, I'm basically just learning how to learn how to play the entire song by myself with my guitar. Instead of even recording it on my software, I take my phone and make a video of me recording it -- just vocal and guitar -- and that's what I give the guys now.

Mic: That way it's still melody-centric and the song's still there, but we can do what we do.

Brian: I like the idea of being able to play these songs all by myself too if I needed to. I want to make sure that they're strong enough to hold up on their own with out having all the bells and whistles.

Mic: That's a good test of if a pop song's worthwhile, if it stands up on its own without all the sonic over-production behind it.

Brian: Sure, especially power-poppy type stuff, but this is a long way from power-pop.

Mic: We're getting a little more into weird pop, which I like a lot.

MC: With you on drums it's going to be weird pop.

Brian: Yeah, I love that -- it's going to be weird. He takes his time building those parts. But at the end, man, they're amazing

Mic: That element is definitely there on the new track.

Mic: I like to try to bring a voice to what I do. I'm definitely not trying to steal the show, but I want my part to matter, not just be completely incidental. So there's the thing that you can play...you can write a part that actually has a voice.

Brian: But I think also you're down to playing a pop, straight-up 4/4 beat if I needed one. If I really, really feel strong about it, you could feel good about that...

Mic: Yeah, exactly, that's a good thing about playing with a band of seasoned musicians. It's a band of grown ups and everybody's got their ego in check. I've been in bands before where that's not the case and it's difficult to get anything done when things are a lot more volatile. I'm trying not to drop any names.

Brian: Yeah, there's nothing volatile about our band.

MC: That's the thing in these situations when you're playing with people that you respect and they're actually your close friends that you'd be hanging out with anyway. There's no actual leader; there's collaboration with direction but there's no fucking ego to follow around.

Mic: And the other cool thing about it is that it's an impetus for us to hang out together.

Brian: That's is very true; it's the main reason why I want to go out of town at this point. The merits or benefits of going out of town to build an audience is dubious at best, but the great part is that it binds the band together: it's an excuse to go on vacation with your friends and it gets the band a hell of a lot tighter musically too.

Mic: And you have to stay in touch. Sometimes you could really like somebody and fall out of touch just because you don't have that thing and the music brings us together...and you can quote me on that.

MC: Oh, that's a cherry of a quote you've got there.

Mic: Did you get that? "Music keeps us together."

MC: We got it. So what else you guys want to talk about?

Brian: We're workshopping new songs week to week one at a time basically. My goal was to have an EP by the end of summer, but we're more likely to get something the fall.

MC: And what about the single-release show with Dressy Bessy and Schwervon! on the 10th.

Brian: It's going to be awesome. Dressy Bessy's been friends of mine for years now. I used to bring them in back in the mid-2000s. I used to do some independent booking in St. Louis. I basically started booking touring bands because I wanted to give my band at the time better gigs since I could never get opening slots for bands I wanted. Anyway, we all started doing that, right? And Dressy Bessy was one of the bands that had never played St. Louis. I was actually a big fan of Apples in Stereo and John Hill of Dressy Bessy is the guitarist in Apples in Stereo, so that's how I got there. I fell in love with them and starting bringing them to town and we became pals. And I'm super-excited to get them into Foam in a situation where they can make all the money that comes in the door. And it's such a tight room, it will pack up and become a party easy. So I've been thinking about that for a while and I'm glad it's working out this year.

Mic: I'm looking forward to kicking it with them, honestly. They're really fun people and we were fast friends when we met.

The upcoming "Hop To It" release show will be held 9pm Friday, June 10 at Foam with K.C.'s Schwervon! and Elephant Six associates Dressy Bessy.