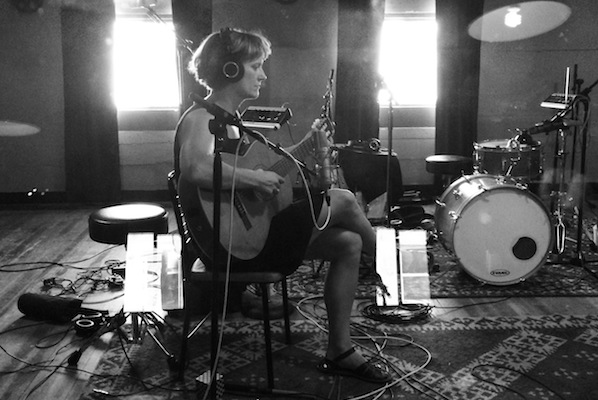 The Uncertainty of Presence: An Interview with Laura Gibson

There is a haunting presence to Laura Gibson's music--something otherworldly that lurks in a too-near distance. A profound sense of the past inhabits her sound, but it finds a way to elude easy capture. Her sonic genealogy is one of ghosts playing at the margins of apprehension, as though they delight in luring would-be comparers down inconclusive paths. The dark, jazzy lilt of Gibson's voice and the rich instrumentation of her albums are not unfamiliar, and yet her music has a kind of atemporal quality. It is immediately and persistently subtle. It is also as close to beautiful as one can admit without blushing.

Gibson's most recent album, Empire Builder (Barsuk Records, 2016), articulates a deep sense of longing that is offset by ambiguity and uncertainty. The title track recounts a cross-country trip that conveyed her from her native Portland, Oregon, to New York, where she would begin an MFA program in Creative Writing at Hunter College. Liminal and irresolute, the song's sentiment oscillates as though the hills and valleys in the window: "Oh, forget I said love / but also don't forget I said love // We are not alone / and we are more alone than we've ever been / So hurry up and lose me / hurry up and find me again." Upon arriving in New York, the thrill of a new creative life was besieged by unexpected challenges, including a broken foot and a deadly gas explosion in her apartment building, which destroyed almost everything she owned. The resulting songs resonate with grace and force; Gibson was kind enough to share her insight into their evolution, as well as the influence of fiction on her songwriting, in advance of her upcoming performance in St. Louis on June 28.

David B. Olsen: As one learns more about how Empire Builder came to be, your move from Portland to New York is inescapably significant. There's an sense of displacement, of loss, of pain--whether it's emotional or physical--and even a kind of literal devastation, which was tragic given the loss of life involved, but also tragic in another way for you: the loss of your instruments, your lyrics. I think it's no surprise that the record feels at once vulnerable and resilient.

Laura Gibson: The decision to study fiction in New York was really hard to make. I'm so comfortable in Portland, but I felt I needed to stretch beyond my comfort zone and achieve some space. I kind of rediscovered songwriting as a way to process that moment. I was so raw, personally, when I wrote these songs and a lot of the vocals were recorded just a week or two after the fire. I'd originally planned to go to the studio but then tried to cancel the time. John Askew, who engineered the record, encouraged me to come in and just hang out with the songs, with no pressure to make anything. I ended up recording vocals for six of the songs, and I can hear in my voice how raw I was. I had no ability to perform at all, so the vocal takes feel very plainspoken in a way. Lyrically, I was also a bit braver on this record--partially due to maturity, perhaps, but also because of the circumstances that required it.

DBO: Independently of the events that the album recounts, or which led to its creation, Empire Builder also feels very much within the trajectory of your music over the course of several albums. I wonder how you see this record as a part of something to which you'd already been building.

LG: The best way to approach any project is as one from which you can learn. I approached my previous record, La Grande, with no bounds going into it; I just started with everything that I could, so that I could discover what worked. This time around, I had my ideas more in place and more confidence in my arrangements. I wanted to work with a smaller palette for Empire Builder. I wanted no other chamber instruments except strings, and particularly high strings--violin and viola. I wanted more electric guitar. Even if it sounds varied, there are actually not that many instruments. There's a point when there are twenty violin tracks, for example, but they're all the same violin.

DBO: You mentioned the rawness of the vocal takes, occurring so recently after, or within, such a challenging and uncertain moment in your life. Have the songs grown or developed over time as you've performed them live?

LG: I'm kind of always changing songs, actually. I'll forever be fidgeting with words after the song has been recorded. I feel like they are still kind of living in a way; I can change them--sometimes intentionally, sometimes by mistake. I can forget what I sang on the record, because I've sang it so many different ways since then. When I recorded a lot of Empire Builder, it was so raw and I really hadn't practiced singing them; it just kind of came out. Now I can be a little more controlled and grow into my voice as I tour with the songs. It's nice to be able to learn different ways to sing them.

DBO: I imagine with fiction it's somewhat different, too, in that the words become fixed in place upon their publication, or at least one imagines fewer opportunities to alter them after the fact. Has your formal attention to writing fiction inflected your songwriting in any way, given the different means by which the words reach their audience?

LG: There is definitely some crossover between my songwriting and my fiction. Already as a result of the fiction program, I've tended to be more specific in the objects and scenes that I use in my lyrics. When I first started writing fiction, I often wanted to be abstract in ways that would pay off in songwriting but don't necessarily pay off on the page. On this record, I also really wanted to ground the abstract ideas that I was wrestling with in very solid things--the peeling of a clementine or mistaking the singing of birds for a cell phone ringing.

DBO: That moment in Empire Builder when you hear a birdsong as a ringtone is particularly evocative, I think, because it attests to the ways in which we unwittingly refashion the world according to our own immediate needs. Or how perception bends to the wills of desire, loss, or longing.

DBO: Does your music reflect contemporaneity in any other ways? Or, how do you imagine your music in a very real now?

LG: This time around, I felt more aware of being in the moment, particularly my moment. When I look back to my first record, it is very much about imagining myself in another time, era, or place--both lyrically and sonically. I love all sorts of old sounds and all sorts of futuristic sounds, but I am also very interested in the world right now--interacting with that world and writing about those interactions. Empire Builder feels like my most present record; there is less dreaming up worlds in order to explore the things that I'm going through and instead more observation of my own world in which those things really exist.

DBO: At the end of the song "Louis," you admit that "The only song I know to write is 'Look at Me, Look at Me, Look at Me.'" This seems like a truly honest and humble moment--being present, but asserting a very fundamental need to be seen. And yet it is framed as though that impulse somehow inflects the work of creative expression more generally.

LG: The first time I ever played that song, the audience laughed at that line. I think they were surprised by it, and not sure what to do with that sort of statement. I like the surprise of this line, because I have moments when it all comes down to the question: is this all just to be seen, or to have attention paid to me? And if so, is that okay? Is that valid? Does every song just kind of come down to me shouting "I'm a person!"? A lot of the record explores what it means to be an artist, and in so many ways, one of the best ways that I am able to love is to make songs or make writing. But at the same time, the making of those things often conflicts with spending time with the people whom I love. And then there's not knowing whether writing these songs actually, like, "counts" toward that love.

DBO: Do you ever feel that you have to reconcile the desire to read with need to write? Or reconcile the desire to listen to music with the compulsion to perform or to play something yourself? I often find myself choosing to consume rather than produce or to catch up on something rather than bring something new into the world. Given that your own creative output now extends into both music and fiction, I guess I wonder how you find the time.

LG: I go back and forth between feeling the pure enjoyment of things and feeling like they are somehow connected to what I'm doing. The best thing, though, is to read or to listen to something and be completely lost in it, forgetting that you ever intend to do that yourself. It is such a gift when you can read something and it takes you out. When it is pure pleasure or pure beauty, or delight. When I'm reading, I want to forget that I want to be a writer, and when I'm listening, to forget that I have any intentions of making my own music.

Laura Gibson will perform at The Old Rock House with David Bazan on Tuesday, June 28, 2016.