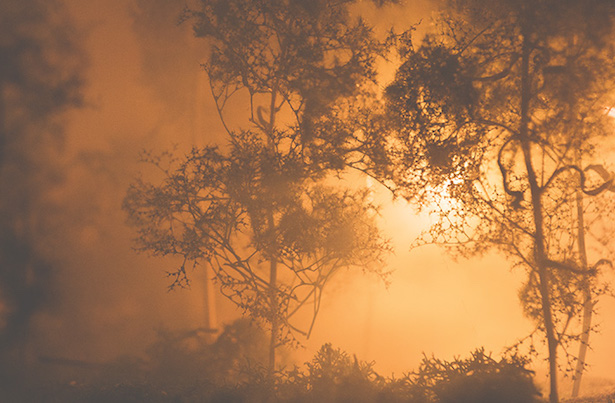 When I listen to Mandolin Orange's newest album, Blindfaller, it makes me think of walking away from the campfire and down along the railroad tracks, with a heart full of love, toward or away from hazy trees like those on the cover in yellow-red gradient, low on the horizon. As though David Lynch led you down the hallway of one of his rustic cabins in the woods, Mandolin Orange quickly engulfs you, playing the songs you hope to hear next, like at a high-school dance, when you want to dance with the one you've had your eye on and the song finds the words you wish to say. Together Andrew Marlin and Emily Frantz, both multi-instrumentalists, create the fold of a simple symphony between their lyrics and their instruments. Beyond that, their songs are just down home country-good but with a broader political conscience than you might typically find even among the new alt-country.

The first time I listened to Mandolin Orange, it was so clear to me that they were masters of their instruments, playing them like they are counting pennies to make a dollar. So simple, so easy, and so skilled, it is easy to be intrigued by their playing and overlook the sentimentality of the lyrics that begin to unglue you, even if they're difficult to parse at times, which would be my one complaint. Just focusing on their harmonies is a great way to listen to their music but there is so much more. What is easy to grasp -- and what I find most enjoyable in their music -- are the wide expressions of love on Blindfaller.

Nearly every song is about a different aspect of time passing, like a sunset or a sunrise; they seem to move in circles, but like life, the effect ends up being more like cycles within a poem or a narrative. It's the kind of album you want to listen to over and over when you wish you were somewhere not in the city, witnessing the ever-changing array of seasons, thinking about some difficult things like parts of your relationships that are tough to navigate.

Together with Clint Mullican on bass, Kyle Keegan on drums, Allyn Love on pedal steel, as well as previous collaborator, Josh Oliver, on guitar, keys and vocals, Marlin and Frantz have made an album full of well-written and well-delivered songs with the air of instant classics, as Marlin hopes, the kind that others would want to cover. Their timeless playing and crafted lyrics send them well on their way to the stars. You just can't beat simplicity.