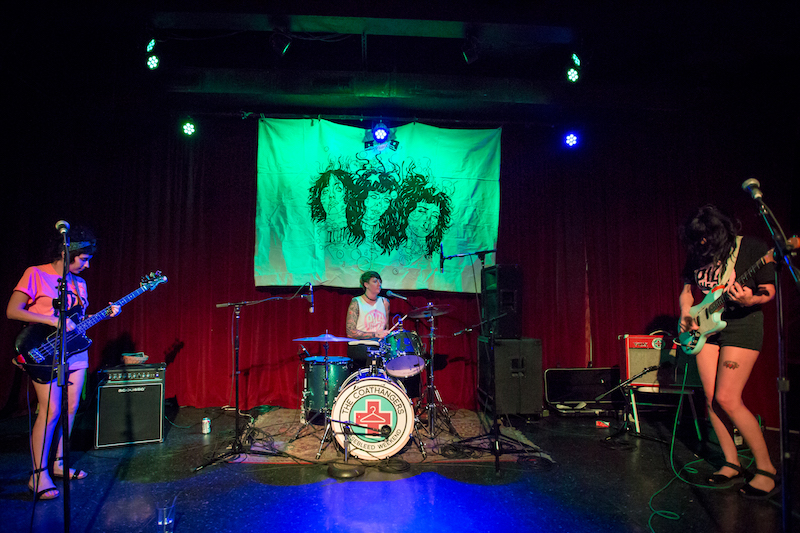 The Sisterhood of Punk: The Coathangers at Off Broadway

Music has a gender gap: I'm not trying to pick any political fights here but it's a fact. Yes, the music scene isn't the boy's club it used to be -- thanks, second-wave feminists! -- but the problem still remains. For example, in a survey of ten major American music festivals, female-only artists made up only 12% of all acts, as compared to the whopping 78% of male-only artists. It's probably not a stretch to say that people notice when there aren't all that many girls on-stage -- I know I do.

It's no wonder I find the Coathangers, an Alanta-based trio composed of guitarist/vocalist Julia Kugel, drummer/vocalist Stephanie Luke, and bassist/vocalist Meredith Franco, so refreshing. It's always extremely inspiring to see other women in the spotlight -- especially with an act so unrestrainedly fun and self-confident. (Consider the closing song of the night, "Squeeki Tiki" off of 2016's Nosebleed Weekend, which features a dog toy's squeak as its instrumental hook. I never thought I'd see someone rocking a dog-toy solo, yet Luke, jumping into the crowd with toy in hand, seriously killed it. Who would've thought headbanging to a dog toy could be so fun?)

Last Thursday night's show was rounded out by the two openers. First was the Maness Brothers, a St. Louis duo whose sound is a heavy, gritty blend of blues and rock, which was not only powerful but straight-up loud -- like, loud enough for me to cave in and buy a pair of earplugs. With long hair and intimidating, all-black outfits, one look at the Brothers suggests that their music is just as intense as their aesthetic. And, boy, was I right: their latest, self-titled album is not just a harsh intersection between genres but an important lesson in ocular health -- the faint of ear need not apply. Also on the bill were The Residuels, an all-male trio hailing from Philadelphia. Their sound channels the inclinations of 70s punk (think Sex Pistols and Dead Kennedys) and is a bit more accessible than The Maness Brothers. The Residuels' latest release, a single titled "You'll Cry," is a catchy rock anthem with a decidedly American twang.

After two male-only bands, it's all the more exciting to see the badass ladies of The Coathangers stride into the limelight, backdropped by a gigantic banner of their siren personas from the cover art of their latest EP, Parasite. The Coathangers' merit, however, is in no way limited to their gender; to call them a "girl band" would be a minimization of their talent, which undoubtedly stands up to the best male and mixed-gender punk acts of our day. Their sound lands somewhere between the harshness of the Ramones and the vocal flexibility of the Slits, a cool amalgam of commercialized punk and proto-riot grrrl. The Coathangers are not afraid to push the boundaries of their vocal capabilties; "Parasite," the title track off of the EP, is almost entirely screamed. (When Luke yells "Why I oughta!" at the crowd, I can almost feel the sucker punch that would probably ensue.) While "Drifter," the last track, is -- dare I say -- a slow, contemplative ballad.

What really ties The Coathangers together, however, is the irreverent humor with which they approach gender, punk, everything. Not only do they have a song called "Nestle in My Boobies," which is a hilarious (albeit on-the-nose) approach to the whole "girl band" thing, but their stage presence is that of a band whose purpose is to have fun and make music doing it. Take, for example, their live rendition of "Wipe Out," during which the phrase "You're not sorry" is passed around from person to person: I can see the musicians smiling as they repeat each other's phrases, like in a campfire song. All in all, The Coathangers are perhaps one of the few bands I've seen this summer who have actually looked like they were having fun on-stage. (You'd be surprised at how many acts overdo the 'cool persona' thing and just end up looking glum!) "We're sisters from another mister," Luke tells the audience. In their matching Pizza Head shirts, it's a statement that's easy to believe.

Click the image below to see all of Dustin Winter's photos of The Coathangers with The Residuals and The Maness Brothers at Off Broadway. 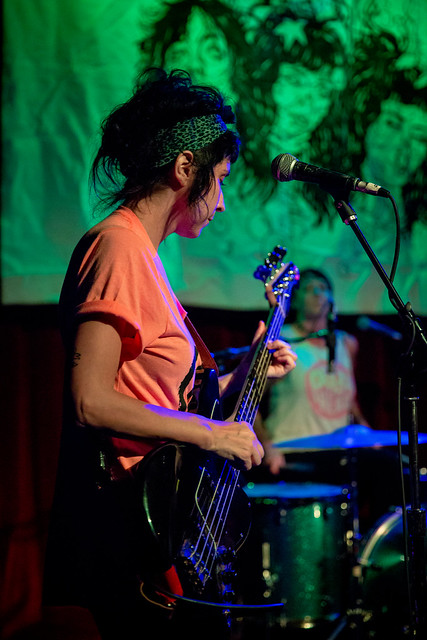