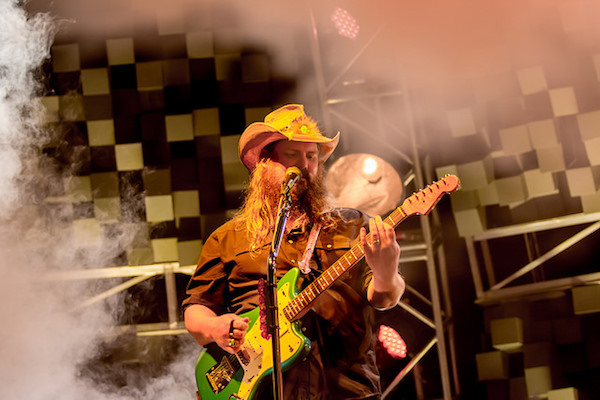 Love, broken hearts, the South and, oh yeah, lots of whiskey. The classic country themes thrive in the pores of each Chris Stapleton song with only slight modernizations found in guitar-wrangling and slick, soulful grooves.

Dressed in black and hiding under a cowboy hat, Stapleton walked on stage this past Saturday as if he were walking to his regular perch at the bar. Without accompaniment, the explosive songwriter plugged in and hammered out the bluesy wash of "Might as Well Get Stoned" for an opener. Belting out the sparse chords and lyrics of the first verse solo, he established an intimate yet absolutely invigorating presence for the night.

The ass-kickin' country continued with Stapleton punishing his guitar as it screamed and pleaded on "Nobody to Blame." As he switched to acoustic, the minimalist band (bass, drums and Mrs. Stapleton on backup vocals) segued into a more introspective "Broken Halos." Calling to mind the universal and bittersweet chords and melodies of U2's "I Still Haven't Found What I'm Looking For" or Springsteen's "Atlantic City," "Broken Halo" is the kind of song you know and love before you even hear it. And on the simple marquee-lit stage, the song and sentiment seemed no less important and uplifting.

Swapping guitars like I was swapping beer cans, the country-fried set found Stapleton easy within the many facets of his music. Whether ripping blues solos ("Hard Livin'"), screaming in distress ("I Was Wrong") or serenading his wife ("Whisky and You" and "More of You"), the towering frontman made sure to include a variety of songs for "hillbillies and the hippies" alike. Songs of vulnerability ceded to ballads of sweltering frustrations as Stapleton maintained the essence that haunts the highs and lows of country music.

One of the many things that separate Stapleton from the pack is the aggressive yet fluid guitar playing. He picks out memorable melodies, hits grimace-inducing highs and even pulled the staccato one-chord buzz-saw solo. The guitarist showcased his SRV-inspired soloing via "Sometimes I Cry," "Second to Know," culminating in the extraordinary and soulful "I Was Wrong." Only his soulful screams (on par with Janis Joplin!) are as expressive as his guitar playing. Stapleton stepped out of the country comfort zone with these songs, laying down a stylish and groove-oriented sheen more akin to Otis Redding than Tim McGraw.

Such is the essence of Stapleton; used to hiding behind the veneer of songwriting credits, he encompasses as many moods as he does characters and genres. But rather than emphasizing this, or even showing awareness, he naturally jumps from Skynyrd covers to modern country classics such as "Traveler" or "Parachute" without batting an eye. But in true country fashion he concluded the night with "Tennessee Whiskey" and declared that it was indeed time to go drink some whiskey.

Opening acts Margo Price and Brent Cobb were a real treat to hear as well. Cobb presented gentle guitar arpeggios and the type of songs that make you want explore outdoors. Whereas Price livened up the crowd with energetic country tunes that wouldn't sound out of place in the sixties.

With minimal rockstar posturing or attitudes and exuding humility and professionalism, these artists exhibit a certain selflessness and humility not likely to be found at many sold-out shows.

To see all of Karl Beck's photos of the evening's performances, click on the image below. 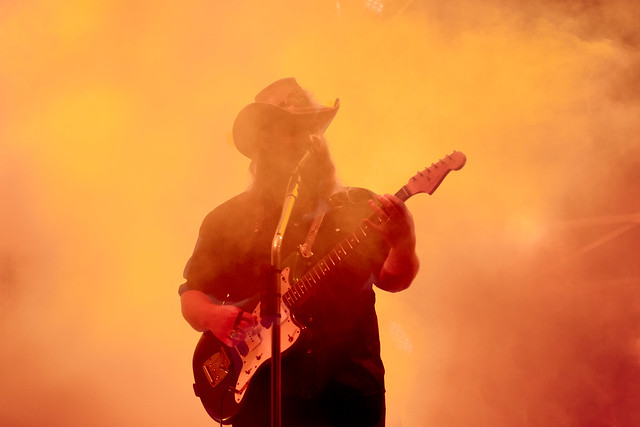