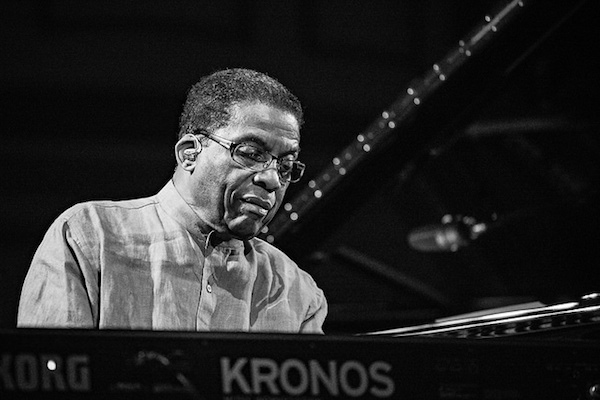 Herbie Hancock presents the future of jazz to Powell Hall

In over 55 years of recording with the most celebrated names in jazz history, Herbie Hancock's musical story has developed into a legend of epic proportions. Currently working on his forty-second studio album on top of nearly 150 appearances in a supporting role, he's been recognized for his technical skills from day one. He has since become a constant driving force in the genre with a keen ear for the cutting edge of style and technology. With a hand-selected line-up of fellow innovators at his side, Herbie Hancock offered a fortunate audience a taste of his fruitful history and a glimpse to the emerging trends on the jazz horizon.

The crowds spanned the generations and spilled onto Grand Avenue on a pleasantly mild August night, eager to find their seats among a nearly full house at Powell Hall. The ample stage, normally home to the St. Louis Symphony, dwarfed the array of keys, strings and drums at the forefront. The anticipation and conversational murmur rose until the lights cued an immediate silence. After a brief introduction from Gene Dobbs Bradford, Executive Director of Jazz St. Louis, the band took the stage to a warm welcome that overflowed into the evening's first standing ovation at sight of Herbie Hancock.

The set opened with a largely new experience entitled "Overture," a lengthy piece that was broken into three distinct sections, subtly changing with new styles and moods. It began with a progression of arrhythmic tones and aural textures, slowly gathered by drummer Vinnie Colaiuta and ultimately brought to a melody from Terrace Martin on the alto saxophone, who then offered a rather cheerful solo before relinquishing the spotlight to the band's inimitable leader. Hancock's solo offered a demonstration of his technical abilities that surely quelled any doubts from critics in the room, while still playful enough to please the casual listener, moving from syncopated rhythms and juggled phrases to a funky groove that fully engaged the audience.

As the opening number progressed, the audience took advantage of every rest to voice their constant approval. The second section displayed the beauty of the grand piano, with Hancock in the spotlight throughout the movement, before guitarist Lionel Loueke took the helm for the final segment. Loueke's part blended three elements, a rhythm of oral taps and clicks, a percussive and staccato part on his guitar and a strong vocal effect that mimicked the sound of an electrified choir singing melodic African chants. It soon developed into a full band funk jam and Hancock offered a keyboard solo that was rich with pitch bends and chuckles before finishing the piece on the grand piano, one of countless times he changed fluidly between the two.

Once the extensive opening number concluded and its due uproar had subsided, Herbie Hancock addressed the crowd. He recalled his early days supporting Donald Byrd in St. Louis, now a half century in the past, with a youthful energy he summoned from the memory. With jokes aplenty, he honored each of the band members with a lengthy introduction that included both their histories and personal significance to Hancock himself. For those who were able to enjoy his 2012 performance at the Touhill Performing Arts Center, the lineup featured familiar faces from James Genus on bass, as well as Loueke on guitar, who has also made four night appearances at Jazz at the Bistro as both a band leader and special guest.

At the far right side of the stage, Terrace Martin's role surpassed that of his saxophone, adding a pair of keyboards that included a vocoder that made many appearances in the harmonies of the night. In addition to his musicianship, Martin is also an accomplished producer, recognized for his work across a number of genres as well as taking the helm of Hancock's upcoming release. Vinnie Colaiuta, encapsulated by a rack of drums and cymbals the size of a small sedan, sat atop his throne in the rear of the arrangement and remained a constant driving force with his endless selection of riffs and rhythms.

As the set progressed, each song offered a distinctive approach and innumerable opportunities for each of the musicians to stand out. "Actual Proof" was reminiscent of the Head Hunters style and era, including a lengthy solo from Hancock, broken down with Loueke and Martin withdrawn to the side, and time to spotlight Genus and Colaiuta's prowess. They continued with another selection from the '70s, "Come Running to Me," but with a highly effected and electrified tone. Brandishing a headset, Hancock provided the vocal lead through a vocoder, backed by Martin in a similar flavor, while Loueke flaunted the spectrum of instrument tones available through his effects set-up. The next selection was another new piece entitled "Secret Source," allowing many of the musicians to exchange licks in playful duels and bringing Hancock to his feet with his iconic, white keytar.

For the finale, the band turned to one of the most classic tunes from Herbie Hancock's bountiful repertoire, "Cantaloupe Island." Terrace Martin lead the melody with his alto and offered one of his most notable solos of the evening, while Hancock's time in the spotlight embraced a joyful mood, enchanting the entire theater into a state of delight. He reintroduced the each member of the band with accompanying demonstrations of their individual abilities before they closed the set to another standing ovation.

The crowd remained on their feet throughout the relatively brief period before the band returned to the stage. James Genus silenced the applause with a deeply funky bass line and the musicians enthusiastically reclaimed their places at center stage, Hancock armed again with the keytar a stage hand had not so surreptitiously removed during the finale. From the Head Hunters album, "Chameleon" kept the crowd out of their seats and even moved some feet as the funk groove jammed on in a series of playful exchanges between performers. While youthful beyond his years throughout the entire night, the star now found himself bouncing up and down on the stage with an incendiary jubilation, igniting the already exuberant crowd into a final uproar of approval before the final farewell.

Click below to see all of Doug Tull's photos from the evening's performance. 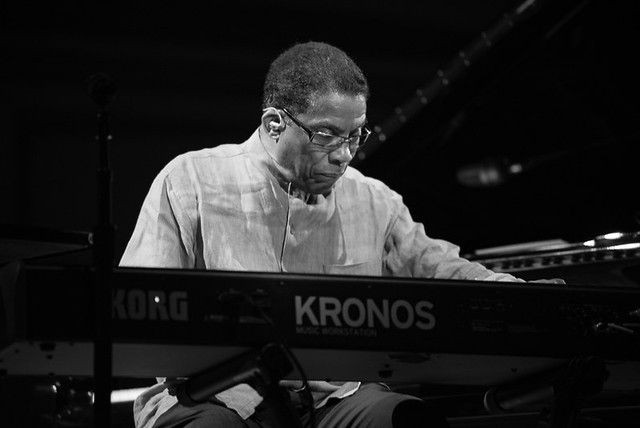