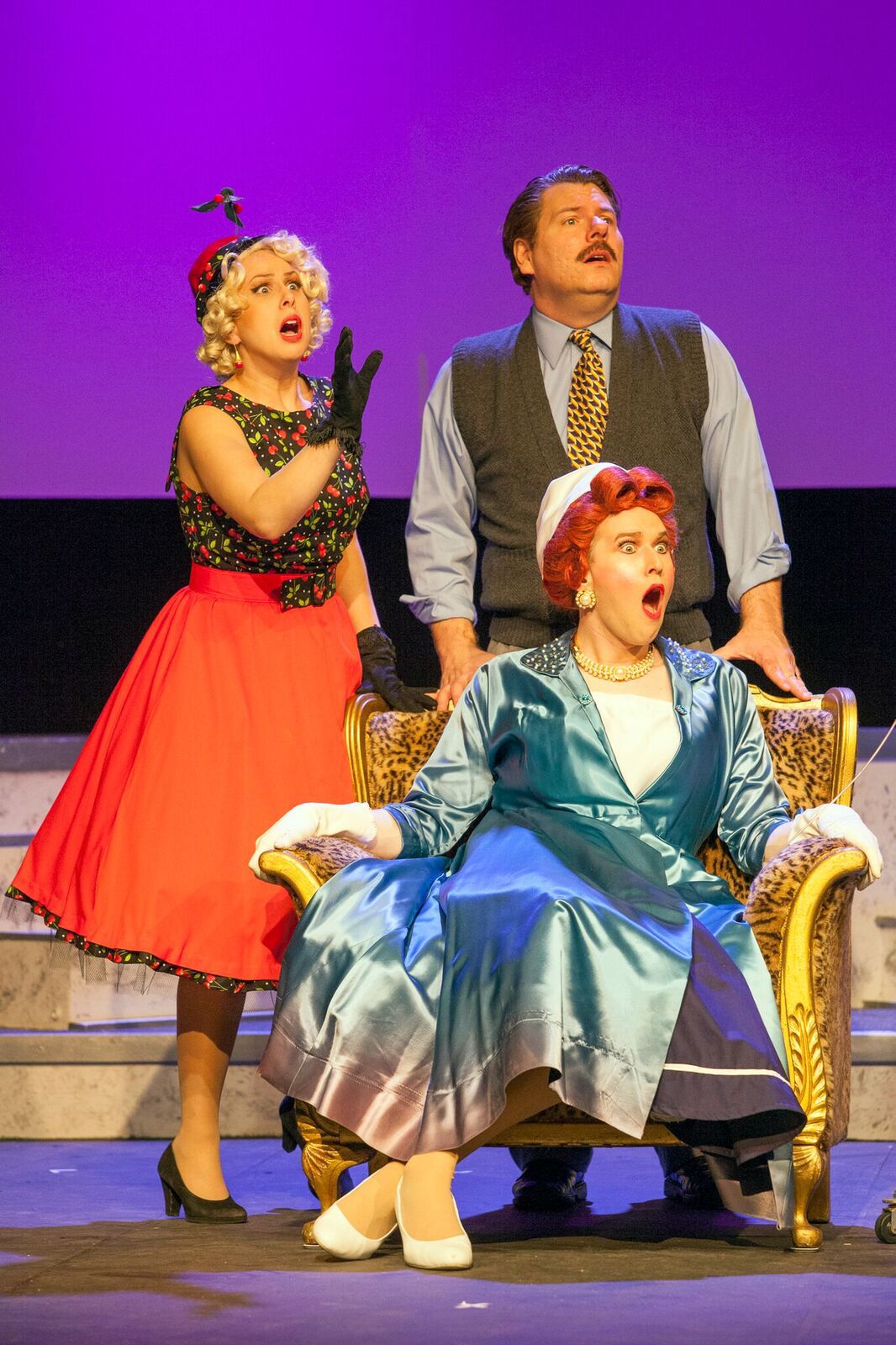 ‘Red Scare on Sunset’ is a gloriously funny, flag-waving send-up of American exceptionalism

Stray Dog Theatre once again provides an evening of wit and hilarity from playwright Charles Busch, this time with their production of “Red Scare on Sunset.” The over-the-top, patriotic comedy set during the McCarthy era stops just this side of camp as it skewers our nationalistic tendencies and celebrity obsession with much affection.

Mary Dale is the mom-on-film of the moment. Always perfectly dressed and made-up, always playing her part, she hears her friend Pat Pilford’s concerns about communist infiltration but doesn’t really pay attention until the matter hits home. Her husband Frank, an aging hunk finding his movie parts dwindling, has taken up with a method acting class that is likely recruiting for the communists! Is it possible Frank has turned red? Could it be her commie-outing friend Pat has joined them as well? Mary realizes something is amiss and she must save her loved ones.

Will Bonfiglio is simply delightful as Mary Dale, with an always perky and positive attitude that’s guilelessly unsophisticated. Gliding around the stage in stiletto heels, posing rather than standing, and punctuating key lines with meaningful looks thrown directly to her audience, she’s uninformed but fearless. Bonfiglio gives Mary a friendly, somewhat giddy and girlish personality, adding off-kilter charm to the optimistic character.

Stephen Peirick is humorously melodramatic if a little slow on the uptake as husband Frank, and he over articulates with a pointed precision that becomes more enjoyable as the show unfolds. Shannon Nara is gloriously pro-American and naturally hiding a few secrets of her own as best friend and radio personality Pat Pilford. Her delivery is classic radio comedy shtick, perfectly accented with big gestures, loud outfits and elaborate hats.

Gerry Love, Ariel Roukearts and Chris Ceradsky are dedicated to the communist cause and willing to do whatever it takes – including seduction and blackmail – to coerce membership in the party. In contrast, Michael Baird and Stephen Henley seem more caught up in self-interest and illusions of grandeur rather than politics. The lead and supporting roles are all delivered with appropriate exaggeration, ensuring “Red Scare on Sunset,” directed by Gary F. Bell, moves at near breakneck speed and is filled with visual pranks that complement the outlandish story. The result is over-the-top comedy that mocks America’s best and worst tendencies with equal glee.

As usual, the company makes the most of the somewhat odd dimensions of their theater with a clever multi-level set, designed by Rob Lippert with lighting by Tyler Duenow and scenic painting by Miles Bledsoe, that reflects the golden age of Hollywood and the mid-century aesthetic of the times. Costumer Amy Hopkins completes the picture with gorgeous period appropriate outfits that cleverly incorporate color and accessories to provide a quick visual reference to each character’s loyalties.

Busch is known for writing sharp, perceptive comedy that holds a mirror to American society and Stray Dog Theatre heightens the reflection with a highly stylized production that hits all the right marks. Bonfiglio sparkles and flutters as the popular star who’s as concerned about top billing as she is about the future of democracy. Peirick garners sympathy as a man who works doggedly to be something more substantial than arm candy even if his character doesn’t quite possess the talent to do so. Nara expertly captures the patter and mannerisms of the east coast housewife-turned-comedienne trope that permeated the airwaves with not-so-subtle calls to family, religion and patriotism. Each of these characters exhibits typically American attributes that are generally viewed as positive qualities.

The script comically points out that our strengths often create blind spots and almost everyone has secrets, offering an interesting coda to the laughter-filled evening. The efforts made to keep up appearances and bury those secrets are quite funny on stage, but we’re reminded that the truth usually reveals itself and often with serious repercussions.

The closing scene of Stray Dog Theatre’s “Red Scare on Sunset,” running through February 24, is all American flags and list naming. At some point as you’re clapping enthusiastically, it may occur to you that our heroine is sweetly and ecstatically adding her husband, friends and coworkers to McCarthy’s infamous blacklist. The thought, no matter how unsettling, will likely not deter your enjoyment of the humor and excellent performances.