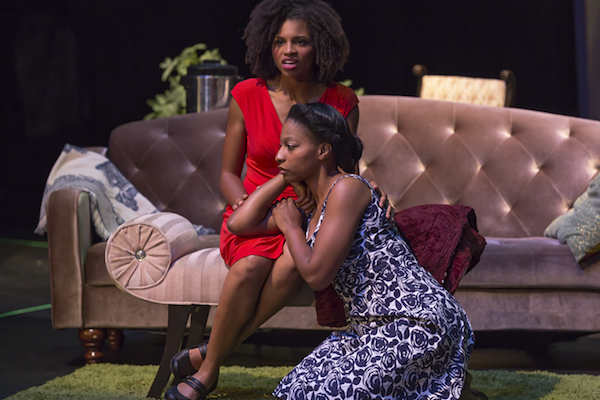 One of the biggest changes at the sixth annual St Lou Fringe Festival, which ran in the Grand Center Arts District from August 17 through August 26, 2017, is the addition of headline acts. The three shows were selected by the Fringe artistic staff based on their applicability to the philosophy of producing and promoting works that push or explore theater in unexpected ways. Two of the shows originated with St. Louis companies ERA and Ashleyliane Dance. The third hails from Northern California and is headed to New York City. All three generated considerable buzz leading up to the festival. The three headline shows are reviewed below; reviews of St Lou Fringe Festival award winning productions as well as the other shows produced are also available.

A Song for Vanya is a surprising musical interpretation of Chekov's Uncle Vanya presented in two acts. The moody show is provocative and interesting, with a sense of longing that hangs heavy in the air; and the score is almost operatic. Strong performances and pointed direction emphasize the desperation inherent in the story, though work is needed to better deliver the necessary emotional hills and valleys. Simplification of the layering of songs is also recommended. The effect is brilliant in moments like the close of the first act, but becomes tiring when over-used.

Vanya and his niece Sonya are the caretakers of the family's income-producing country property. Along with Vanya's mother, their servants, and family friend Telegin, they live a life of relative isolation and peaceful if at times difficult days. Dr. Astrov, the town's physician and Vanya's closet peer, as well as the object of Sonya's affection, visits regularly. His visits are even more frequent since the professor and his glamorous young wife Yelena came to stay on the property. Anger, lust, and jealousy ignite numerous quarrels, hope fades, and yet, somehow, after the tension is released in a spectacular outburst, everyone persists.

The leading women in the show, Jeanitta Perkins, as Sonya, Alicia Reve Like, as Yelena, and Selena Steed, as the Nanny, provide the acting and vocal experience needed to give the show a solid foundation. Perkins is lovelorn over Astrov and lonely for a friend, Like is weary of country life and the attention of the other men in the house, and Steed is constant, kind, and steady as the loyal and reliable nanny. Gheremi Clay is a young Vanya, bringing more fire and energy to the part than typical, and it works well in this production, particularly when countered by Abraham Shaw's smartly affected gravitas as the Professor. The main problem I have with the show is the script. There's simply not enough emotional or plot variation to create the necessary highs and lows that enable tension to build, and the adaptation feels like it's left holes where more exposition should be.

ERA presents Snow White, a deconstruction of the fairy tale that emphasizes the character archetypes and psychology over plot. The approach may be a bit disconcerting to some audience members, but the journey is both oddly satisfying and cognitively confusing in a way that works like a surrealistic painting. There's much to the play that's recognizable even though the completed picture is not necessarily what's expected.

The assembled cast is engaging and quite talented. Julia Crump, Will Bonfiglio, and Maggie Conroy create well-defined interpretations of Snow White, the Prince, and the Stepmother. When each is acting from a different spot on the large stage, it's difficult to choose whom to watch. Katy Keating is increasingly absurd and effectively overdramatic as the narrator and Snow White's mother and, while all seven men living with and attending to Snow White are engaging, Reginald Pierre, Pete Winfrey, and Mitch Eagles stand out. The choices made regarding the spectre in the mirror are subtly brilliant, and the Stepmother's obsession with youth, beauty, and pleasing the mirrored man offer a cutting observation of femininity. Snow White's reticence and uncertainty rings with a contemporary tone that's seemingly underscored by her sexual dissatisfaction. While the preparation of the fruit salad is hilarious, even that effort fails to satisfy her.

The play winds along with a sense of reckless purpose that clearly delights in tearing down the familiar, I simply wish the parts would enhance the whole to greater effect. Recognizable threads from a more traditional Snow White are scattered amongst a multiplicity of source material, and the director provides two letters to the audience. The first contains instructions on how to think of and approach watching the production. The second is a letter from the Stepmother that is, as we're informed, intended to be purposefully annoying. And therein lies the apparent weakness of ERA's Snow White. We are too often told rather than shown and the effect is draining, no matter how interesting and captivating the coterie of characters may be.

Ashleyliane Dance Company of St. Louis mesmerized late night audiences with Evolution -- Excerpts from "RISE." The uplifting performance is filled powerful, graceful dances in an ensemble that's both confidently diverse and expertly in sync. Under the direction of Ashley L. Tate, the numbers reflect the influence of Kathryn Dunham and Alvin Ailey, but also the energy of hip hop, the precision of a Broadway Chorus line, and the unbounded enthusiasm of a high school dance squad. Exquisite extensions and pointed turns seamlessly burst into shoulder rolls, stomps, and jumps without missing a step or skipping a beat, ensuring the show is filled with a sense of purposeful joy and possibility.