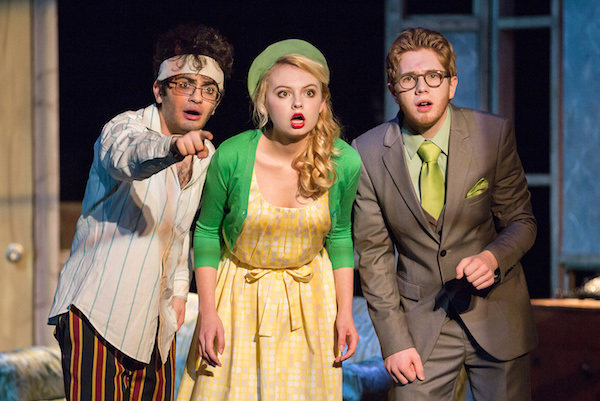 Imagine that you're a normal middle-class minion working in a boring office job, too tired to hope, too lazy to kill yourself, drinking a little too much. And suddenly people start turning into rhinoceros. (Or is it rhinoceroses? Actually either is correct.)

St. Louis University has opened a lively and colorful production of Eugène Ionesco's 1960 play, "Rhinoceros." The French-Romanian Ionesco was one of the founding fathers of what has been called the "Theatre of the Absurd."

Poor Berenger! He just doesn't fit in. He's in love with Daisy, his office receptionist, but he hasn't the nerve to approach her. His best friend, Jean, constantly berates him for his slovenliness and his drinking. He's in trouble for always being late for work. Then, a rhinoceros thunders through the town square! Then another! Can it be?

One of his co-workers has, it seems, turned into a rhino. More and more people are being afflicted with "rhinoceritis!" Now the city is full of the awful beasts! Everybody's doing it! Everybody's joining the herd.

Ionesco was a young intellectual in Romania and saw his friends being drawn into the infamous bloodily nationalistic sect, the Iron Guard. He was a mature writer living in Paris during the Nazi occupation. His play, "Rhinoceros," is a stilletto-sharp parody of mankind's innate herd instinct. We so need to join a tribe! We so readily fall in with the trending political fashion, be it on the left or on the right, no matter how irrational it may be, no matter what hideous moral beasts it may turn us into. One by one Berenger's friends yield to the urge to be like everybody else--a rhinoceros. They join the group with the most powerful, vital energy, no matter how destructive.

Designer Dan Giedeman gives us a simple set: at the rear, a view down a village street in forced perspective. Buildings at the side are indicated with mere skeletal frames which swing deftly to represent a café, an office or an apartment.

The talented cast is led by Andre Elsamian as Berenger, Zack Bakouris as Jean and Halli Pattison as Daisy. They and eleven other student actors maintain the madness and panic that strike this village as one after another of their friends and colleagues turns willingly into a monstrous beast. The streets are quaking with the thundering herd.

Some of the technical aspects seem a little stinted. In his transmogrification into a rhino Jean merely pops repeatedly in and of his bathroom, each time swabbing on a bit more green make-up and tying a longer horn to his head. Ionesco gives little help here, but a clever director and tech folks should be able to contrive something a bit more impressive. The sound of the tramping, bellowing beasts is also less dramatic, and less frightening than we need. The theater should shudder with their tread. The growing parade of rhinos is accomplished with black-clad stage hands carrying great photos of rhino heads.

The play was originally in three acts, and it's always seemed a little over long to me. Tom Murry has, I think, trimmed it a bit to fit very nicely in one long act.

All in all it's an effective, funny and, if you think about it, rather frightening play to present in today's political world.