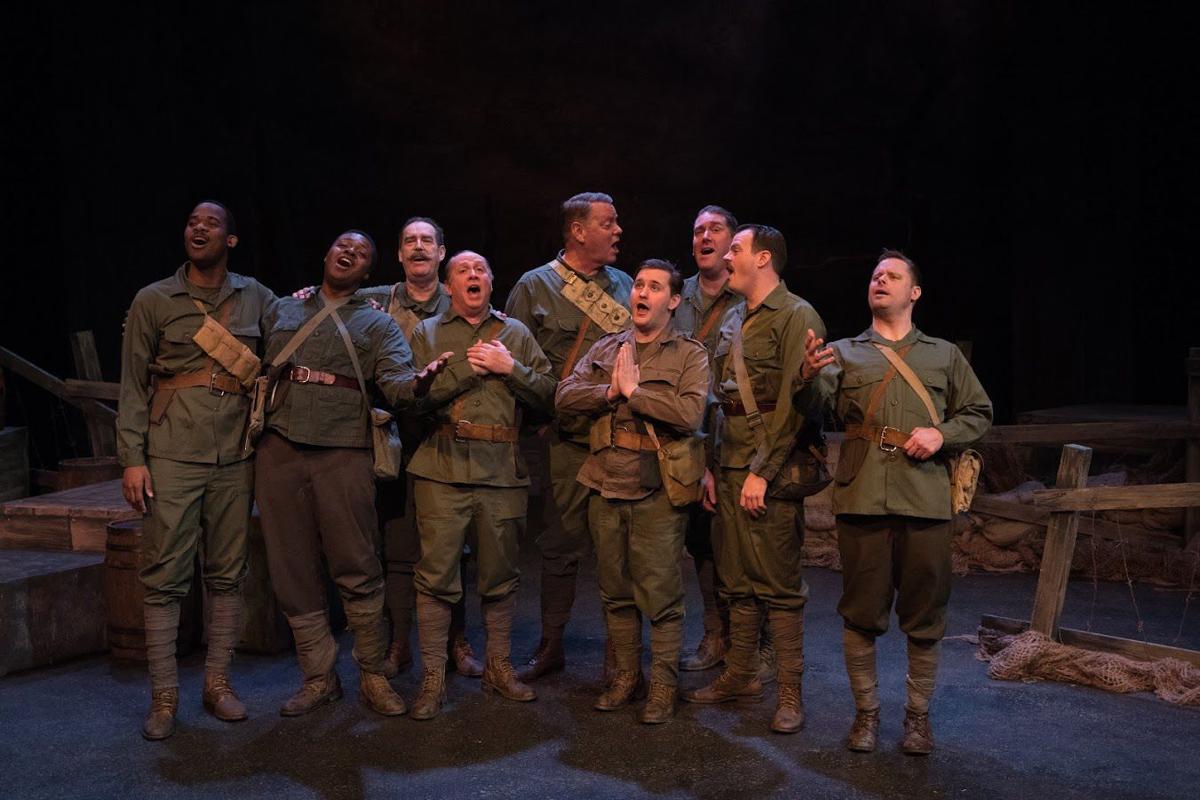 Mustard Seed Theatre reprises ‘All Is Calm,’ a tale of grace and serenity during war

After a year’s hiatus, Mustard Seed Theatre has brought back the powerfully persuasive “All Is Calm.” The a cappella musical tells of the spontaneous Christmas Truce of 1914, an evening of peaceful singing and exchanges between soldiers in the trenches during World War I.  The evocative musical with letters offers a glimpse into the turmoil of war, but is primarily a reminder that we have far more in common than our disparate languages, customs and national pride might suggest.

The battles of the war were of an intensity and scale that the world had never seen and the emerging fields of journalism, radio, and motion photography captured and shared the horrors of war in near real time. In the months leading up to the holidays, the Pope called for a Christmas armistice, but the Allied Forces rejected his plea. Still, the idea had been presented and must have reached and lingered in the minds of the soldiers on both sides of the trenches. On Christmas Eve instead of exchanging gunfire, they shared traditional songs and personal mementos or a game of soccer and, for one night, the battle fields rang out in harmony.

The show is told through letters home from soldiers on the front lines and popular songs of the era. The story opens with recruitment and enlistment, bright-eyed men eager to defend their country. The songs are upbeat and hopeful and the men jovial and lighthearted. The show turns more reflective and melancholy as the realities of war sink in. The German and Allied soldiers along the frontlines are so close that they can hear each other singing around the fires as the cold winter settles over them, and some start singing across the trenches in an almost playful back and forth. On Christmas Eve, the songs become carols. Slowly Christmas trees begin to line the tops of the German trenches and, eventually, a few soldiers dare to venture onto the field of battle. Hands raised, no weapons -- the others put down their weapons and join them.

The true story of the brief peace is beautifully expressed by the capable and finely tuned voices in this production, with sure guidance and reverence by director Deanna Jent. Veteran cast members Kent Coffel, Christopher Hickey, Greg Lehman, Gerry Love and Jeff Wright are joined by Anthony Heinemann, Michael Lowe, Sean Michael and Abraham Shaw in the emotionally compelling and deeply resonant musical. Heineman, a veteran operatic tenor, captivates with a classical rendition of “O Holy Night” that has a hint of soulful sadness and Shaw plays a bright but solemn-toned English bugle call on “The Last Post,” adding new highlights to the familiar show. But every song is executed to near perfection and every voice is strong, clear and on key in what may be the most accomplished vocal ensemble in the history of this moving production.

Kyra Bishop captures the rough hewn, rudimentary structures of a battlefield, while lighting designer Michael Sullivan, costume designer Jane Sullivan and prop master and scenic artist Laura Skroska add appropriate, unobtrusive details. The flashes of light from distant gunfire and sense of a cold and starry night are strikingly visceral touches. Attention to accents, rank and age help the nine-member ensemble present the stories of nearly three-dozen different soldiers, though newer members of the cast are encouraged to keep working with dialect coach Richard Lewis to capture variety and accuracy.

“All Is Calm,” continuing through December 16, moves quickly and effectively, creating a beautiful tribute to the ideals of peace and brotherhood that the season celebrates. The story evokes compassion for all humankind through the letters of the soldiers and popular music of the period. These lessons are well worth hearing, year after year, and the company always does an excellent job selecting and blending the voices of the ensemble cast. Families looking for a meaningful and reverent tradition for the holiday season should consider adding Mustard Seed Theatre’s stirring play with music to their plans.