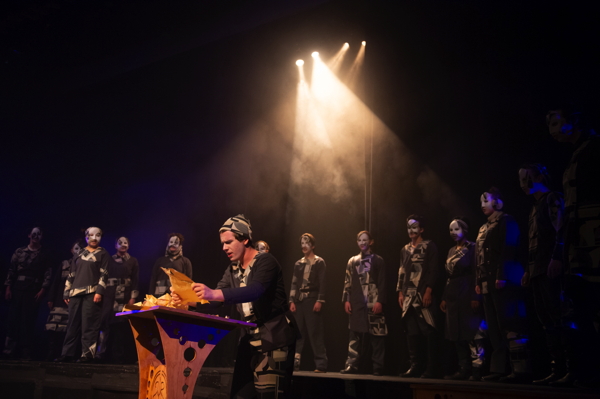 'AreUR?' at SIUE was a triumph of adaptation and collaboration

From April 24-28 2019, students and faculty at Southern Illinois University, Edwardsville, produced a fascinating, wildly collaborative, play called “AreUR?,” an adaptation of the Czech classic “R.U.R.” The original, 1921 script by Karel Capek gave us the word “robot,” and ushered in some of our first fears about artificial life taking over the world. Capek, however, lived long before AI devices resided in our phones, speakers, TVs, and cars. The students and faculty at SIUE updated Capek's script, both in content and form, to produce a clever adaptation, “AreUR?.”

“AreUR?” was created by SIUE professors Igor Crk, assistant professor of Computer Science, Erick Ruckh, associate professor of Historical Studies, and Chuck Harper, professor of performance and chair of the Department of Theater and Dance. The cast of “AreUR?” worked together with an honors course in computer science and AI, and then everyone, students and faculty, collaborated on the text and staging of the show.

The new script loosely followed the story of “R.U.R.”-a company is able to create artificial robots that will allow humanity to live in sweet luxury; humanity becomes unable to reproduce once the robots are dominant; the robots turn on their creators; but the robots in turn cannot reproduce themselves, and the single human left is forced to try to help the robots turn the factories back on; and, finally, two robots fall in love, with the implication that this new development will allow the robots to continue on, a shadow of humanity.

The new script, “AreUR?,” is divided into two acts, each with a different theatrical style. The first act is frenetic in its energy: a TED-style talk from a “bro” CEO about the benefits of their company's robots and a fast-paced game show that updates the audience on what has happened in the 10 years that the robots have been in the world. The second act's energy is far more subdued, and the tone much darker. This change in mood was extremely effective, keeping the audience on its toes. The second act was primarily ensemble-driven, creating nightmare-like stage images of the world being destroyed.

The diverse, 22-person ensemble did fantastic work together, particularly in the second act. In a section of the second act entitled, “Streams of Blood,” there was a long scene that was essentially dance depicting the massacre of humanity. Under strobe lights to harsh music, human characters tried to run and were each caught up by groups of robots, then ceremoniously killed via violent choreography. It was chilling and beautiful. It's also important to note that the cast utilized actors of many ethnicities and genders, portraying a future where these features didn't particularly matter. On a practical level, it also offered opportunities for many SIUE students to participate.

The two actors that stood out the most to me were Oliver Bacus and Kayla Bush. They played Harry Domin Rossum, the inventor of the robots, and Helena Glory, Rossum's wife who opposes the robots. Each of these young actors, students at SIUE, had to portray a large range for these characters. Bacus had to go from the confident CEO at the top of his game, to suicidal after his creation turns against humankind, and, finally, to playing a robot tenderly in love. Bush, similarly, started as a brash young protestor of the robots, to a guilt-stricken part of the destruction of humanity, to a robot also tenderly in love.

The final scene, depicting robot versions of Rossum and Glory, was also a study in the sexiness of consent. As the two robots fall in love, spelling hope for the robot's continuation, each of them asks if it's okay to touch the other: first the face, then the shoulders, each location growing in intimacy. As they answered, “Yes,” to each request to touch, the actors Bacus and Bush portrayed a rising pitch of attraction that beautifully depicted how asking for and receiving permission to touch can be seductive.

The set and lights by SIUE professor Jim Wulfsong utilized the proscenium arch of the theatre by adding two curving staircases on either end, a screen for projections, and a few levels for tables, chairs, and the like. The lights easily moved from the dramatic sales pitch of the product launch, to the bright game show blast, to the horrific strobes of the massacre, to the darkness of the post-apocolypse. The costumes by SIUE professor Laura Hanson utilized deceptively simple abstract pieces that productively portrayed the future without overdoing the concept. Likewise, the use of masks by SIUE student Amanda Jandernoa for a chorus of robots toward the end of the play was extremely effective to both differentiate characters and give a subtle nod to a Greek chorus. The original choral music by SIUE's professor from the music department, Renae Eldridge, for chorus portion of the show was also extremely effective.

This work leveraged the strengths of a university setting-collaboration between colleagues in different disciplines, the ability to rehearse for many weeks, and eager students-and came together in an experience that was special for creators and spectators. SIUE's project “AreUR?,” involving multiple departments, faculty, dozens of students, and the updating of a classic literary text, was as successful as it was ambitious.