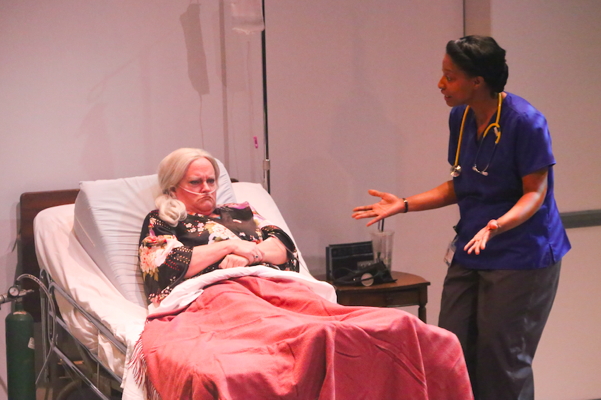 Nothing about Mustard Seed's electrifying 'Death Tax' is predictable

Through May 19, Mustard Seed Theatre is producing the St. Louis premiere of Lucas Hnath's "Death Tax." This thrilling production is full of surprises, from the script's twists and turns to the transformations of the set. Hnath's latest play, "A Doll's House, Part 2" is the most-produced script in the U.S. this season, including a production at the Repertory Theatre of St. Louis. But in Hnath's earlier script, "Death Tax," we get to see a play less inspired by the politics of Henrik Ibsen and more by the word-play and ambiguity of Edward Albee.

"Death Tax" follows Tina, a nurse at a retirement home, and her interactions with the patient Maxine. Tina and Maxine enter a partnership of sorts that puts Tina at odds with the head of the institution and Maxine's daughter. The play spins out in five quick scenes, each one with monologues from characters that feel like arias in their dramatic heights, masterful rhythms, and verbal agility. The first scene begins with Tina introducing herself to the audience, stating that the play is five scenes long. This interesting device provides a sort of clock on the action, like a bomb ticking down to the explosion in scene five.

Jeanitta Perkins completely inhabits Tina, from the Haitian accent to all the emotional twists and turns the character presents the audience. Reginald Pierre plays Tina's boss, Todd, with compelling kindness, lending a great deal of drama to the characters' final scene together. Though only in one scene, Kristen Strom as Maxine's Daughter makes an indelible impression. Strom skillfully navigates the character's complicated feelings towards her mother, showing the Daughter's rage and cruelty as proportional to the Daughter's agony and vulnerability. Finally, Kim Furlow, as Maxine, is the intense center of the play around which the characters -- and, for that matter, the set -- revolve.

Bess Moynihan's direction is incredibly strong in this piece, from the casting, to the design concept, to subtle political statements. For instance, Moynihan cast Pierre, a person of color, in the role of Nurse Tina's supervisor, Todd, a part typically given to a white actor. This creates a different dynamic between the Haitian Nurse Tina and Todd since the audience sees characters separated by nationality rather than skin color. This provides a subtle commentary on immigration and refugees. And, in a twist during the final scene, this casting choice suggests a normalized interracial family structure that, in the future, need not even be commented on.

Moynihan also utilizes the production's design elements to their greatest effects. The set by Jamie Perkins is dominated by white walls upstage with small wooden platforms on which sit furniture: a hospital bed and equipment, a desk, and plain chairs on the dirty, white, industrial linoleum floor. The concept that Moynihan utilizes so well is for the walls to move around the central place of Maxine's hospital bed. This movement creates a sense of gravity swirling around the black hole that is Maxine's rage at the dying of the light.

By and large, the stage is painted white, and the lighting by Michael Sullivan takes full advantage of this with primarily harsh, glaring industrial light. The only natural light effect is slats of sunlight as if through venetian blinds being cast on the walls or Maxine's bed. This creates the sense of being trapped, as if behind bars, and also shows how separated from the outside world the nursing home is. The costumes by Jane Sullivan similarly blend institutional scrubs with accents of the outside world. The prop designer, Morgan Fisher, added lovely details to flesh out the world, particularly in Maxine's room, such as a half-filled catheter bag. The sound design by Zoe Sullivan was most noticeable between scenes when it added to the set's movement.