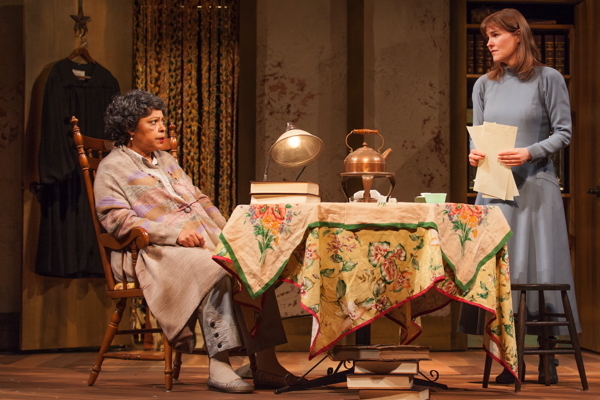 At the Humana Festival, 'Wellesley Girl' is filled with unrealized potential

One of the great things about the Humana Festival of New American Plays is the valuable exposure it gives to new playwrights. Their work is sometimes rough around the edges or even, as is the case with Brendan Pelsue's Wellesley Girl at this year's festival, a bit of a mess. But as far as artistic growth goes, there's just no substitute for the experience of seeing one's work performed by a professional company for a paying audience.

The concept behind Wellesley Girl is intriguing, especially during our fractious political season. Set in the year 2465, the play takes place in a walled enclave in New England whose 435 inhabitants are, as far as they know, the sole surviving population of the United States of America. They're all members of Congress, and the Supreme Court is now one woman -- the only one with legal training and the books to back it up.

Their stable if limited world is threatened when an army from Texas suddenly and inexplicably shows up, insisting that they are the real US government and making a list of impossible demands. The population soon splits into two camps, one insisting on negotiation and another on "scorched earth," which appears to mean abandoning the enclave and fleeing into the wilderness. Neither alternative makes much sense, though, since the invading army appears to be invincible and the water supply outside of the enclave is supposedly poisoned. Only the enclave's filtration system makes it drinkable.

This setup has the potential to offer a satirical look at our current political dysfunction and possibly an examination of how people behave when there are no good choices. Unfortunately it offers neither. The arguments among the enclave's residents become little more than shouting matches and the moral dilemma they face becomes buried in political maneuvering.

The plot also doesn't hold up to much scrutiny and much of it simply makes no sense. If the water is poisoned, what are the mighty Texas forces drinking? How did they even find out about the New Englanders in the first place, given that there appears to be no communication infrastructure? If the army has them surrounded, how will they escape to the woods?

Worse yet, the feeble final scenes seem to indicate that the playwright simply wrote himself into a corner and couldn't find a way out. When the final blackout came, nobody clapped because it wasn't clear whether or not the play had actually ended.

The show isn't without its moments. A scene in which Donna, The Supreme Court (Lynda Gravátt) hears arguments at her kitchen table with a hand-made "SCOTUS" sign in the center have real charm. And Barney O'Hanlon's robot Hank is a wonderfully precise piece of acting. Indeed, the cast as a whole is quite good, even if some of the characters they portray are a bit one-dimensional. There's also some real comedy in the public meetings before they descend into chaos. But ultimately this play's reach far exceeds its grasp.

That said, this is still an interesting first effort, for all its flaws. Mr. Plesue is clearly an original voice, and given that he is still working on his MFA, it's reasonable to assume that he might have a bright future ahead of him. Very few creative people get everything right the first time, after all.

Wellesley Girl runs through Sunday, April 10 in the Pamela Brown Auditorium at Actors Theatre of Louisville as part of the 40th Humana Festival of New American Plays.