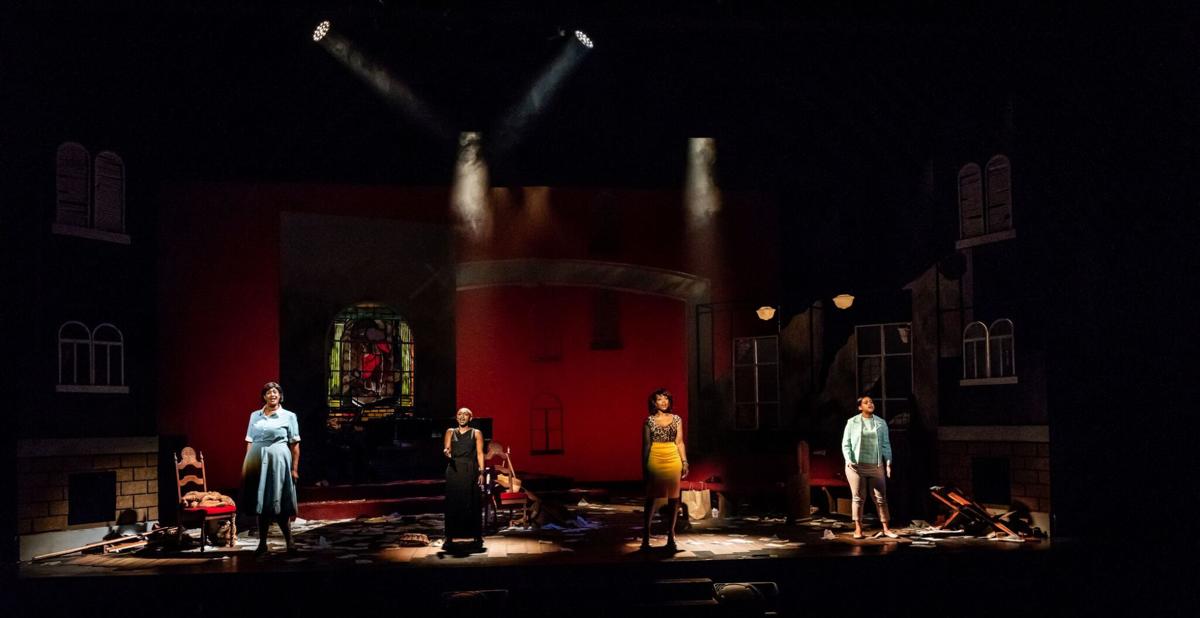 In ‘Nina Simone: Four Women’ the influential singer reflects on the state of black women in the U.S.

Director Ron Himes and The Black Rep artistic team create a magical bit of musical storytelling that tells of Nina Simone’s background and rise to fame while taking a deeper look at stereotypes of black women that persist today. “Nina Simone: Four Women” effortlessly swings between songs and history lessons that emphasize the ways these stereotypes have been used to reduce and codify black women, to minimize their contributions and significance. The four actors are each credible and powerful, and the production resonates with relatable truths.

The play with music unfolds in a nonlinear style and feels much like a memory play. Simone seems to conjure up each of the three women as she struggles to write a song. The musician usually wrote her songs in partnership but after the bombing of the 16th Street Baptist Church, in Birmingham, Alabama she wrote "Mississippi Goddam," a forceful reminder of lingering prejudice, on her own. The show is set in the ruins of the church and the grand piano she’s leaning on as she writes is the only unscathed piece on the stage. Four young girls were killed in that bombing and Simone is deeply affected by that fact.

Leah Stewart brings finesse and impeccable vocal control to her portrayal of Simone, as well as a connection to the character and causes that moved the singer. There’s real passion in her voice when she shares her thoughts on the Civil Rights movement, though she falters a bit when interacting with the other actresses. Vocally, she kicks off the show with a heartbroken rendition of “I love you Porgy” that’s deeply affecting – and each song receives a similar, thoughtful interpretation.

Denise Thimes brings gravitas and force to the role of Sarah, a domestic worker with deep reservations about getting involved with the Civil Rights movement. From a shared cultural standpoint, Thimes character is easily recognizable, but there are moments when the script smartly reminds us that people are more nuanced and realistically motivated than stereotypes. Thimes shines in “His Eye Is on the Sparrow,” and her full, rich voice could have stolen the moment, but she, Stewart and Himes choose to elevate the song as a duet instead – the result is gorgeous and show stopping.

Alex Jay is complex and sympathetic as Sephronia, the "high yellow" daughter of a white father and black mother who refuses to be a simpering victim. Jay’s voice is surprisingly soulful and resonant, and her character filled with pain and wisdom beyond her years. Camile Sharp, as Sweet Thing, keeps in lock step with Jay while expressing herself as a fiery, entrepreneurial-minded sex worker. Sharp brings a necessarily disruptive edge to her character and adds to the harmonies with a voice that effortlessly moves from the lowest to highest notes of her range. The four actors complement and contrast each other vocally and through their stories, which shine a light on harmful years of oversimplification and labeling.

Director Himes ensures the show keeps a steady, building pace that captures audience interest and, from a technical standpoint, every element supports the storytelling and “Four Women,” the closing number, reverberates with truth and grace. Tim Jones creates an environment in shambles that visually underscores the reality of the Civil Rights movement and is enhanced significantly by the special effects, lighting and sound design of Sean Savoie and Justin Schmitz. Costume designer Nikki Glaros further defines each character and choreographer Heather Beal and fight choreographer Eric Kuhn work together seamlessly to create naturalistic, but inspired songs and scenes. Finally, musical director Charles Creath ensures the songs have an intimate, immediate feel and the arrangements highlight the four talented actors’ voices.

The show is not without its flaws, however. Though each character is well motivated, there’s a bit of a lack of connection between the actors as they tell the story and there were a few moments when the action paused as an actor searched for their line. The actors are encouraged to continue working on their spoken lines and emotional connection to the material and each other. Additionally, I have mixed feelings on playwright Christina Ham’s inclusion of the gospel infused “Shout: Oh Mary” as it distracts from the more relevant “To Be Young Gifted and Black,” which genuinely feels like an anthem. Overall however, the songs create an emotional and intellectual sub-context that adds much to the production.

“Nina Simone: Four Woman,” continuing through June 2 at The Black Rep, is captivating, thought-provoking theater that honors the influential singer by looking deeper at a movement that spurred change in her. The songs are glorious, the acting effective and the show has the potential to reach new heights while shining the light on important truths from our history.