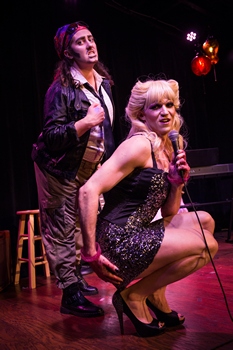 ‘Hedwig and the Angry Inch,’ touches the heart in a captivating exploration of love and identity

The Q Collective continues their inaugural season with a brilliant production of John Cameron Mitchell and Stephen Trask’s musical, based on the movie of the same title, that is both loud and bold as well as intimately personal.  Hedwig, christened as Hansel, is the gender queer songwriter and lead singer of the punk influenced band Hedwig and The Angry Inch. Born and raised in the former East Germany but now living in America, Hedwig, her backup singer and husband Yitzhak and The Angry Inch band are in the midst of a United States tour, mainly playing in dive bars and other small venues.

The band’s engagement at the Monocle just happens to coincide with rising rock star Tommy Gnosis’ sold out performances (down the street at Enterprise Center). As Hedwig chats with the audience between songs, we learn that Tommy was Hedwig’s lover and protégé until he stole her songs to launch his much more successful career. In between the band’s hard driving anthems and ballads, Hedwig also tells of her youth behind the Berlin Wall, the American soldier who fell in love with her and the surgical accident that gave rise to the angry inch. Though there are numerous tragic elements that illustrate the difficulties of living as a gender queer individual, the show is filled with genuine affection and stubborn, often angry, resiliency.

Luke Steingruby is absolutely mesmerizing as Hedwig, with an incredible voice and impressive emotional range that’s never out of control, but still intense and clearly connected to the character and story. Steingruby is perfectly complemented by Sarah Gene Dowling as Yitzhak, with a longing for Hedwig that is genuinely and visibly heartbreaking. Where Steingruby is open, baring Hedwig’s soul and songs with effectively raw honesty, Dowling’s Yitzhak keeps their feelings bottled up and harmonies tightly controlled. Skeptical but supportive, Yitzhak is clearly accustomed to Hedwig’s frequent abuse. The two create a bond that feels long-term and genuine, Dowling often looking at Steingruby with the sort of longing that comes from wanting warmth, acknowledgment and acceptance, which Steingruby’s Hedwig finally delivers in the heartfelt and touching conclusion.

The songs are catchy and hard rocking, even the ballads have a bit of an edge to them, but also surprisingly tender and always well-motivated. “The Origin of Love,” “Sugar Daddy,” and “Wicked Little Town” are forces to be reckoned with while “Wig in a Box” and “Midnight Radio” linger and caress, and I would listen to a Steingruby and Dowling cast recording again and again. The two also receive excellent support from Holly Barber and The Angry Inch Band with sharp, well-focused direction by Jordan Woods.

The choice to stage the show in the Emerald Room of the Monocle creates an immediate and realistic connection between the audience and performers. The small stage and room give the musical the feel of a cabaret, with a warm, welcoming vibe and realistic setting. Steingruby saunters, sashays and flirts through the audience with ease and comfort in gorgeous heels, costumes and wigs by Lauren Smith and the most effective lighting design, by Brian M. Ebbinghaus, that I’ve seen in the venue.

“Hedwig and the Angry Inch,” extended through June 30, is a compelling study of character and motivation with a punk-influenced sound track that thoroughly captivates. In the intimate theater at the Monocle, the show is also surprisingly personal, and Steingruby and Dowling draw a tear or two in the evocative and redemptive final scenes. Whether you’re familiar with the movie or not, the The Q Collective’s polished and beautifully staged musical is authentic storytelling that grabs you from the first note to the last.