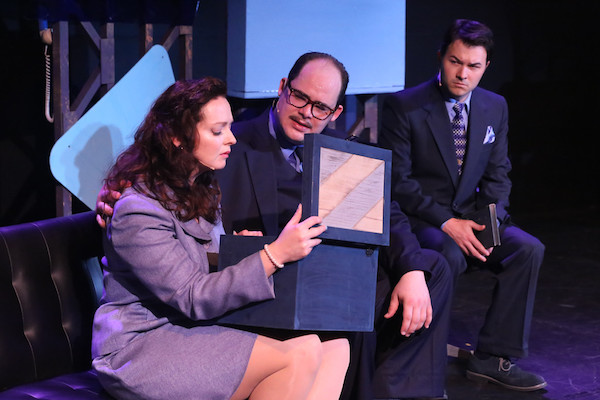 New Line Theatre sizzles with 'The Sweet Smell of Success,' a dark but appealing morality tale

Bathed in cynicism and varying shades of blue, New Line Theatre's latest musical The Sweet Smell of Success is a stunning throwback to the days of noire cinema. The cautionary tale of power, greed, and the insatiable lust for gossip and publicity that fuels the paparazzi remains relevant to this day. The story is grim, and the life or death approach of the publicists, as smartly conveyed in the opening number, appears too over-the-top to be real. Until we realize that the tragic consequences align all too well with the news.

Sidney Falco, originally Falconi, is a struggling publicist just trying to get a mention in JJ Hunsecker's column. Hunsecker is popular -- with more than sixty million readers, we are often reminded -- and has no qualms about abusing the power of his popularity to stay on top. In a life-altering coincidence, Sidney unwittingly stumbles upon JJ's half-sister Susan and her would be fiancée Dallas, a piano player in a seedy jazz club.

When JJ takes a shine to Sidney, the kid feels he's got it made. Soon he's sporting a new suit and fedora, dining at the best clubs, seeing the top shows, and gathering new clients at every turn. There's a price to be paid for JJ's interest, however. JJ Hunsecker demands loyalty and unquestioned obedience. The fact is underscored in nearly every interaction he has, but none more forcibly and uncomfortably than his relationship with his much younger sister Susan. JJ assigns Sidney the task of helping him watch and control Susan, but she sees through the ruse. The result is a tense triangle whose sharp edges can be lethal.

Zachary Allen Farmer (no relation) is near perfection as the manipulative and controlling JJ Hunsecker, bringing likeability to a man who comfortably slides down the slippery slope. His impressive baritone to tenor range enables him to play on the dark side of character with texture and nuance. Hunsecker is a genuinely power hungry and self important man with little, if any, remaining true moral conscience, yet Farmer employs a light and stylized touch that removes stern moral judgment.

Matt Pentecost is visibly conflicted as the ambitious to a fault Sidney Falco. His voice is rich and solid, with a heroic resonance, but his choices ensure he remains the anti-hero. As with Farmer and JJ, Pentecost ensures that we like Sidney, and it's always quite clear that Sidney has pangs of guilt regarding the ramifications of his actions. His final rendition of "At the Fountain" is emotionally compelling and satisfyingly expressive.

Ann Hier and Sean Michael are thoroughly watchable as lovers Susan Hunsecker and Dallas Cochran, their soprano and tenor range sweetly complementary. They light up appropriately in each other's company and their voices are clear, bright, and perfectly tuned. Sarah Porter, as Sidney's girlfriend Rita, captures the audience with a hopeful, bluesy tune, and Kent Coffel, Kimi Short, and the ensemble capably add depth to the atmospheric musical.

The technical aspects of The Sweet Smell of Success come together as strikingly on point as the cast. Rob Lippert's mid-modern set and lighting design in a blue-shaded palette is complemented by Sarah Porters period style costumes, each one finished with fabulous shoes. Directors Scott Miller, Mike Dowdy-Windsor, and musical director Jeffrey Richard Carter keep the show moving at a brisk pace. The songs are sharp and well executed as are the dances, choreographed by Taylor Pietz, referencing but not replicating the period, and luring us into the sordid story. "The Column," "I Could Get You in JJ," and "Dirt" shine among the ensemble pieces, while "I Cannot Hear the City," "Don't Know Where You Leave Off," and "At the Fountain" work nicely as ballads.

The script and lyrics are somewhat dated, with abundant sexism and, to a lesser degree, racism dolled out in an offhanded, casual manner. While the assumption that every aspiring starlet is a woman of loose morals flitting from bed-to-bed is tiring, the attitude is relevant to the story. On the other hand, the racial slurs, however slight by some standards, are easily removed without changing the tone or intention of the related lines. Additionally, Carter expertly leads the band through the moody, tense score but some modulation may improve the sound balance on a few of the songs.

The Sweet Smell of Success, running through June 24, 2017 at the Marcelle Theater, casts unflattering shadows on the underside of fame, but the musical is spectacular theater and visually gorgeous. The story is compelling and captivating, the performances are uniformly strong and harmonically on point, and attention to detail adds the finishing touch on New Line Theatre's entertaining production.