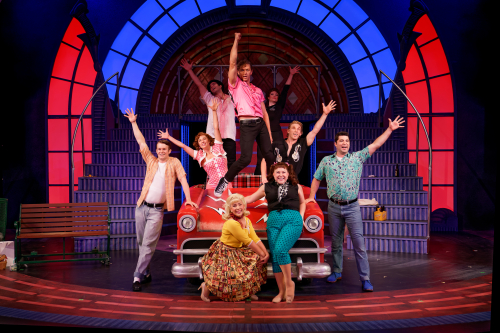 STAGES St. Louis presents the much-loved romantic comedy musical “Grease” in a spirited and infectious production. A high school musical set in the 1950s, the show doesn’t take itself too seriously as it chronicles typical teenage drama with plenty of humor and finely tuned harmonies. The musical, with book, music and lyrics by Warren Casey and Jim Jacobs, reflects attitudes drawn from the early days of rock and roll, with some recent adjustments. Though the attempts to “clean up” the book used in this production fall flat, the musical offers plenty of charms in an entertaining summer show.

Sweet and innocent Sandy Dumbrowski moves to town with her family over the summer. Almost immediately, she finds herself at the local beach and falling head over heels for a gentlemanly Danny Zuko. When fall arrives, Sandy joins the senior class at Rydell High, the local public school, where she discovers that Danny, the leader of the T-Birds, may not be the boy she fell in love with. The two clearly still have feelings for each other, but it seems unlikely that the good girl and bad boy will find an easy path to love. And they’re not the only teens feeling the pain of Cupid’s arrows. Rizzo and Kenickie, Frenchy and Doody, the other Pink Ladies and T-Birds, and all the teens at Rydell join them in the highs and lows of their search for true teen love.

Summerisa Bell Stephens and Sam Harvey are well matched as Sandy and Danny, creating believable chemistry from the first glance through the closing embrace. Stephens’ petite frame seems too small for her powerful voice and impressive control, and she deftly plays in the sweet spots of her range. Harvey is charismatic in an understated way, with a buttery voice that swings through ballads and pop rock hits. Director Michael Hamilton and choreographer Tony Gonzalez utilize the compelling couple and their friends well; building tension that stops just this side of family friendly. Their shared leads on “Summer Lovin’” are an early highlight of the show, while “Hopelessly Devoted” and “Sandy” are sweetly plaintive numbers that highlight each actor’s voice, with complementary musical direction by Lisa Campbell Albert and orchestral design by Stuart M. Elmore.

The appealing cast features stand out performances by Morgan Cowling, as the sassy and smart Rizzo, Julia Johanos as the sophisticated knockout Marty, and Jessie Corbin as the confident but not too sharp Kenickie. Steve Isom as radio personality Vince Fontaine, Lucie Moon as the plucky Frenchy, Patrick Mobley, featured in a memorable “Those Magic Moments,” as Doody and Brooke Shapiro, Frankie Thams and Zach Trimmer make the most of their time on stage and generally avoid being annoyingly clichéd. The entire cast sparkles and almost every member of the ensemble has a notable spotlight moment.

Pacing between those moments is uneven, however, and there are times when the overall energy noticeably lags. “Beauty School Dropout,” delivered with sky-high hair by a controlled, richly voiced Kendra Lynn Lucas, with comic interjections by Moon, is an applause-inducing highlight in part because it wakes the pleasant show from its reverie and puts us in the mood for the overdramatically satisfying conclusion. In contrast, “Greased Lightning” should have that same enthusiasm and pull, but the number never quite captures the energy and excitement of the moment and the choreography feels timid.

The show flows from one scene to the next with smooth, well-executed transitions that are highlighted by eye-catching design. Costumer Brad Musgroves, scenic designer James Wolk and lighting designer Sean M. Savoie add the necessary bells and whistles to ensure the show is consistently pleasing, visually and audibly. The one miss is Kinickie’s car, which is as underwhelming as the song it accompanies. The Jukebox staircase set piece is clever and functional, however, with pops of color that add to the musical’s optimistic tone and the costumes connect with the shows period and social hierarchy.

Cleaned up language doesn’t diminish the sexism, shaming and objectification that permeates the script, however, and parents should consider the suitability of the musical for younger audience members. The show centers on feelings all teens deal with, but with messages that are somewhat stereotypical of a much earlier era. Sexual innuendo is prevalent, though generally quite humorously portrayed. The cast elevates the sense of camaraderie in group numbers, but there are comments that still sting. The stakes and excitement are considerably higher in the second act, and the finish is filled with sizzle, excitement and contagious good spirits.

With universal themes, an appealing cast and catchy songs, this production of “Grease” continuing through August 18, largely overcomes its flaws. The period setting and prevailing attitudes are clearly outdated, but when taken as a nostalgic story of the past mixed with fun songs and dance along music, STAGES St. Louis’ up tempo show is a good time for audiences age 13 and older.