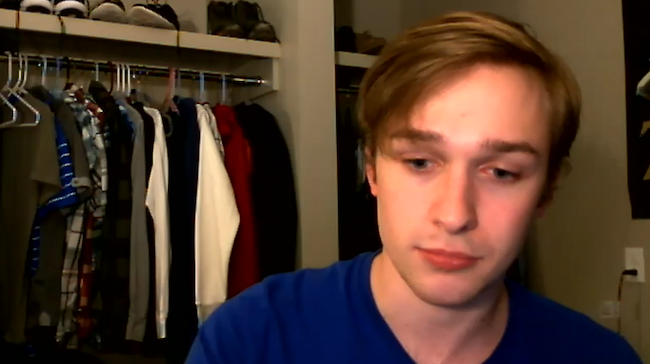 Like many other artists, fine and performing arts students have found their opportunities limited since the onset of the global pandemic. Since late spring, theater artists, musicians and other performers have increasingly turned to the popular group meeting app Zoom to reach audiences. Professor Taylor Gruenloh and the students at Missouri S&T (MS&T) in Rolla, Missouri were among the regional arts programs that looked to the app to find an audience for their semester’s work.

As the students were considering their options they hit upon the idea of a “choose your own adventure” type show, where the audience members select the next scene they watch from a limited number of choices. Unfortunately, neither the students nor Gruenloh could find a script suitable for the Zoom medium. After a few sessions with his students, Gruenloh wrote the script “Stepping Into the Phantom Punch,” a two-part show that offers distinct, but intricately related, perspectives and approaches to the same story. Gruenloh refers to the script -- its themes, characters and concept -- as collaboratively driven within the program he leads at the university. The resulting show is gripping and intriguing; for me, knowing that there are other parts of the story that exist but I haven’t seen heightens my attention to detail, adding more weight to the virtual theater experience.

The play’s action is largely driven by Tim, a college student with a younger brother who is in some sort of troublesome predicament and reaching out to him. Though he tries to convince himself that it’s probably nothing to worry about Tim is desperately looking for a ride home from one of his friends or acquaintances, even the guy he is sure hates him. Calls from his parents and a tense Facetime conversation with an ex-girlfriend reveal the situation is indeed serious and dangerous. The audience goes through several hellacious hours in the lives of Tim, his brother and friends, and their stories are not very pretty. Hope is not lost, but it certainly gets banged around as contemporary issues of exploitation, bullying, isolation and peer acceptance are layered onto the curiosity and burgeoning sexuality of these teenagers.

The play is presented in two distinct parts. Volume One delivers the plotline in a fairly chronological, character-driven story arc. Volume Two sees many of the same characters interacting with each other or delivering monologues, but these scenes delve into the emotional and psychological context of the plot. As currently presented, the audience watching Volume Two knows the outcome of the story, but just as in Volume One, they can choose which path they want to follow to get to the ending scene. The “choose your own adventure” device works fantastically, both as a clever use of the Zoom format and for Gruenloh’s tightly focused script.

MS&T does not offer a theater major, but the student performers and technicians clearly commit to the script, concept and execution of the show. The students in the leading roles, Luke Geockner as Tim, Megan Baris as Luce, Lauren Werkmeister as Crystal and Amanda Toye as Tina, create solid characters and each has one or two scenes in which they really connect. Under the watchful eye of stage manager Maddie Lechner, the technical team proves largely up to the challenge of guiding the play’s run each night. In a still evolving medium, these students are managing the timing of each scene as interdependent to the show’s flow and the successful transition for each audience member’s next scene choice. More planning for transitions, a score and backgrounds as well as the consistent use of character name labels for the audiences’ benefit will improve the delivery and storytelling aspects of the production. However, the overall effort is compelling and quite satisfactory for the format (and the use of Facetime calls as part of the dialogue structure is a particularly clever adaptation to the medium’s restrictions).

I can see other theater departments and companies focused on reaching out to vulnerable tweens and teens producing this script. Fresh eyes will undoubtedly find ways to build on the intriguingly effective use of the “choose your path” approach for virtual theater and storytelling. The script offers a number of interesting characters and the integration of graphic novel and animation culture creates artistic and interpretive opportunities that other arts programs may want to develop further.

Gruenloh and the students are to be congratulated for their willingness to embrace and then manipulate the Zoom format to create interesting and thought-provoking theater. The themes in “Stepping Into the Phantom Punch,” a live online production from the campus of MS&T in Rolla, Missouri that ran October 16 through 24, are likely to make some uncomfortable, but the stories and pain they represent are grounded in real life.