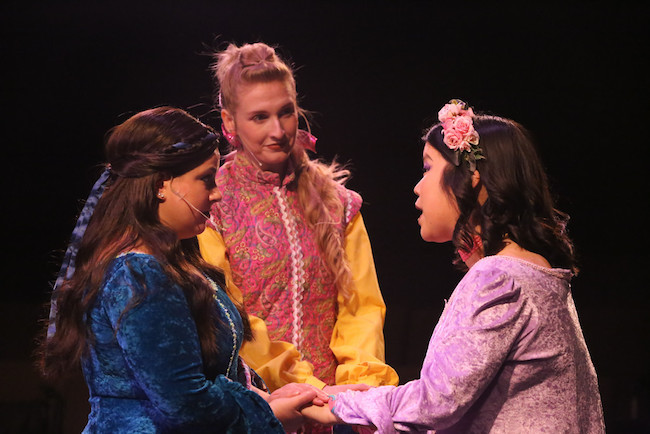 The music of pop queens The Go-Go’s is paired with a pastoral romance from the Renaissance and given a big shake of modern sensibilities in New Line Theatre’s delightful production of “Head Over Heels.”

After its original run was shortened by the pandemic, director Scott Miller and company wisely decided to remount the show for its 30th season and St. Louis theatergoers are in for a real treat. The story is familiar. A king searches for a partner for his eldest daughter; she rejects every prince who pursues her. Her younger sister realizes she loves the shepherd Musidorus, whom the king and queen view as beneath her stature. It’s one of the few things the stuck-in-a-relationship-rut couple seem to agree upon.

Add in a curious message from an oracle, an unseen threat to the crown and the country’s potential loss as caretakers of the beat, and the plot is set. The twists that make the show so watchable involve gender, sexuality and even adultery – with welcome and affirmative resolutions that are both laudable and danceable.

Grace Langford and Melissa Felps, reprising their roles as Princess Pamela and Princess Philoclea, and Dawn Schmid, joining the cast as Mopsa, are simply superb. The three carry the vocal leads with diva-like force that’s both impressively skilled and effectively funny. And the addition of Schmid proves to be the perfect counter to Langford and Felps pampered Princesses. Where one over-the-top diva might be interesting, three divas periodically bursting into sing-offs is near comic genius.

Clayton Humburg is even better his second go round as Musidorus. He seems more confident and bolder as he embodies the shepherd finding and embracing his feminine side. Colin Dowd, joining the cast as Dametas, the king’s advisor and Mopsa’s father, brings a fresh perspective and clear intentions to the role that benefit the overall production. Finally, Michelle Sauer and Sara Rae Womack’s choreography seems sharper and more in sync than remembered, which may be in part due to some strong additions in the ensemble.

Zachary Allen Farmer as King Basilius, Carrie Wenos Priesmeyer as Queen Gynecia, and Tiélere Cheatem as Pythio the oracle, are quite enjoyable in supporting roles. Farmer and Priesmeyer find different levels in their long-term relationship that cue up the final scenes while providing lots of laughs. Cheatem’s Pythio is captivating whenever they’re on stage, with charisma that emanates from the stage to the back row. The discussion of their pronouns, initiated by Basilius, challenged by Pythio and resolved by Dametas, shows how easy respect can be without being heavy handed or didactic. Finally, the chorus is top-notch and includes many lead-worthy performers.

The show, and follow me here, has a meandering, centuries hopping lineage. The original version was conceived and framed by Jeff Whitty, and is based on “The Arcadia,” published in the 1590s by Sir Philip Sidney. The original musical was adapted into the current show by James Magruder; with the music of influential 1980s band The Go-Go’s arranged by Tom Kitt. Making its Broadway debut in 2018 and originally produced by the company in March 2020, New Line Theatre’s artistic director Scott Miller directs, with original choreography by Sauer and Womack. The jumbled amalgamation begets surprisingly well-balanced story telling.

The clever script earns each laugh, from Pamela’s hilarious poems describing her ideal love to Musidorus growing comfort with his feminine side to a forewarned act of adultery by the king, with the queen, that leads to a happy ending for all. The setting in Arcadia, apparently a Mt. Olympus adjacent kingdom, also creates plenty of space for whimsy, slapstick comedy, LGBTQIA acceptance, and dance breaks that make the audience want to join in. And I am still wondering how scenic designer Rob Lippert and props master Kimi Short accomplish the falling flag magic.

The song selections are the icing, candy sprinkles and cherry on top of this surprisingly satisfying confection. The catalog of The Go-Go’s and Belinda Carlisle’s solo work lends itself to romantic entanglements that end up on the sunny side. Though they don’t always drive the show forward, each song supplements and adds texture in ways that amp up the musical’s appeal. Lesser-known numbers, like “Beautiful” and “Good Girl,” shine under a character-focused spotlight, while favorites like the titular “Head Over Heels,” “We Got the Beat,” “Vacation” and “Our Lips Our Sealed” hit new highs when paired with the show’s love-is-love friendly message. Carlisle’s solo hits “Mad About You” and “Heaven Is a Place on Earth” fit in comfortably, while the repeated refrain “Skidmarks on My Heart” is an increasingly funny exclamation point.

“Head Over Heels,” continuing through March 26 at the Marcelle Theater in the Grand Center Arts District, thoroughly entertains. The themes and story are charmingly comic and completely relevant. The book’s light touch ensures its messages about love and acceptance are easy to embrace, even in flyover country. Miller’s engaging direction keeps the musical comedy upbeat and the audience involved through both uncertain and declarative moments. Most importantly, exceptional performances have the audience cheering for the characters and for love to conquer all while the infectious songs of The Go-Go’s perfectly hit the mark.