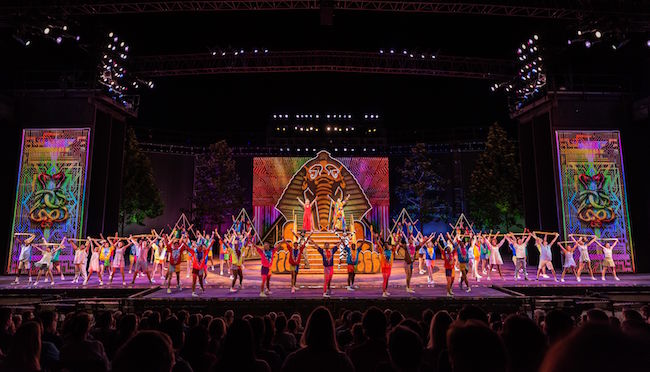 'Joseph and the Amazing Technicolor Dreamcoat' at the Muny: A brightly colored, all-ages musical party

The 104th season of the venerable Muny theater comes to a close with the optimistic and uplifting “Joseph and the Amazing Technicolor Dreamcoat.” The family friendly show, filled with positive affirmations and lessons on perseverance, faith and forgiveness is a spectacular and entertaining finale for the season.

One of the earliest collaboration between Tim Rice and Andrew Lloyd Webber, “Joseph and the Amazing Technicolor Dreamcoat,” was first conceived as a short piece for children. Over the course of a few short years, the idea grew from a handful of songs to accompany a familiar story into a successful Broadway show that signaled the arrival of a legendary pairing. The Muny’s excellent production shows just how far any dream can go with the right cast and artistic team.

Joseph, the youngest of Jacob’s twelve sons, has the gift of prophecy and the misfortune of being his father’s favorite child. Joseph dreams don’t sit well with his siblings and, when dad gives Joseph the famous and fabulous coat of many colors, their jealousy boils over. The brothers initially plot to kill Joseph, fate intervenes and the brothers sell him into slavery instead. A series of adventures and visions later and Joseph finds himself seated beside the Pharaoh and in a position to seek revenge on his brothers. How will he respond?

The Muny’s brightly colored production is fresh and thoroughly entertaining with starts Jessica Vosk, as the Narrator, and Jason Gotay, as Joseph, leading the way. Vosk is a vocal powerhouse, eliciting enthusiastic applause from the audience for long runs and sustained notes that are true and clear. She also exudes warmth and a knack for storytelling that plays from the first row to the back of the house. Gotay has a smooth, warm baritone and an impressive range of his own. His Joseph is charismatic and sympathetic, with a youthful eagerness that perfectly suits the character.

Whether by intention as a way of getting comfortable working together or just for the love of music, “Joseph and the Amazing Technicolor Dreamcoat” is a love letter of a musical. Rice and Webber embrace and exult a variety of musical styles, and every song gets just the right treatment, lyrically, musically, and emotionally. There’s a little vaudeville, some soft shoe shuffling and carnival barking as well as a great big over-the-top tap number. The show doesn’t stop there, though, sprinkling in a few tender ballads and proving it’s also a little bit country and a little bit rock and roll. While the approach could result in a chaotic mess, the artistic staff and performers at the Muny expertly bring the vision of the authors to life in an energetic, uplifting production.

“Jacob & Sons,” draws everyone into the story with its pop-influenced chorus and keeps everyone enthralled with hit after hit song receiving new perfect execution. “One More Angel in Heave/Hoedown” is great fun, even if untrue. “Potiphar” gets the whole audience toe tapping and “Go, Go, Go Joseph” pulls them out of their seats. The fun and the aural references to different genres continues in Act 2 with “Song of the King,” “Those Canaan Days,” and “Benjamin’s Calypso,” while “Who’s the Thief” offers a hint of the edge to come in future Rice and Webber collaborations. Finally, the inspiring, can do spirit of “Any Dream Will Do” captures the heart and soul of the joyful production as easily as it sticks in your memory. You’ll likely find yourself humming these tunes from now to the first show of next season.

The story of “Joseph and the Amazing Technicolor Dreamcoat,” continuing through August 18, unfolds in a straightforward manner that sticks to its biblical roots while offering a little something for every musical taste. Rice and Webber avoid embellishment or exaggeration with the plot and it serves the story well. There are plenty of twists and turns in the original story and the songs are where the duo make their mark. To distill it to the simplest point, the pair kicked off their partnership by paying tribute to all the styles that have influenced Broadway musicals over the years, and the approach is simply fantastic. The Muny’s family friendly production pays tribute to the duo with an abundance of fresh energy and attitude and spectacular performances that bring the audience to their feet time and again.