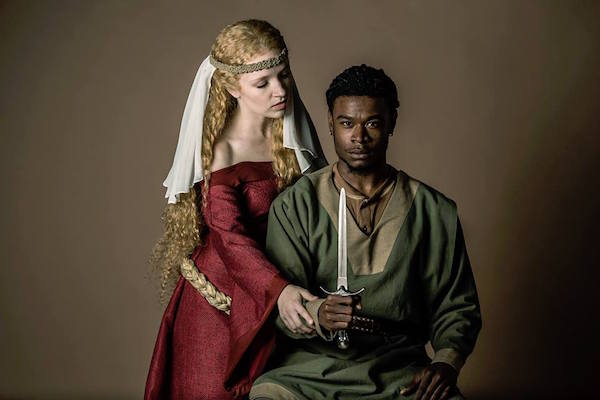 'Macbeth' does justice to Shakespeare at the Webster Conservatory

I've always said that college theatre gives you the very best bang for your theater buck, and once again Webster Conservatory has resoundingly proved me right. Their production of Macbeth is superb. Actors, designers, builders, craftsmen and crew are all students. Director Bruce Longworth has brilliantly led them into the creation of a remarkable and exciting evening.

We find ourselves awed by four great rough-hewn megaliths standing behind an ancient stone circle. Designer Robbie Ashurst approaches genius in the use of these scenic elements. By themselves they ache of ancient Britain. At first they are subtly decorated by narrow vertical drizzles of runes -- not unlike the droppings of some evil bird. But when a shift of lighting brings out hints of primitive faces on the stones -- as the runes evaporate -- the magic of these stones begins. As we venture into this dark evening these great stones, from time to time, glow with projections: the graceful text of Macbeth's letter to his wife, the noble faces of the future kings descendant from Banquo. When the tragic confusion of the elements is at its highest we are given a huge blood-tinged solar eclipse! Most impressive!

Lighting, by Josh Murphy, and sound by Marion Ayers are equally excellent. The opening battlefield scene surmounts the difficulty of presenting convincing swordplay by being staged in slow motion, with a kind of stop-action use of strobe lights. There are great storms and lightning, there's lovely -- and sometimes ominous -- music. Magically the black sky is filled with a thousand candles. But all the impressive technical aspects never quite cross that line that marks the boundary between a play about people and a play about high-tech effects. It's all very fine work.

This is a very classic production of Macbeth. No "concept," no shifting of time or place. Yes, several roles written for men are given to women, but this is quite appropriate in a training environment like the Conservatory, which has obligations not only to the audience but to the students as well. There just ain't that many roles for women in Shakespeare. (Many of England's great actresses cut their teeth in men's roles in girls-school productions of Shakespeare; Sarah Bernhardt played Hamlet, and Glenda Jackson is soon to appear as King Lear.) In this Macbeth, Malcolm, the king's son, is played by Austen Danielle Bohmer. She does a beautiful job. A woman in this role offers no difficulty, as Malcolm is indeed a beardless youth. The nobleman Lennox is also played by a woman -- Natalie Walker.  Tall and with a wonderfully expressive face she's full of masculine ardor and she moves to battle with the most commanding stride of anyone on stage.

The three witches do lovely wicked work, with strange incantations and a very strange sort of dance. Their brewing of the "toil and trouble" involves their pouring nasty buckets full of red, green and black slime down a grating in the floor -- a nice directorial touch. But despite their weirdness and rags they still appeared as attractive young women. I wanted a bit more grotesqueness -- a bit of hagginess, a hint of beard.

What a charming twist it was, when the murderers are brought in to talk with Macbeth, to have one of them almost giddy with awe at the fittings of this royal room. In another delicious bit director Longworth puts the prophesies not into the witches' mouths but into Macbeth's -- with actor Myke Andrews mouthing the words to recordings of other voices. Spooky!

Matthew Brent Luyber (who played the delightful Stephano in last year's Tempest) gives a gem of a comic performance as the drunken porter. He's a hoot! And all of the student actors do excellent work. There's not a weak spot in the entire cast. And, as usual, the diction is splendid.

Now, as to the tragic lord and lady. Both Myke Andrews and Sigrid Wise do excellent work. And this gave rise to a tiny marital discord: my wife raved about Andrews, his diction, his deep understanding of the lines. Well, yes, that's all true. But I thought that Miss Wise was just a pinch more fine. Similar owning of lines, similar fine diction, but with a gift for graceful, powerful dramatic movement. Her "unsex me here" speech was spine-chilling, and she gives us a shocking moment when she is clearly going mad.

All in all it's another very fine production. It's Macbeth at the Webster Conservatory. It plays through November 20.