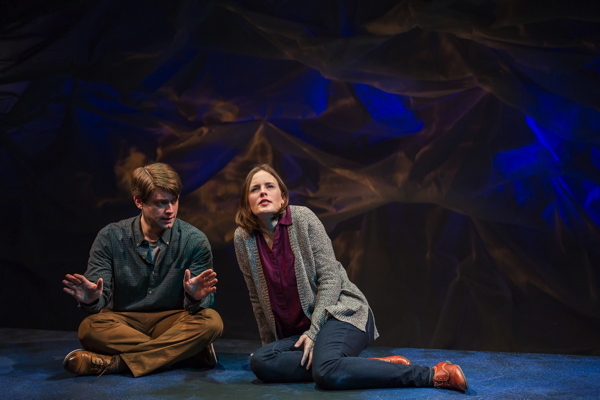 The road not taken; where does it lead? If this or that tiny aspect of my life changed, what would the result be? That's the question at the heart of British playwright Nick Payne's ingenious but less than compelling comedy/drama Constellations, getting its local premiere at the Rep Studio through February 5.

It's not exactly a new question, of course. It's the basic premise behind theatrical vehicles as diverse as the 2014 musical If/Then and the 1921 play If by Lord Dunsany, to say nothing of numerous films and science fiction novels. Mr. Payne's take on it is somewhat innovative, though, in that he puts it in the context of the quantum physics concept of the "multiverse" -- the idea that there is an effectively infinite number of different universes in which every possible permutation of every possible human decision and/or physical event exists.

In Constellations, the case for the multiverse is first made by Marianne, a cosmologist who links up (or doesn't) with beekeeper Roland at a cookout. The script gives us a half-dozen different variations of the scene, all slightly altered in tone and text, and then spins out permutations of the relationship between the two characters. Breakups and infidelity are involved, and marriage might be. There's also an illness for Marianne that is, in all but one version, fatal. Essentially, the play boils down to a handful of scenes repeated with variations so minor that they might as well be identical.

It's a clever and unorthodox structure. It's also the play's greatest weakness.

In an essay quoted in director Steve Woolf's program notes, Dr. Liliane Campos -- a professor of Performing Arts, Literary Theory and English Literature at the Sorbonne -- notes that in Constellations, Mr. Payne "creates a space for the spectator's active gaze, inviting us to group his fragments together and to find new meanings in the constellation they produce." Unfortunately, the repetitive nature of those fragments means that the characters never are allowed to take on any real depth, so there's not that much meaning to work with. In the final analysis, Constellations feels like an intricate piece of dramaturgical clockwork, fascinating to watch but not very engaging, somewhat like Michael Frayn's Copenhagen, but without the intellectual or dramatic depth.

Fortunately, the Rep has a wonderfully talented pair of actors to carry the burden of what strikes me as a very challenging script from the performer's point of view. As Marianne and Roland, Ellen Adair and Eric Gilde (who are married in real life) navigate all the twists, turns, and switchbacks of Mr. Payne's multiverse with impressive skill. The often-subtle differences among the scenes require performers with good ears for verbal nuance and a finely tuned feel of body language, which Ms. Adair and Mr. Gilde have in abundance.

The director's job calls for a similar level of subtlety, and Steve Woolf is up to that challenge as well. His well-considered blocking and pacing serve Mr. Payne's script very well and make the best possible case for it.

Constellations strikes me as a good idea that needs some work. Personally, I would have appreciated fewer scenes with more depth, so I could get to know the characters better. As the play stands now, it's hard to summon up much empathy. I would also have welcomed a more thorough exploration of the intellectual concepts behind the show. As it is, they're thrown out in the early scenes and never mentioned again.

It's always good to see new works, of course, and the Rep studio has an enviable track record of bringing worthwhile new scripts to the attention of local audiences. Performances of The Repertory Theatre of St. Louis production of Constellations continue through February 5 in the studio theatre of the Loretto-Hilton Center on the Webster University campus.