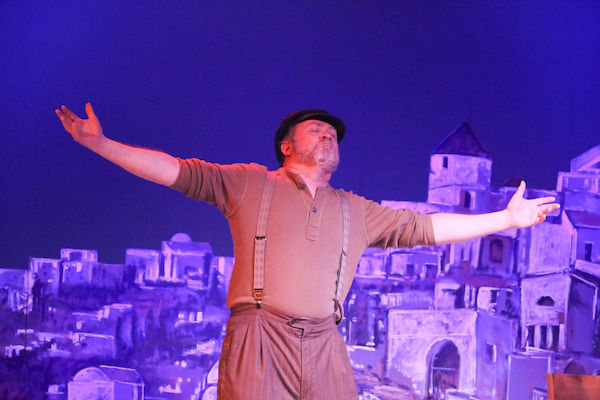 On the shores of a Greek island, 'Zorba' celebrates the bittersweet journey of life and love

Filled with passion and genuine exuberance, Zorba is the most beautifully hopeful tragedy I've seen in quite some time. The score and dancing are evocative, drenched with the sounds of Greek folk music. The lyrics are filled with exposition and storytelling reminiscent of the classics. The musical tackles the story of humanity as told through the eyes of an aging man determined to squeeze every last ounce from his own life. Tragic in nature, because we all must die at some point, the tale is nonetheless spirited and filled with love and passion.

Zorba, an aging Greek man with a lust for life and a careless way with other people's hearts and money, is constantly looking for his next adventure. When he meets Nikos, an American who recently inherited a mine on one of the islands, he quickly latches on to the uncertain businessman. The two are soon busy trying to revive the shuttered mine with the help of the locals, who are hoping for employment once the mine is operating. Along the way, they encounter romance, heartbreak, and a business trip by Zorba that nearly bankrupts the young man.

Zorba, played with a full voice and a touch of sobriety by Kent Coffel, is charming and filled with practical, earthy wisdom. Seemingly cavalier, he speaks from the perspective of age and experience, choosing to live his life in the moment. Coffel sparkles with good humor and a teasing, gregarious nature. Though he shows a hardening of heart when challenged to feel beyond the here and now, his final goodbye with Madame Hortense is emotional and comforting.

Dominic Dowdy-Windsor as Nikos, the American Zorba takes under his wing, counters Coffel with a curious, cautious nature. Nikos is bookish and inexperienced in life and romance, and Coffel and Windsor-Dowdy complement each other well. Dowdy-Windsor has a rich, pleasing voice and is wonderfully naïve as the studious American. His budding romance with the Widow is as sweetly innocent as it is tragic.

Margeau Steinau is thoroughly delightful as Madame Hortense, Zorba's latest infatuation. She flirts and plays a coquettish innkeeper with a vivacious laugh and easy nature that suits Coffel's Zorba well. Ann Hier is heartbreaking and sympathetic as the Widow. The lessons she teaches are gracefully portrayed and her strong singing adds sincerity to the mistreated character. Lindsey Jones is playful but persistent as the all-seeing and all-knowing chorus Leader. She commands attention with her powerful voice, pointed gestures, and expressions, always pushing the story forward.

The ensemble delivers well-constructed harmonies and Greek influenced choreography that fills in the story. Evan Fornachon is delirious with unrequited love, Devin Riley a good-natured and likeable Mimiko, and the supporting cast, including Mara Bollini, Sarah Dowling, Robert Doyle, William Pendergast, Kimi Short, and Sara Rae Womack, are fully invested in the show and the vision of directors Scott Miller and Mike Dowdy-Windsor.

The band, led by conductor Sarah Nelson, skillfully weaves the Broadway melodies and Greek music together, creating a pastiche that fills the theater with the sense of the islands. Choreographer Michelle Sauer demonstrates firm knowledge of Greek folk dancing, and the ensemble executes even the more intricate and challenging steps with confidence. Rob Lippert's gorgeous set design is detailed, warm, and inviting; it just may have you planning a vacation to the Greek islands as you wait for the curtain to rise.

Sarah Porter takes a slight misstep with the Leader in an otherwise smartly costumed show. The all black choice creates some confusion with the Widow, but it is the black wig Jones wears that stands out for the wrong reasons. A decoration or brightly colored veil may help integrate the hairpiece, and it's unfortunate because the rest of the costumes so nicely depict the working class townspeople and their "wealthy" guests from France and America. And those crows hats are spectacular. Beautifully constructed and moody, I'm considering approaching Porter to see if she'll offer them for sale when the show closes.

There's a lot of artifice to the story and show, and it works well to showcase the highly stylized influence of Greece, its dances, customs, and storytelling traditions. The same artifice also reminds audiences that this is a story from a markedly different time and place. This is important because, honestly, there are a lot of stereotypes and more than a little chauvinism in the show, which may make some patrons uncomfortable though the overall tone is life affirming and bittersweet.

Some of the ideas and stereotypes are incongruous with contemporary thought and an audience must be able to allow this inconsistency. Thankfully, New Line Theatre has produced a deeply satisfying and effective show that resonates with hope. Zorba, running through March 25, 2017, is a compelling story. The performances are sharply executed and endearing, and, though the ending is sad, it is filled with joy and gratitude.