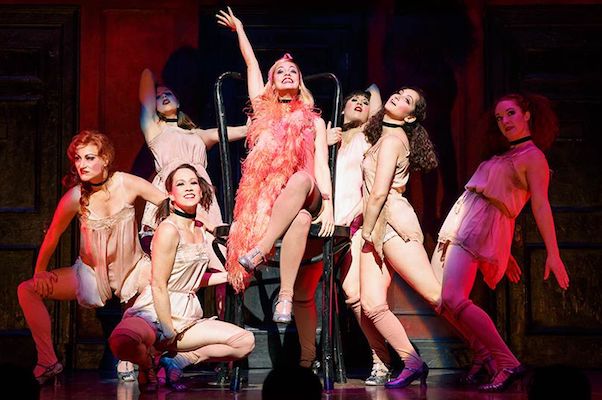 Dark and sensual, the Roundabout version of Cabaret now playing at the Fabulous Fox theatre is the most openly suggestive and insidiously sinister of the three versions of the popular musical. The current production is tense, exciting, and satisfying. The emotional turmoil and increasingly authoritarian government propels the show from bawdy and libertine to fearful and persecuted with such ease, the ending startles the audience even though we know what is coming.

Set in Berlin, Germany, the show opens on the last day of 1929 and continues through several months of 1930. It's an important historical period, and we see the changing attitude of the German people and the corresponding and devastating effect the influence and rise of the Nazi party had on artists, performers, and homosexuals, as well as the Jewish citizens targeted by the regime.

Clifford Bradshaw, a struggling American writer looking for inspiration, meets the German Ernst Ludwig on a train to Berlin after inadvertently helping the other man smuggle a briefcase across the border. Cliff accepts his new friend's recommendation on a boarding house run by Fraulein Schneider, a mature woman courted by Herr Schultz, the Jewish proprietor of a fruit stand. Cliff also takes Ludwig's advice and visits the Kit Kat Klub, where he meets the irrepressible Sally Bowles and bumps into an old flame, Bobby. The club, their lives, an unplanned pregnancy, and the encroaching power of the Nazis soon intersect in a memorable show.

Leigh Ann Larkin and Benjamin Eakeley are compelling as the imperfect hedonist Sally Bowles and her solid, perceptive, and openly bisexual lover Clifford Bradshaw. Larkin is insouciant and coy, with a voice that, whether by direction or nature, belies the character's insecurity while still remaining pleasant. Eakeley counters with a smooth tone and graceful carriage. Observant by nature, his responses show he can't avoid taking a side as Berlin changes around him.

Patrick Vaill handles the sharp turns of Ludwig well; Mary Gordon Murray and Scott Robertson are kind and heartbreaking as Fraulein Schneider and Herr Schultz; and Alison Ewing and Joey Khoury stand out among a strong supporting cast. The story is compelling, but it's at the Kit Kat Klub where the action really heats up. And here, Jon Peterson captivates as the Emcee, always teasing the audience as he deftly moves from showman to omnipresent force to prisoner.

Beguiling and gregarious, Peterson purrs and bounds through the show's opening numbers, sparkling in the light and reveling in naughty double entendres and flirtation. The Emcee's shine and enthusiasm waivers as the new political movement's power grows, until he stands alone, his truth fully exposed in a searing spotlight. Peterson uses all of his tools: expression, posture, movement, costume, and gestures with finesse, transitioning emotionally, vocally, and physically as the show closes in on the club. An omnipresent force, he keeps his intentions secret and his exclamations lascivious.

This version of Cabaret is darker, dirtier, and more starkly realistic. The presence and increasing control of the Nazi party is never far from mind, and increasingly vocal. The scantily clad, suggestive Kit Kat Klub, Sally Bowles' promiscuity, and Clifford Bradshaw's bisexuality are played for maximum effect, but there's humanity and grace to be found in all that bumping and grinding.

The high-energy production is visceral, filled with catchy, familiar songs, as well as sensual and increasingly aggressive choreography. The favorite numbers from the show are all executed with a fresh energy and interpretation. "Willkommen," "Don't Tell Mama," "Two Ladies," and "If You Could See Her" are bright and humorous, while "It Couldn't Please Me More," "I Don't Care Much," and "Cabaret" are deeply emotional and effective. The songs reflect the dichotomy at the core of the sharply written show.

The script is perceptively biting, filled with commentary that's expressed in dominant movements, sharply hissed whispers, singular acts of rebellion, and increasing fear. This production, under the direction of BT McNicholl, hits all the right notes, in the right cadence, letting the layered and nuanced story unravel under the bright lights and tattered costumes.

Cabaret, playing through Sunday, March 19, 2017 at the Fabulous Fox Theatre, is bristling with energy that vividly captures the period and delivers a transcendent message on the dangers of political might. Richly engaging, with tender moments, risqué comedy, bold choreography, and a startling conclusion, Cabaret delivers its cautionary tale in a dazzling package that's a treat to the senses.