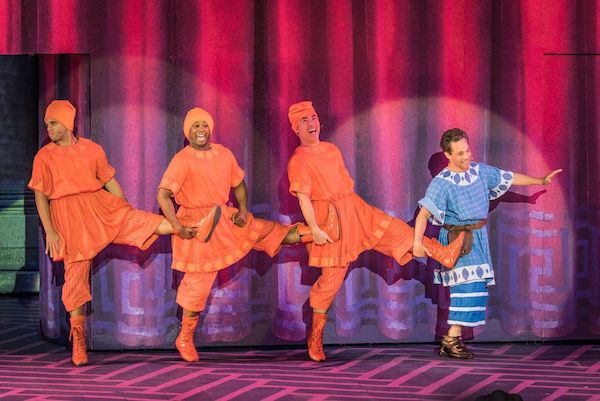 Filled with suggestion, scheming, and comeuppance, A Funny Thing Happened on the Way to the Forum tells how the slave Pseudolus earns his freedom from Hero, the son of Senex, by helping him win the heart of the lovely Philia, who is currently betrothed to her brother (though the two have never met and don't know they're related). That's a lot to take in, but the show focuses on conveying the story as well as the song, dance, and funny parts. Expertly telegraphing themes and weaving in silly moments, director Gary Griffin keeps the touch appropriately light, with a wry tone that's perfect for the loose and bawdy musical.

Debuting 55 years ago, the musical comedy is loosely based on the plays of Plautus, written around 200 B.C., with lyrics and music by Stephen Sondheim and a book by Burt Shevelove and Larry Gelbart. The show kicks off at a merry pace and keeps the laughter rolling from the opening number through mistaken identity and outrageous schemes to the prerequisite happy ending.

Though some of the attitudes are decidedly outdated, the musical entertains contemporary audiences with its clever take on traditional archetypes and over-the-top portrayals that emphasize the humor in every outrageous moment. Throw in a couple of running gags involving neighbors Lycus and Erronius, one a brothel owner, the other desperately seeking his kidnapped children. Shake well, and you've got the recipe for a frothy comic farce that successfully mixes Broadway, vaudeville, and ancient history.

If you haven't heard, a theatrical plot twist put The Muny's production in peril. Severe allergies, an all-too-common malady for many locals, forced lead actor Peter Scolari to step away from the part just four days before opening night. Thankfully, Jeffrey Schechter (Scuttle from the delightful, family-oriented The Little Mermaid) agreed to step in and fill the role of Pseudolus. The audience on opening night responded graciously to the actor's genuinely funny and endearing portrayal.

As Pseudolus, Schechter impressively fills in for the ailing Scolari and, with the exception of a well timed ad lib, it's easy to forget that he joined the cast just a few days before A Funny Thing Happened on the Way to the Forum opened. Schechter has great physical presence and a demeanor as suitable to the character as his fabulous timing. He revels in the differences between exposition and innuendo, with an earnest, pleasant voice that suits the role. A testament to the ensemble, director Griffin, and Schechter, it all works to ensure it truly is easy to forget the script he holds in his hand at times.

Schechter is joined by an amiable and capable ensemble, featuring Mark Linn-Baker, who brings a touch of everyman charm to the philandering Senex. E. Faye Butler is full voiced and fierce as the shrewish Domina. Her interplay with Linn-Baker and Marrick Smith, as her son Hero, is humorously overbearing and she expertly commands the stage. John Tartaglia is the perfect counter to Schechter as number one household slave Hysterium. His expressions are easy to read, but never clownish, and you can't help but keep an eye on him. Clearly comfortable playing against each other, Schechter and Tartaglia are a delightfully comic treat that tops off the humorous show.

Smith's Hero and Ali Ewoldt's Philia complement each other vocally and in character tone and attitude. She's decidedly under-educated, he's most certainly naïve, and everything works out to their advantage, even with Nathaniel Hackmann, who struts and huffs as the preening Miles Gloriosus. The always engaging Jason Kravits and local favorite Whit Reichert continuously pop in and out of scenes to humorous effect and the increasing laughter and applause of the audience; and the Proteans are perhaps the funniest live-action interpretation of "minions" that I've seen to date.

The musical comedy fits the genre to a tee, and the light farce is fun, fast-paced, and filled with silly but engaging characters in a transparent, but nonetheless satisfying, story arc. The feel-good script is complemented with upbeat, positive songs, skillfully directed by Brad Haak and delivered with a bright, crisp tone that clips along at a steady beat. Choreographer Alex Sanchez maximizes the comic opportunities and Mara Blumenfield and John Metzner have fun inside the lines with the referential costumes.

Even with a last minute change in the leading role, The Muny's production of A Funny Thing Happened on the Way to the Forum, running through July 11, 2017, is a laugh-packed farce and terrific entertainment, with a couple of memorable songs that may have you humming for days to come. Schechter fills in impressively for the ailing Scolari and the ensemble clearly rallies behind him, adding extra charm and lifting the show a notch. Suitable for the entire family, with humor that hits all the right spots, the show is a perfect distraction for a hot summer night.