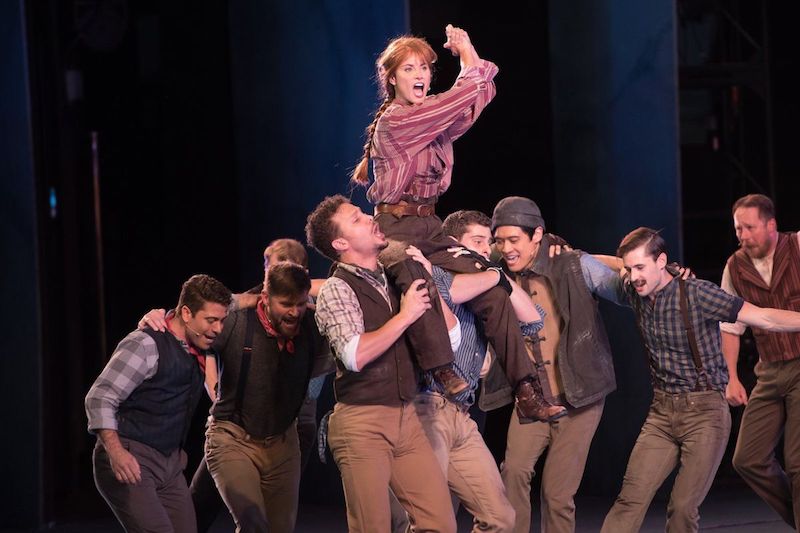 Truth is often not only stranger than fiction, but more fantastic and interesting as well. Such is the case with the irrepressibly upbeat and historically fact-based musical The Unsinkable Molly Brown. A beguiling and exuberant Beth Malone brings Hannibal Missouri's second most famous citizen, the infamous Molly Brown, to life in a lively, uplifting performance. With a revised script and refreshed score, as well as a strong ensemble, the musical may also be this season's surprise hit at The Muny!

Poor and uneducated, Molly was driven to make something of her life. After making her way from Hannibal to Leadville, Colorado, mostly on foot, she learns to read, captures the heart of miner JJ Brown, reinvents herself as a society member with an eye to politics, and famously survives the sinking of the Titanic. Always outspoken, Malone ensures Molly never loses her connection to her roots and her homespun wisdom adds much to the show's inherent humor without ever belittling the character. Malone is absolutely infectious as Molly and convincingly carries the show; there was a significant storm on the night I attended but, even after an hour and a half delay, there was no drop in energy or commitment to her performance.

Malone is joined by an outstanding cast that features Marc Kudisch as JJ Brown, Justin Guarini, Paolo Montalban, David Abeles, and Mike Schwitter as miners and friends, and Whitney Bashor as Julia, the widow of one of the miners who teaches Molly to read and write. Kudisch and Malone pair up well, a gold rush Beatrice and Benedict with witty repartee and chemistry that reads to the very back of the amphitheater. The men harmonize like a prize-winning barbershop quintet on several numbers, and the ensemble pieces are layered with interesting arrangements and a few surprising runs. The emotional context and camaraderie between the cast members adds to the feel-good tone of the show, and, though they never distract from the primary story, I could listen to Guarini and Bashor sing duets all night long.

The entire show is honestly engaging, and the storytelling focus of the revision is compelling; there's simply never a lag in the action. Several of the numbers stand out both for their musicality and social commentary, particularly Molly's thematic "I Ain't Down Yet" and "Share the Luck." My favorite piece of the musical, however, is "Belly Up to the Bar, Boys," which references Aaron Copland and Agnes De Mille in a way that feels fresh and contemporary. The song is one of the longer numbers in the show, but it is so visually and musically stunning that I would be perfectly content if it continued for another five minutes.

The updated musical includes "new" songs by Meredith Willson and a significantly rewritten book by Dick Scanlan that removes much of the hyperbole and exaggeration of the original script. The effect is immediate and positive. The additional songs, selected from the Meredith Willson catalog, complement the story changes while maintaining the songwriter's tone and style. The script revisions demonstrate that Molly Brown clearly had a full, adventurous, and noteworthy life that doesn't need enhancement -- and the show gains a lot of charm and good-natured sensibility when her actual history is the focus.

Musical director and arranger Michael Rafter ensures that each number sounds just right, and even the incidental music adds context and a bright undertone to the quick moving show. Director and choreographer Kathleen Marshall embraces the new version, directing our attention to the character relationships rather than the larger-than-life mythology and creating a visually pleasing piece that seamlessly moves along the story arc. Scenic designers Derek McLane and Paul Tate dePoo III based their set on McLane's original designs and the choice to keep the set pieces relatively simple and minimal is smart. Paul Tazewell's costume designs effectively communicate status and Molly's dream "red silk dress" evolves in ways that subtly reinforce her growing wealth and social position. All these little details add up to a delightful show.

The combination of a new script, fresh dances and music, and a truly engaged and enthusiastic ensemble, led by a stellar performance from Malone, ensures that The Unsinkable Molly Brown, running through July 27, 2017 at The Muny in Forest Park, does a lot more than merely stay afloat.