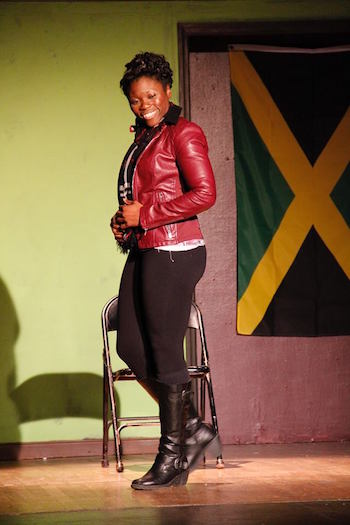 Independent Theater Company’s current production, Random, by debbie tucker green, is an effectively personal and emotional one-woman show that examines the impact of random violence. In the show, we’re introduced to an immigrant family living in London. The father and mother are hard-working, honest people, but they are not entirely familiar or comfortable in their new environment. The sister and her younger brother have adjusted quickly, the traces of their homeland are less apparent and they move freely and with confidence from home to school, work, and everywhere in between.

Mother and sister arise with their alarms, albeit a bit slowly, while brother rolls over, ignoring both the clock and his mother’s encouragement that he get going. Brother and sister squabble over phone chargers and data use, but it’s clear that this is a regular conversation, more habit than anger or emotion. The father is a quiet man, he takes his time to respond while mother stays busy making breakfast, planning dinner, and ensuring her children are fed and out of the house on time. This is just another morning but, by late that afternoon, after one of the children is brutally murdered in a random knife attack, the day and the family will never be the same.

Patience Davis quickly establishes not only the four family members, but also the sense of their normal routine. The mother and daughter have a bright tone, and similar but different rhythms, mother’s voice is more heavily accented, her shoulders and head stooped a little forward after a lifetime of service. The daughter is energetic, a little impatient and quick to dismiss her brother and coworkers’ follies, she moves with certainty, her head high and her shoulders back. The father doesn’t say much, but his presence and authority is felt, while the brother is a typical teenage boy. He wants to sleep, doesn’t need his mother’s reminders, and pushes boundaries whenever he can, including showing up to school late. He walks with a bit of a swagger, thrusting his hands in his pockets and cocking his head to one side.

Random opens with the sensibility and pacing of a normal day then almost imperceptibly but definitively shifts, creating the sense of time suspended that seems to envelope tragedy. Questions are repeated, details forgotten and then remembered and questioned once again. Davis skillfully and purposefully transitions between the characters, creating a barely noticed beat as she adjusts her posture and lowers or raises the zipper of her jacket to signify the various family members. Her conceit works well without slowing the story, though there are a few transitions where it took an extra moment for the audience to discern the character change. This happens primarily at the top of the show, once each family member is introduced it’s easier to follow the changes.

The parents have always warned the children to be careful and mind the police. Father admonishes them to never shame the family by having the police show up at the house, while mother advises, “never trouble trouble until trouble troubles you.” When the police do knock at the family’s front door, the parents are hesitant to answer, slowing the delivery of the heartbreaking truth until the remaining child can get home. The shock to the entire family is palpable, even when conveyed by a single actor the emotions and disbelief hitting one family member then the next. Father and child go to identify the dead sibling; mother stays home then incessantly asks if the others are certain it was her child they saw.

Director Britteny Henry ensures Davis remains focused and her characters individual and distinct. Together, the two vary the emotional pacing, replicating the natural ebb and flow between disbelief and grief that so often accompanies unexpected tragedy. As with most one-person plays, a simple set is the perfect complement to a story that depends on the actor’s ability to transform herself into multiple persons. Davis successfully expresses the unique reaction of each family member to the heinous crime, sympathetically communicating the ripples of pain and despair that a single random act of violence spreads.

Unfortunately, the Independent Theater Company’s production of Random received just two public performances, closing on November 18. The script is compelling and relevant, particularly in a melting pot city that sees its fair share of violent and random crime, like St. Louis. Davis turns in a strong performance, filled with ticks and nuance that bring the family to life, and Henry directs with clear vision, ensuring that the company and its future productions will remain on this critic’s radar.