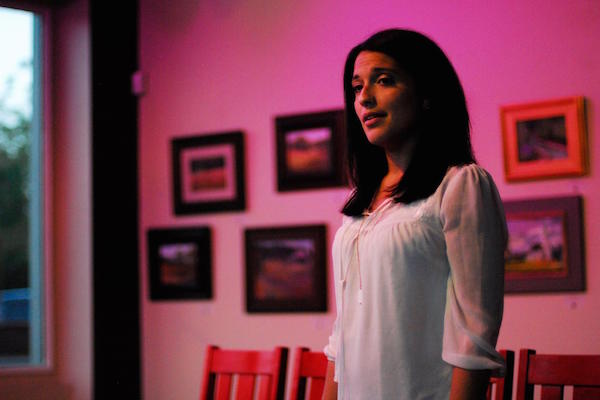 Orgullo: A Pride of One Acts tells moving, effective stories that resonate with truth

I was quite nervous to attend Theatre Nuevo’s presentation of ten short plays, Orgullo: A Pride of One Acts, currently in production at the creative space at 1900 Park. Not because of the subject matter, which is an exploration of contemporary attitudes on race through situations that can be found in cities large and small across America. I was nervous because I don’t speak Spanish and was afraid that I would be lost; unable to follow the stories I was watching.

I’m happy to report that my nerves were unnecessary. Fluency in Spanish is not required to enjoy the thoroughly engaging, sometimes humorous, and always well-constructed stories presented. There were undoubtedly details and nuance that I missed in the Spanish dialogue, but the stories are primarily told in English. As importantly, the ensemble cast, featuring Robert Ayllón, Clayton Bury, Rahamses Galvan, Ann Marie Mohr, Jesse Muñoz, Ariel Saul, Gabe Taylor, Natasha Toro, Kelvin Urday, and Anna Skidis Vargas, does an excellent job adding context, expression, and action to convey each play’s meaning.

The show opens with “Brown Only,” by Alvaro Saar Rios, directed by Adam Flores. This piece is about actors, auditioning, and authenticity. Clayton Bury is a white guy who wants to audition for the part of Pancho Villa in an upcoming musical, even though there is a room full of Latino actors who can clearly handle the part. There’s an appropriate edge to this piece, and its truth made me a little uncomfortable for all the right reasons. Natasha Toro is powerful as a woman trying to balance the inequities of assimilation, family loyalty, and respect for the law in “No Apologies – Our Song,” By José Casa, directed by Skidis Vargas. Even though the audience can sense where the story is headed, the show still delivers a shock.

“La Cita,” by Carlos Manuel, directed by Toro with assistance from Manuela Kalamboukas, features Skidis Vargas and Ayllón as a therapist and client dealing with the ramifications of frustration and anger. The script that features a genuinely unexpected twist that is as eye opening as it is laugh inducing. As I struggled to comprehend some of the speedy Spanish dialogue in this one, I found myself able to tap into the emotional context of the play in a personal way.

“La Cocina de Jorge,” by Gregory Fenner, directed by Ayllón, reminds me how powerful economic status can be, and how often it is used to entice or take advantage of others. Toro and Muñoz are sympathetic, with a good connection that helps deliver the conflicting emotions the story engenders. The closing piece of act one, “Menudo Pops,” the second by Alvaro Saar Rios, directed by Skidis Vargas, pushes this idea further with a satirical commercial and unnaturally perky performances by Galvan, Mohr, and Urday.

The second act opens with of “No Apologies – Muñeca,” another play by José Casas, directed by Skidis Vargas. This is the only piece entirely in Spanish, for which a translation is included in the program. In a conversational monologue, Galvan tells the story of a young father working hard to build a better life for his family and, particularly, his young daughter. The depth of feeling, the sense of both hope and desperation, is palpable whether you understand every word or not. Galvan clearly communicates that he understands the risks he’s taking but is more concerned about his family’s welfare.

“Byzantine,” a thoughtful play by Tlolac Rivas, directed by Christina Rios, follows Galvan’s monologue. A play about connection, it mines the idea that each of us has a story to tell and the opportunity to make a positive impact. Actors Muñoz and Mohr are at first hesitant, then cautious, and finally make a tenuous but important connection. Though not at all heavy handed, the story reminds us we have much in common, while emphasizing that listening and compassion matter.

“Never Mess with a Mexican Girl,” by Miryam Madrigal, directed by Gabe Taylor, is a delightfully humorous retelling of “Little Red Riding Hood,” with a Mexican heroine. Toro lets the character’s personality shine, and Galvan and Urday contribute to the humor while Saul provides spirited narration. “Exotic,” by Melinda Vargas, directed by Kathryn Bentley, probes personal identity and challenges the effects of careless or casually slung adjectives we often use to label others. The script is conversational, and actors Skidis Vargs and Taylor ensure the message hits home without berating. Nathan Jatcko’s humorous sketch with song, “I’m Casting A Vote,” directed by Ayllón, closes the evening with a cheerful nudge for audience members to get out and vote. There’s no overt politicking here, just a tuneful suggestion.

“Orgullo” is the Spanish word for pride, and pride is apparent in the selected plays and direction. The ten stories tell of the Latino experience with contemporary, relatable stories that could happen in almost any community in the United States. But each story is varied, with truths and complexities that represent the fullness of life, not simply a single perspective. Rather than focusing on fancy sets or big production numbers, Theatre Neuvo demonstrates a deep commitment to storytelling with this production. And storytelling is what makes Orgullo: A Pride of One Acts, in performance at 1900 Park Avenue through July 24, 2016, such a compelling evening’s entertainment.