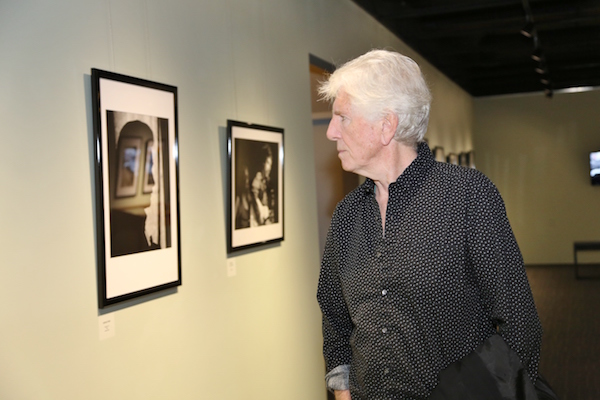 In 2013, St. Louis gained yet another cultural institution, adding to its already impressive collection of history, art, and science museums. After embarking on its largest-ever capital campaign, the International Photography Hall of Fame and Museum (IPHF) relocated to St. Louis' Grand Center district, choosing our great city because of the richness of our cultural institutions and deep connection to the history of photography. (I bet you didn't know St. Louis is home to one of the oldest camera clubs in the nation.)

Celebrating their 50th year of honoring photography, the museum's current exhibition showcases the important work of its class of 2016 Photography Hall of Fame Inductees. Names we may know well -- like Annie Leibovitz and Ernst Haas -- make up the cohort of inductees, alongside other familiar names that we may not typically associate with photography, such as documentarian Ken Burns and technology entrepreneur Steve Jobs. These pioneers, along with John Knoll, Thomas Knoll, Graham Nash and Sebastião Salgado were inducted into the Hall of Fame because their work embodies the spirit, artistry, and innovation of modern photography.

IPHF is for more than those of us who love a still photograph. Inductees (and brothers) Thomas and John Knoll -- co-creators of Photoshop -- and Steve Jobs, co-founder of Apple, are honored as inventors that changed the field of photography. You might also be surprised to find that English singer-songwriter Graham Nash isn't just a musician -- he is also a notable photographer and founder of Nash Editions, a fine art digital print company that developed a printer capable of reproducing digital images in large-scale, high-quality formats. You can view the 1987 version of one color printer adapted by Nash Editions on display at the museum. (And yes, it's just as big as you might expect.) You'll also find a collection of early Photoshop user guides (floppy discs included!) and a 1984 Macintosh computer to round out your trip down memory lane.

For me, these moments in the exhibit really demonstrate the museum's commitment to celebrating not only the great artists behind the camera, but also those who have influenced the field of photography beyond their skillful use of a camera. In addition to the Knolls and Jobs, documentary filmmaker, Ken Burns, is also recognized for his now iconic style of presenting archival photographs in films. Many of the newest Inductees are honored for having revolutionized both the photography industry and creative world in ways other than just taking breathtaking photographs. But don't worry: there are still plenty of photographs at the museum.

Annie Leibovitz's work as a photographer for Rolling Stone, where she captured many of the iconic celebrity portraits we remember today, can be viewed on display. Sebastião Salgado's corner of the museum boasts a small collection of his black and white documentary photography of Mexican and Brazilian laborers, as he is known for documenting a wide range of socioeconomic conditions that affect human life across the globe. Ernst Haas, pioneer of color photography, composed a 24-page, color photo essay of New York City for Life, which you can find arranged in his portion of the gallery. These eight artists join the Hall of Fame, which now honors 79 total inductees, including notables such as Ansel Adams, Diane Arbus, George Eastman (founder of Kodak), Dorothea Lange, and Gordon Parks.

What better way to see the photographic work of a two-time Rock and Roll Hall of Fame inductee, Graham Nash, pioneer of color photography, Ernst Haas, and the celebrity portraits of feminist trailblazer Annie Leibovitz all in one place than to visit the International Photography Fall of Fame and Museum? A hidden gem at the heart of Grand Center, the "Hall of Fame Induction and 50th Anniversary Celebration" exhibition is open now through February 4, 2017 at IPHF, located at 3415 Olive Street. The museum is open Wednesday through Saturday 11 a.m. to 5 p.m., and until 9 p.m. on the first Friday of each month. Admission is $5 for adults, $3 for students, seniors, and military, and free for IPHF members and visitors under 18.

Elizabeth Eikmann is a graduate student in the Department of American Studies at Saint Louis University. Contact her via email at This email address is being protected from spambots. You need JavaScript enabled to view it..