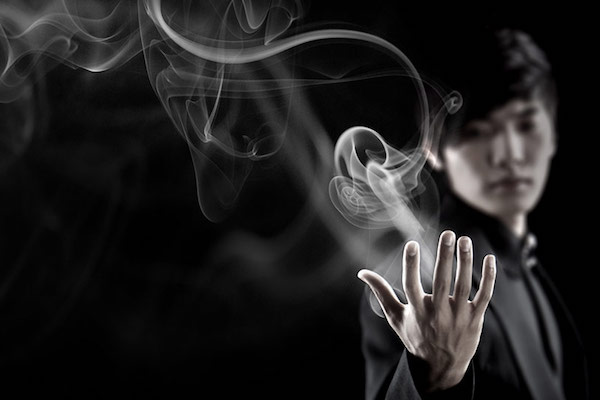 'The Illusionists': Playing with reality at the Fabulous Fox

The art of illusion has been with us since there have been people who have had the desire to mystify, and people perfectly happy to be mystified. Street performers who "float," flimflammers misdirecting attention with fire, vanishings, or appearances from seemingly nowhere while accomplices liberate audiences of their purses (or watches!), mimes who create an invisible reality, optical illusions -- the variety of illusion is endless, and the process of making the impossible seem possible usually evokes puzzlement, awe, and astonishment.

The Fabulous Fox was recently the site for a showcase of illusion, with thousands of people subsequently leaving the theatre asking, "How'd they do that?!?" The Illusionists: Live from Broadway featured seven performers of varying talents (and varying levels of entertainment, IMHO) in a two-hour show. They had the old (fire eating), the new (add a mobile phone), the borrowed (from Houdini), and even the blue (ah, the double entendre).

The sequin-bedecked MC, Jeff Hobson (aka "The Trickster"), was smooth as a baby's backside and professional out the wazoo. Not only was he the resident comic (although most of the performers exhibited humor in their scenes), he was also seamless in bits such as watch-stealing, fire-eating, producing a specific folded card from his mouth, and was a master at making fun of people in such a way that the audience was not laughing at them, but with them.

Multi-award-winning master of card manipulation An Ha Lim ("The Manipulator") astounded with his slight-of-hand while handling playing cards. Although his initial act--producing seemingly hundreds of cards from nowhere--didn't vary much and went on a bit too long, his close-up work at the end of the show was truly impressive.

Andrew Basso's "Daredevil" recreated Harry Houdini's Chinese Water Cell escape. While amazing that he was able to hold his breath long enough to extricate (with a paper clip!) his handcuffed, padlocked, upside-down self from a chamber of water, it seemed somewhat routine and dated.

Outdoing Chris Angel with his tattooed, whitewashed skin, wild hair, and grunge wardrobe was Dan Sperry ("The Anti-Conjuror"). His initial illusion of "pulling a lifesaver out of his neck," was OK, as was his "slicing open his arm" to retrieve an audience member's bloody quarter. However, his second-act skill of producing a flock of doves that transmutated into a cockatiel was impressive.

"The Deductionist," Colin Cloud, was truly a master of forcing events and information to achieve a desired (yet still awe-inducing) outcome, but given he isn't really able to read minds, I think the content of his two acts were (amazingly) TOO perfect to be believed without audience plants or clandestine research.

Use of a deadly weapon was the purview of Jonathan Goodwin ("The Daredevil"), whose use of a crossbow revealed a definite skill. Without that skill two female assistants might well have required medical attention!

The illusionist with mixed success, in my opinion, was Kevin James ("The Inventor"). He sweetly astounded a young audience member with a dancing piece of paper, but his bits animating a set of clothing into a person, making "snow," and cutting a person in half seemed somewhat obvious and cheesy and less than worthy of "one of today's most ground-breaking and innovative illusionists."

Many of the acts required the participation of people pulled from the audience. But, like the show itself, the use of (we assume!) unpaid and unwitting assistants varied in level of entertainment success. This is always a concern for performers who need them, because, like a box of chocolates, they're "never sure what they're gonna get."

In all, The Illusionists produced not a rabbit out of a hat, but an enjoyable and entertaining evening of puzzlement, awe, and astonishment...How'd they do that?!?