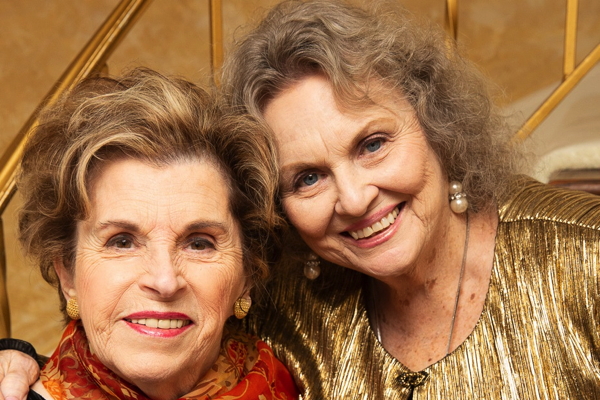 Preview: Shirley and Donna invite you to 'Say Yes.'

Chuck Lavazzi (CL): You two have very different backgrounds as far as performing goes. Donna has a long career here as a stand-up comic and actress but Shirley just got the performing bug relatively recently. How did you meet?

Shirley Aschinger (SA): Chuck, I met you and Donna in the 2008 Cabaret Conference. You sang "The Vatican Rag" and Donna sang "The Way We Were". I sang "I Whistle A Happy Tune". It was my first time on stage since college. Like Donna, I had been singing, dancing and performing all of my life, but in my case it was to my overflowing imaginary audience. After I did the patter, and sang "Whistle", my friend of thirty years said, "I didn't know you did stand-up!" My answer, "I've been doing stand-up for years, but at four foot ten inches, who knew?"

CL: What made you decide to team up for a cabaret show?

Donna Weinsting (DW): When we met at the Cabaret Conference, I immediately felt Shirley was a kindred spirit and a fellow "golden oldie". I knew Shirley would like to break free and have her own cabaret and I thought doing it together would be a great way to break the ice and be a whole lot of fun for us both.

SA: The idea for this show began November 9, 2018. We were at the West End Grill having dinner, awaiting Katie Dunne McGrath's "Favorite Aunt of the Year" show at the Gaslight Theatre. Donna pulled up a chair next to me, sat down and said, "It's Hell to get old." I said, "I'm way older than you are and I feel fine." We talked a bit about getting older, and then she said, "We ought to do a show together!" I looked behind me to see who she was talking to. Oh, my goodness, Donna was talking to me. Even then, I thought that was just something to say pre-cabaret show, like "Let's do lunch", but a few weeks later I found out she was serious.

WOW! It has been a ball getting to know Donna better, and with Ken Haller, and Carol Schmidt, what could possibly go wrong?

CL: Yeah, Carol is a pretty amazing music director and arranger. I've known Ken for years as an actor and singer. What's he like as a director?

SA: This is my first experience with any show director, so I have no one to compare him to, other than the conference directors, - then again, as all of us know, Ken is beyond compare. Ken is organized, a quick problem solver, a pro on and off stage, and engaging with an eager smile, and facial expressions that would fill a phone book. He understands comedy, and how and why it works. Ken Haller and fun seem to go together nicely. I couldn't be happier working with Ken.

I can't remember when I started working with Carol - always a joy to have her get me ready for the Cabaret Conferences.

DW: Ken is a delight as a director. We have fun and he has great ideas that help make us better. He is a caring and excellent pediatrician and can use that bedside manner in handling a couple of women in their second childhoods. Lastly, as a seasoned and very talented cabaret performer he knows how to craft a show to showcase talent in the best possible way. Love our Ken!

CL: The title of the show is "Say Yes." Who picked that title and what does it mean for each of you?

DW: "Say Yes" is a song Shirley has In her repertoire and seemed perfect to us as life affirming and a battle cry as we enter the last leg of our journeys. We are saying yes to life, challenges and making dreams come true.

SA: Originally, I chose the song to sing as a solo. The lyrics spoke to me, because I was saying YES to so many things I never dreamed of even saying MAYBE to. I was saying yes to Cabaret, to Open Mike Night, to storytelling, to writing patter, to writing a story about my father that was published in Joe Holleman's book in 2009 called "Rollin' On The River - The Story Of The Admiral In St. Louis." By their actions on one evening cruise, in 1943, the Admiral saved my father's life.

In a similar way, I believe Cabaret saved mine, or certainly expanded it in a spectacular fashion. My surviving cancer gave me the courage to say YES to life in so many ways. I began at seventy-three, saying YES to the next song, the next Cabaret Conference, and knowing and partying with so many lovely people.

Most people my age are searching for a funeral director, so finding a show director named Ken, and playing with Carol, Donna and Ken in the Cabaret Sandbox, sounded much more exciting. Ken chose "Say Yes" as the show title, and thought it would be great as a duet. We agreed.