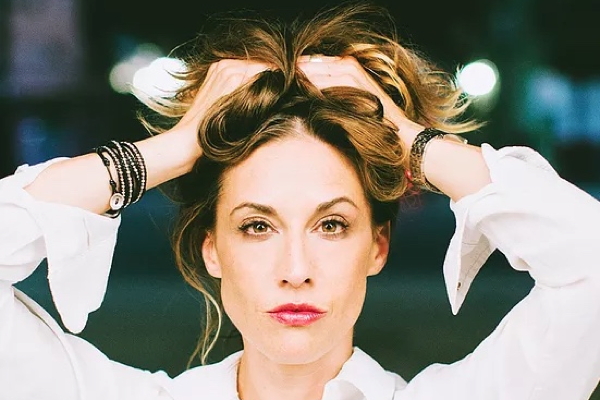 Review: Lisa St. Lou and Tor Hyams are a Dynamic Duo at the Blue Strawberry

There's no doubt about it, Lisa St. Lou and her music director/song-writing partner Tor Hyams are the Dynamic Duo of song performance.

Ms. St. Lou has a powerful, flexible, wide-ranging voice with which she can apparently do pretty much anything. She can purr and roar, cry and laugh, go intimate one moment and bigger than life the next. She's the real deal, with enough energy to power a small city.

Mr. Hyams, for his part, is a muscular, barrelhouse-style pianist who bangs out power chords like Dr. John on steroids. His voice blends perfectly with Ms. St. Lou's in their many duet numbers. Together, they are an unstoppable force of nature.

So, yeah, their new show "Ain't No Good Man" really rocked the Blue Strawberry last Wednesday (November 27) and got an enthusiastic reception from a crowd that appeared to consist mostly of family, friends, and former Ritenour High School classmates of Ms. St. Lou, who hails from our fair city originally.

That local connection was also, unfortunately, a bit of a liability for those of us for whom she was a total stranger. There were too many "shout outs" to friends of Ms. St. Lou and Mr. Hyams and far too many little in-jokes shared with the people they knew well. A little of that is entirely understandable when you know you have a bunch of fans in the house, but there's a point at which it begins to feel like someone else's party.

My other issue with the evening was that it wasn't really a cabaret show so much as a live performance of all the studio cuts on their soon-to-be-released album "Ain't No Good Man." The album itself boasts a stellar assortment of New Orleans-based stars such as Ivan and Cyril Neville (nephew and brother, respectively, of the legendary Aaron Neville) and the great Irma Thomas, a.k.a. "The Soul Queen of New Orleans." Without all that aural variety and big band backup, the songs--all originals by Ms. St. Lou and Mr. Hyams--had a kind of sameness that had me checking my Fitbit more than once.

That said, many of the individual songs were pretty potent stuff. "Never Enough for a Man" (a duet with Ms. Thomas on the album) was a rich blues number about the pain of being seen as a continual disappointment. The title cut, "Ain't No Good Man," spoke persuasively of the despair that comes from being betrayed by a loved one (in this case, Ms. St. Lou's ex-husband). "Miracle in Motion" was a soulful portrayal of love at first sight. And who could resist the affirmation of "I've Seen the Light"?

There was, in short, some solid material here. What "Ain't No Good Man" needs right now, in my view, is a director who can suggest between-song patter that goes beyond memories of the recording sessions and who can help give it all a dramatic arc and sense of pacing that would make it more of a cabaret show than a set list.

This was Lisa St. Lou's second visit to Mound City. I missed the first one because of schedule conflicts but I hope to see her here again, maybe with a more varied mix of material. She and Mr. Hyams have, I think, the talent and dedication to make whatever they decide to do next a hit.

Meanwhile, the Blue Strawberry has a veritable cornucopia of shows scheduled into next month. Visit their web site for a complete list.