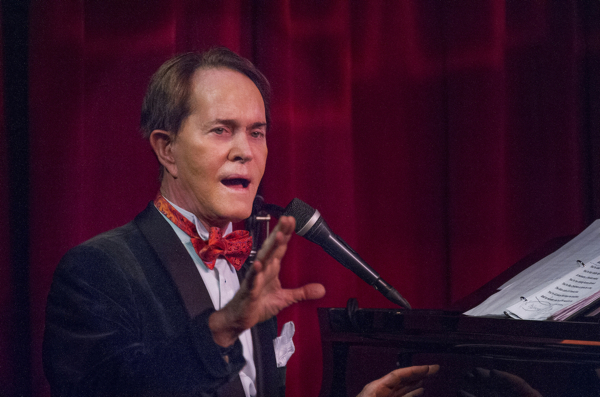 Steve Ross was back in town—and he was brilliant!  This cabaret legend appeared at the Blue Strawberry for two nights (November 26 and 27), and his performance was a cornucopia of wonderful music and delicious lyrics—presented with masterful talent and more than a soupçon of wit and sophistication.

Ross was long ago dubbed “the Crown Prince of Cabaret”.  His career glitters with every major award in the field of cabaret—including a Lifetime Achievement award and his induction into the Cabaret Hall of Fame.  And (to me) topping all those other honors:  Al Hirschfeld has drawn his caricature!

Manhattan’s Algonquin Hotel has a famous cabaret, the Oak Room (think Dorothy Parker).  It was closed for some years, and when it re-opened in 1980 Steve Ross was its first star and regular.  He has performed to acclaim around the world.  I first became acquainted with this marvelous talent exactly twenty-six years ago when he visited the Grandel.  God bless Jim Dolan and The Blue Strawberry for bringing him back once more to our town.

Mr. Ross is supremely, confidently retro in his programming.  He focuses on the Great American Songbook and the great American song-writers.  And he treasures the great American lyric.  No other cabaret artist will give you such attention to lyric—to its intricacies, it’s wit, and its wisdom—as Steve Ross.

He began with a jaunty medley indicating his eager readiness for the evening.  He does indeed have “a shine on his shoes and a melody in his heart.”  He welcomed the audience—an audience which was (as he says) “small, but perfectly proportioned”.   I was told that on Friday the house was packed, but on Saturday . . . well, not so many.  How in the world should such a major talent draw such a small audience?  But it did give those of us attending a lovely feel of the perfect intimate cabaret.  Steve Ross does indeed give us that cabaret, straight from Plato’s Realm of Ideal Forms.

His rendition of Hoagy Carmichael’s “The Nearness of You” was soft and warm and oh-so romantic.  Ross’s voice can be as smooth as brushed leather, and his diction is unfailingly crystal clear.  His very life has been dedicated to the lyric, and his masterful phrasing delivers the subtlest nuance of the lyricist’s meaning.

The evening had many beautiful lyrics and many very funny lyrics—and a time or two some lyrics that are rather risqué.  One song that brought the house down was Eddie Cantor’s novelty “Hungry Women” in which a man bemoans the vast expense of dating—and feeding—hungry women.  “I feed ‘em and weep.  They never eat cheap.”

The evening was nicely structured.  There was a medley on time, which included Jim Croce’s “Time in a Bottle”.  There was a whole section on Paris, which Ross clearly loves;  he gave us “Whenever I Think of Paris” (co-written by Ross and Barry Day), Charles Trenet’s “La mer”, and a wonderful instrumental handful of Edith Piaf’s most beloved songs.

Noël Coward is dear to the heart of Steve Ross.  (He has made pilgrimages to most of the many places Coward lived.)  And Ross does Coward songs with wit and class that fit them perfectly.  We heard the romantic operetta waltz “I’ll Follow My Secret Heart” and the richly sardonic “Mrs. Worthington” (in which Coward urges a mother not to let her very ugly, very untalented daughter pursue a career in theatre.)

It's unclear who actually wrote the Kingston Trio hit "Scotch and Soda " (although Trio member Dave Guard holds the copyright) but in any case Ross sang it as if it were three o’clock in the morning—in a slow, easy walking tempo.  Gorgeous!

And of course he doesn’t forget our loss of Stephen Sondheim.  Ross gave us a warm, gentle, intimate “Send in the Clowns”.  It’s simply mesmerizing.

Perhaps no-one ever wrote cleverer lyrics than Cole Porter, and we were  given a great scoopful of his numbers:  “I Get a Kick Out of You”, “Anything Goes”, “Every Time We Say Goodbye”, “Manhattan”, “Down in the Depths (On the Ninetieth Floor)”, “Just One of Those Things” and others.

Bob Hope is inseparably associated with “Thanks for the Memory”—but Steve Ross made it his own in his gentle interpretation.  It was heart-breaking!

Ross displayed his splendid talent as a pianist throughout the show, and especially in a couple of numbers for piano only (no singing).  His arrangements are rich, often complex—but he can touch your heart with a sweet melancholy melody played with just one finger.  He is a master of dynamics—from the softest touch to commanding ferocity.  And he uses the piano to decorate the lyric with a brief lick to show us “stars” or “flying” or “a crash”.

The crowd at the Blue Strawberry, though smallish, received Steve Ross’s evening of cabaret with enormous, richly deserved enthusiasm.  Steve Ross has been the acknowledged “Crown Prince of Cabaret” for—what?—some fifty years now.  I think it’s about time we promote him to “King”!