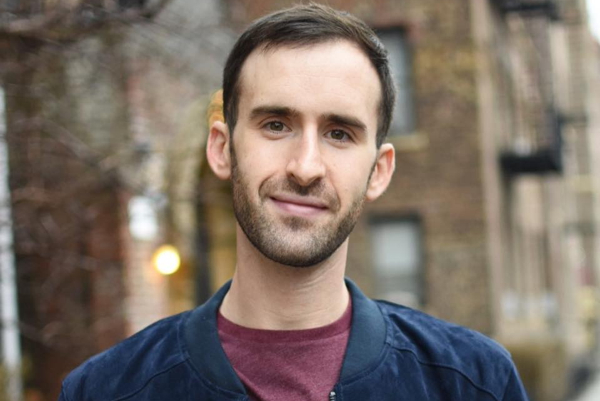 Review: A Little Song, No Seltzer: Eric Williams at the NJT

When I signed up a few weeks ago to review a recent "Cabaret at the J" performance with the New Jewish Theatre at the SFC Performing Arts Center, it was entitled "A Little Song, a Little Dance, a Little Seltzer Down Your Pants!" It was to star St. Louis-connected cabaret/theatre personalities Eric Williams and Sharon Hunter on the 18th and 19th of December, 2021. Well, time and Covid concerns and cautions did not giveth, but tooketh away Ms. Hunter, leaving Mr. Williams to scramble together a show with expert accompanist Ron McGowan. Although I was personally disappointed not to see Ms. Hunter, with whom I've worked in the past, I would say Mr. Williams gamely tackled the show as a solo.

Given the pulling together of the playlist only a few hours before the performance, it's understandable that the results weren't well-rehearsed, and I must say I did think Mr. Williams started off a little tentatively. But, hey, this is a cabaret, which to me is a person, usually all alone on a stage, laying their talents and their life before an audience, just hoping such offering will be well received, and it doesn't need to be rehearsed out the wazoo. Oh, and it was well received. Mr. Williams not only gave us song, but much openness about his life and loves, always a help to allow us to connect more fully with an artist.

Songs started with a bit of "Oh, What a Beautiful Morning" from "Oklahoma," but quickly took a turn to an official opening with "Bewitched, Bothered, and Bewildered," a Rodgers and Hart classic. This was followed by "Miracle of Miracles" from "Fiddler On the Roof", a bit of Italian opera, "My Yiddishe Mama," and a Disney Medley. As to this last, it appears Mr. Williams, as a child, wanted to be a Disney Princess, and here he lived out his wish with selections by Arial, Belle, Mulan, Jasmine, and (I believe) Anastasia. Then we got a touching "Maria" from "West Side Story" (as he gushed on the currently-showing Spielberg movie version).

As I indicated, I thought the show may have started a little tentatively, but by the next song, "Marry Me a Little" from Stephen Sondheim's musical of the same name, Mr. Williams had settled comfortably into himself and the songs, and I thought this song his best offering of the night.

The rest of the hour continued with "She Loves Me" from the show of the same name, and "Ten Minutes Ago," the Rogers and Hammerstein beloved classic from "Cinderella." Following was an interesting contribution of a song Mr. Williams penned the lyrics for himself. Having told the largely Jewish audience he would NOT be singing a Christmas song, he came forth with a clever, "Have Yourself A Merry Little Hanukkah."

It seems Mr. William's past theatre work included a stint with a travelling tour of "Elf," playing the titular very tall (!) member of Santa's team who leaves the North Pole in search of his real father. So, the next selection, "Worlds Greatest Dad," was very apropos.

The show ended with "What I Did For Love" from "A Chorus Line."

So, I didn't necessarily see the show I thought I was to be seeing, but it was still a pleasant night of music at the "J" for all concerned.