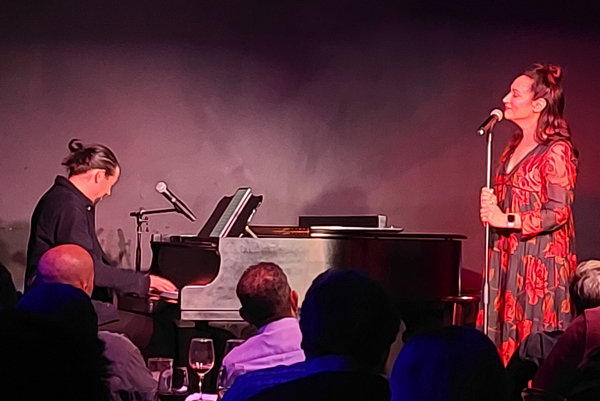 "Wicked" is one of my favorite musicals ever since I saw the original cast back in 2004. I’ve also seen it twice at the Fabulous Fox. Idina Menzel, Stephanie J. Block and Marcie Dodd.  Powerhouse performers, to be sure! Eden Espinosa was in the original cast as Idina Menzel’s standby and I must have seen her in the ensemble. But never as Elphaba. So, I was excited to discover that she was performing at The Blue Strawberry on March 13. Sadly, I didn’t get to see her entire cabaret since there was a mix up in show times. I got there about 15 minutes after the show started and she was singing one of my favorite musical theatre songs, "I Miss the Mountains" from "Next to Normal." Despite missing the first few songs, sneaking in with her singing that song indicated that I was in for an enjoyable evening.

I was pleased to find out that she and I share a massive love for the late singer/songwriter Eva Cassidy. In 2012, Ms. Espinosa performed a cabaret of Cassidy’s music at Feinstein’s/54 Below. Ms. Espinosa’s rendition of Sting’s "Fields of Gold" with Cassidy’s unique arrangement was angelic and sensitive, showing her skills as not just a belter but also as soulful chanteuse. Suddenly, she turned to her music director/accompanist, Rodney Bush and said, “I need some Celine in my set.” I congratulate her on her bang-on Celine Dion impression in a few phrases of "My Heart Will Go On."

One of the things I love most about cabaret is hearing songs I’ve never heard before. And I got that here. However, some of the songs were so foreign to me I couldn’t distinguish the songs’ titles to look them up later. They were sung well, but not extremely memorable. Her foray into songwriting was enjoyable with her beautiful original song, "I Will Not Back Down," that she wrote during COVID by looking through some of her old diaries.

The evening then turned to audience requests which was unusual and a pleasant surprise. My first thought was, “Wow, she’s really going to showcase her and Mr. Bush’s musical knowledge.” The full house then proceeded to throw song and show titles toward the stage. However, it turned into a variety of acapella phrases from shows Ms. Espinosa has performed on Broadway, in regional theatre and at Disney World that, in my opinion, went way too long. Snippets from songs without accompaniment soon turned into a time filler more than an entertaining devise to include the audience. During this segment, her dress got caught on her heel when seated and, like the pro she is, she amusingly taught the audience to “always do a dress rehearsal in your show clothes so you don’t get any surprises during the performance.”

I am a fan of artists reinterpreting music typically made popular by a different gender. Ms. Espinosa graced us with a gorgeous version of the Neil Diamond song, "Lady Oh."

Rodney Bush showed his tremendous skill as a piano artist throughout the entire show but was especially stunning in the final song’s solo (I think the song’s title was "Children of the Earth").

Who doesn’t love John Lennon’s "Imagine" for an encore? The song is especially timely, with the unrest both in Ukraine and here in the U.S. and Ms. Espinosa’s arrangement was both stirring and touching. She left us with the thought-provoking observation, “When you ask someone, ‘How are you?’, take the time to listen.” I couldn’t agree more.  We never know what people are going through on the inside, no matter how they present themselves on the outside.

Despite two very talented performers, the show seemed hastily assembled without any overarching story or theme. I’m glad I finally got to see Ms. Espinosa perform, even if the show, at least what I saw of it, was a tiny bit underwhelming. Overall, a pleasant evening of good music by strong performers.