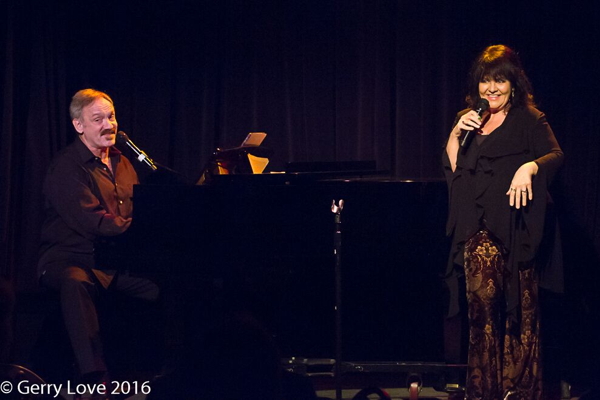 Full disclosure: I have been a huge fan of Lina Koutrakos and Rick Jensen for about ten years. They have been teachers of mine at cabaret conferences in St. Louis and in Greece. (Yes, Greece!) Rick has played shows for me in St. Louis and New York. So this review is not going to be about whether they're wonderful or not. They are. It's going to be about the kind of wonderful they are and why you should always seek them out and spend time with them whenever you can.

After All Those Love Songs, which Rick and Lina performed at the Kranzberg Arts Center in St. Louis on Friday, January 20, 2017, showed them at the top of their form and was a master class in the art of cabaret. Cabaret, of course, is about telling stories through song, about getting to know the performer a bit better, and about receiving gifts of music from the singer and accompanist in a menu of a dozen or so songs. Sometimes that is accomplished through a narrative that links the songs. For Lina and Rick, their easy camaraderie is that narrative, and if their show has a theme, it's about keeping those people you love in your life close and always letting them know how much they mean to you. This starts with the very first song that gives the show its name. Written by Rick and beautifully sung by both him and Lina, it is a meditation on facing the world when the love songs have ended. Lina then followed with a song that she wrote, "Mess Out of Love," about, well, making a mess out of love.

Now, if this is making this show sound like a downer from the start, it is anything but. This is a show for grownups, for people who have been around the block and have had their heart broken yet still look for joy and beauty at every turn. In these songs Lina and Rick are not just writing You-Done-Me-Wrong lamentations but wise and deeply felt meditations on modern love.

And there's plenty to laugh about too. In particular Rick's original "Heigh Ho, That's the German Way" about growing up in Minnesota occasioned a story that included an eccentric cast of characters from his hometown, including one Mary Hosnoggle, who would not be out of place in Lake Woebegone. Rick's guileless and hilarious delivery of both story and song even occasioned an audience singalong, making this the comedic high point of the evening. Another Rick original, "New York Is My Home" -- where  Rick's clever, soulful accompaniment included filigrees from Kander and Ebb's "New York, New York" and Billy Joel's "New York State of Mind" -- was so achingly sung by Lina that I got to thinking maybe it's time for me to move there myself.

While many of the featured songs were written by Rick and Lina, there were also more familiar songs. I was especially moved by Lina's rendition of "I Remember" by Stephen Sondheim. This quiet ballad about a girl who yearns for a new life is a list song as the singer aches to recall elements of the world she left long ago. Lina's connection to the lyric and the specificity of her phrasing made this the most searing rendition I have ever heard of this song and brought me to tears. Lina and Rick also created a brilliant interpretation of Bobbie Gentry's classic "Ode to Billie Joe." Rick's inventive accompaniment compellingly mirrored the mental state of the narrator from matter-of-fact to meandering to just a little weird, and together he and Lina created a mysterious sonic universe where the singer and Billie Joe McAllister might have thrown just about anything off the Tallahatchie Bridge.

As for the songs Rick and Lina wrote, some were familiar to me, some were new. All were splendid. One concern in a show like this where the lyric must be paramount is, what happens when the audience doesn't know the song? In this case there was nothing to worry about. Both Lina and Rick displayed impeccable diction and phrasing that was nevertheless colloquial and never affected. Lina can go from an Eartha Kitt purr to a Janis Joplin growl, and the audience will not miss a syllable. And since I usually think of him as the "piano guy," I am always caught a little off guard by Rick's warm, embracing voice. The audience was as comfortable as if they were being serenaded in their own living room.

We in St. Louis are very lucky that Rick and Lina have developed such strong ties to our city, and they come here to perform quite regularly. Please do yourself a favor and be on the lookout for the next time they're here. You will thank me!